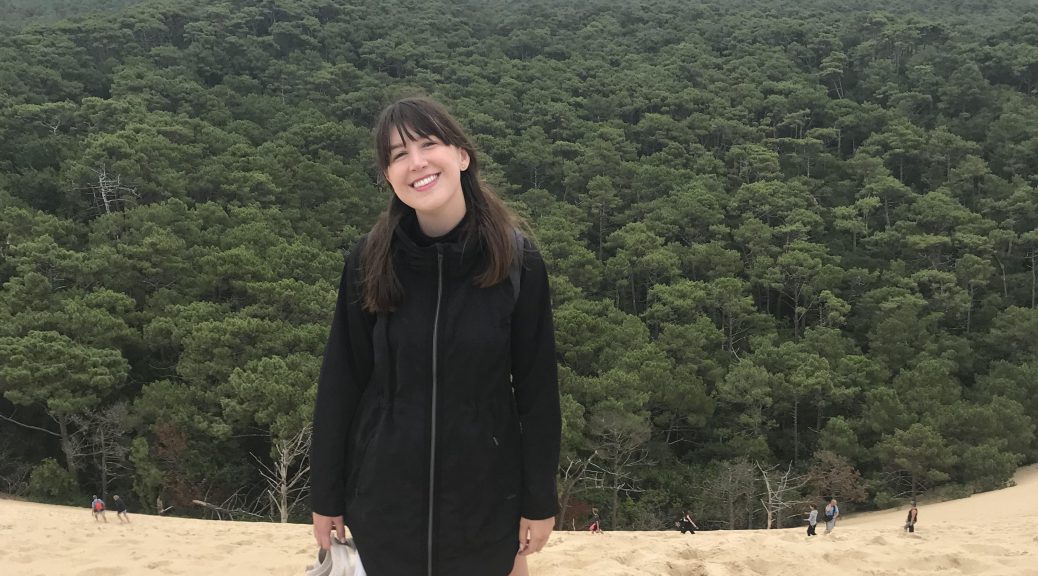 Featured image: standing on top of the Dune du Pilat during an excursion in Bordeaux

The other day as I was video chatting a friend from home, she asked me to describe Paris. After some moments of reflection, the best I could come up with was: Paris? It’s, uh, very Parisian. And though at the time it sounded silly, I later realized that it was true. Paris is very Parisian. Here, the people smell nice, but aren’t always as outwardly nice themselves (a very American perspective, I know), baguettes are quite literally eaten with every meal, and life moves faster than you can say La Tour Eiffel.

To be fair, however, I’ve only been in Paris for a little over three weeks. Before then, our program spent two additional weeks in Bordeaux as a sort of pre-orientation, orientation. There, I quickly came to terms with the fact that one, I hadn’t spoken French all summer, and two, that I barely knew any of the other students on the program with me. Gradually, though, with the help of daily four-hour French classes and plenty of free afternoons to make new friends, I began to feel better about my decision to study abroad. The program-sponsored wine tastings and semi-regular trips to the beach with my host family didn’t hurt, either.

Not long after I’d begun to feel settled in, however, was it time to head to our final destination: Paris. Yet, before I jump right into my adventures thus far, let me give a little backstory. In accordance with Vassar-Wesleyan Program policy, none of us received our Parisian homestay assignments until about 48 hours before arriving in the city. You can imagine my nerves, then, sitting in the back of the airport shuffle, hurdling towards the city center with not much more than a phone number and address. Rolling up to the apartment building with my boulder-like suitcases, I paused for a moment to take in my surroundings—just a few hundred feet away was L’Arc de Triopmhe, massive and imposing, reflecting the midday sunlight off its white marble façade. I had a good feeling.

I was right—my host family has been more than I could have ever hoped for. Besides making the occasional faux-pas (think, eating dinner barefoot or accidentally locking my closet shut), I’ve learned a lot linguistically and culturally. What began as me tentatively commenting on the weather has evolved into absorbing conversations about the French political landscape and my hopes for study abroad. What’s more, I’ve even learned to be a cat person! Berlioz, my 13-year-old “host cat” has taken to greeting me at the door and curling up on my bed while I do homework.

Outside the apartment, though, Paris has been an experience. Being a student in France is quite different from being one in the United States—since there are no dormitories, social life revolves around bars and clubs, classes tend to be larger, and professors typically give students more freedom of choice when it comes to evaluations. Though I’ll admit that I miss walking home to Raymond after class at Vassar, temporarily adopting the lifestyle of a Parisian student has been suiting me. With daily commutes on the aboveground metro, I get to see spectacular sunsets on La Seine and observe some interesting interactions. I also really appreciate the abundance of student discounts on everything from food, to train tickets, to books.

Overall, it’s been a whirlwind first month. Though I sometimes feel homesick for loved ones and things like chicken noodle soup (who knew it would be so hard to find broth in France), I’ve also begun to establish a new home here. On days like today when I’m heading home from a friend’s apartment, hearing the familiar rev of mopeds and smelling the warmth of freshly baked bread, I feel like I belong. Here’s to another month of study abroad.