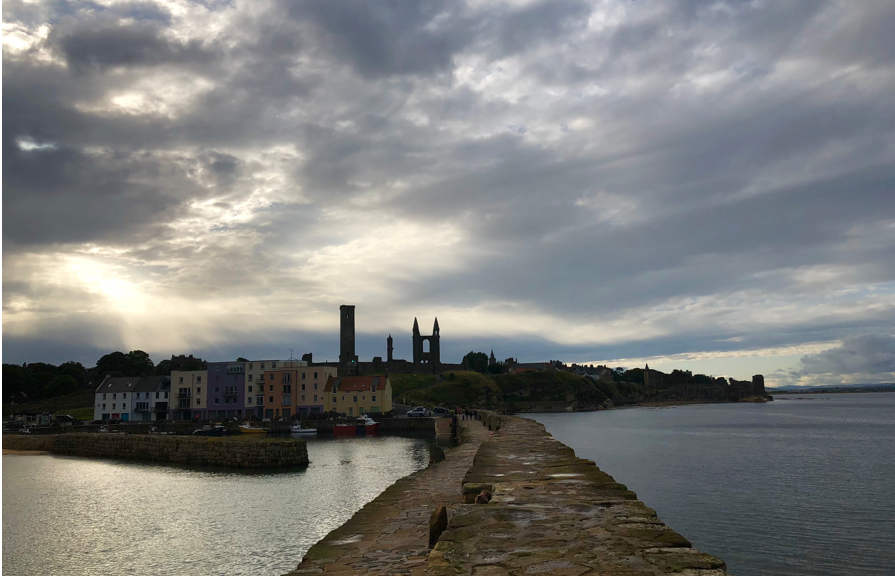 The hardest part about a trip for me is before the trip even begins. Pre-trip anxiety totally crushes my previously held excitement about a global adventure. As a frequent world traveler, one would expect that the pre-trip anxiety would be quelled over time. However, days before heading out to study abroad in Scotland, it hit me hard. I’ve been to Scotland twice before and loved it every single time. I even visited St. Andrews the summer before moving in and was so excited to move in. However, when it came time to leave home, it felt like something was ending or tragically different. It felt like I was starting over.

I thought about having to make new friends, getting to know new faces and new places, and the dreaded ice breakers that were to come. The uncertainty of it all turned my last few days at home into a tragic countdown. I got no sleep and felt on the verge of getting sick for 3 days before leaving for the trip. I had true bags under my eyes for the first time in my life. As one does, I googled my symptoms. Naturally, I got results from WebMd indicating that I was either pregnant, had cancer, or a common cold. Then, I added in that a trip was coming up. I found links about pre-trip anxiety. I found out that my response to this upcoming change was perfectly normal and actually fairly common.

After shakily making it through airport security, I was off on an adventure. I didn’t know which type it would be, but I was on my way nonetheless. After a 7 hour plane ride and a relaxed connection I was in Scotland. I was welcomed at the airport by friendly faces from the St. Andrews shuttle. I met a second-year student on the shuttle who promptly “adopted” me. I was not sure what this meant, and I was confused by the age difference and how that could be incorporated into parenting. She explained a system of “academic moms and dads,” where returning students “adopt” new students and take them under their wing for their time at St. Andrews. As we got on well, I was happy about my new “academic mom.” After meeting plenty of other friendly and eager new and returning St. Andrews community members on the shuttle, I had finally relaxed. These weren’t people who were out to get me by any means. They were simply other students with different accents.

I have noticed a few things about what appears to be Scottish culture after being here for just under a week. First, people here don’t really use their phones when walking around like Americans do. There is no awkward moment where you are on your phone walking and you pass someone, look up, make eye contact, flash a semi-smile, and then briskly break eye contact. People here actually say hello. It is not considered flirting or invasive by any means, it is simply a common courtesy. Phones are not an escape from socialization as they are in the United States.

Secondly, the party culture is very different. Parties don’t revolve around shotgunning and grinding with someone until you leave together. Parties are far more social. Even at the on campus club, Club 601, there is dancing but a lot of intermingled talking. People will gather in groups to just chat, even on the dance floor. House parties are nothing like TH parties. People actually talk and sometimes there’s no music  because they rely so heavily upon chatting with others there.

At Vassar, we know essentially everyone. We recognize every face, whether we have met them or we just know of them. Yet, this doesn’t mean that we will say hello. I’m not sure what the fear is of Vassar students to say hello or make eye contact and smile, yet it truly seems like a sort of epidemic. Possibly it’s the feared “what if they say hello and try and talk to me or if I say hello and they think it’s weird.” But who knows? The whole avoiding contact with others we don’t know very well is weird in the first place. However, we as Vassar students are weird in the big picture anyways.

Finally, everything at this university is very independently run. It could be that St. Andrews is run like a larger school, unlike Vassar. During Freshers Week, you are not babied by any means. You are told about a St. Andrews orientation app… maybe by friends who knew about it from a friend. It has everything you need to know and all the events. However, mandatory doesn’t actually mean mandatory. It’s not like Vassar where sometimes they take attendance and hunt you down if you weren’t there. There are not student fellow groups, so there’s no automatic friend group. There is not a move in crew to help you move all your luggage in. You must grow an extra arm… or two… good luck.

Their academic system is based upon independent learning. You may only have one 2 hour class a week for a class, yet outside of class you must read 2 books a week and have a presentation ready for the next class. Sometimes in the lecture, other students are teaching you. It seems to make people much more independent. The meal plan doesn’t include 3 meals a day every day of the week. Being only a week in, I’ve learned to live independently very quickly. And that is okay. Finally being here after anticipating it for months allows me to breathe and I am excited for classes to begin!