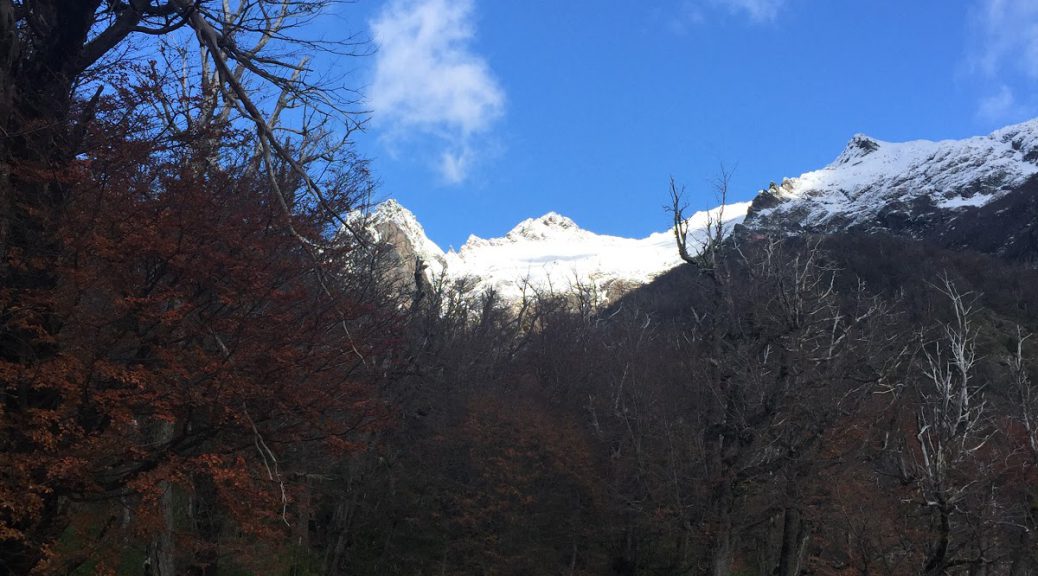 Featured image: Fall colors half way up a mountain in Patagonia—a refreshing break from dry Mendoza where all the autumn leaves change straight from green to brown

Greetings from the wintery half of the earth! Time has flown by here—the cold has set in, classes have almost come to an end, and I return to the US in less than a month. Recently a student in one of my classes asked me if I was ready to return to the United States, if I had gotten what I came for. I didn’t really know how to answer her because the things I was searching for here were not concrete beyond improving my Spanish. Though daily things will be easier when I return to the US, I do not feel ready to go back. I do, however, feel good about everything I have learned here—not just improving my Spanish and becoming accustomed to cultural norms—I have gotten well outside of my comfort zone and I feel like I have grown a lot as a person.

One reason I came to Mendoza was to escape the eurocentricity of the music program at Vassar, and Mendoza is home to one of the best music schools in South America. I have been able to continue taking viola lessons while also learning about folkloric music of Argentina, Chile, Bolivia, and Peru and taking a tango class. Some of my favorite experiences here have been playing in the orchestra of the university and singing in a choir. Since music is a language unto itself, I was able to easily integrate myself into both communities. The choir class was also a good way to work on my pronunciation since most of the repertoire was from Argentina or other Spanish-speaking countries.

I am going to miss Mendoza a lot—I love the familial feeling of the city, the laid-back culture of living in the moment, the siesta, and the food and drink. It will be so strange to be in a place where one has to travel more than a block to get empanadas! Of course, I will miss the people the most—I live with an incredible host mom and I have met lots of people, both other students doing exchange programs and students from Mendoza. I love the curiosity of people here: each person I meet asks me where I’m from in the US, how old I am, what I study, if I’m in a relationship, when I arrived in Argentina, and when I will leave. It’s difficult for me to think that in a few weeks I will likely never see most of the people I have met here again.

Not everything here has been good of course: the worst thing that happened was when my friends and I got stranded out in the countryside for four hours at night. We and about 10 other people who had also been hiking in the national park were left by the side of the road by the bus that was supposed to bring us back into town, leaving us out in the dark, foggy cold of the sierras of Córdoba. Luckily, we befriended the people we had gotten trapped with, and a bus did finally come around 9:30 pm.

There were many things that were shocking to me when I first arrived here: stray dogs wander the city, people take their young kids to restaurants and playgrounds late at night, people wear winter coats when it’s 65 degrees and sunny, and you encounter people cooking asados everywhere from street corners to the middle of construction sites. It is difficult to be surrounded by people who have lived such a different life from your own that misunderstandings arise easily, and not just because of speaking different languages. Small mix-ups and confusions happen to me on a daily basis—I’ll get on the right bus but going the wrong direction, I’ll understand the majority of what someone is saying but be lost because of not knowing one or two words, or I’ll find something that seems familiar but then turns out to be completely different—one particularly confusing moment was when I bought some yogurt and was unpleasantly surprised to find that it was actually more similar to cool whip than to any yogurt I have had.

The differences between the academic system here and that of the US never ceased to surprise me—public universities are free, which is wonderful, but does come at the cost of professors going on strike because they are not paid a fair wage. Classes are canceled somewhat frequently, and although this means that less material is covered in class, I feel it demonstrates how much more respect there is for people’s personal lives here compared to in the US. Argentinians have a much healthier relationship with academia and work than people in the US—here we are people with lives and families before we are students or professors, and I often don’t feel that way at Vassar. The low level of stress here is something I hope I will be able to bring back with me.

In addition to my grammar and general vocabulary improving, I have learned an incredible amount of regional vocabulary and idioms here. Argentinian Spanish is quite different from that of other countries—there is a lot of Italian influence, they pronounce the “ll” and “y” sounds with a hard “sh,” and they have an extra conjugation for second person that doesn’t exist anywhere else. Immersion here has changed the way my brain functions—as I write this, Spanish words and phrases pop into my head that would communicate something more elegantly or succinctly than in English. When I talk with the other students in my program, it works to use both languages at the same time, changing every other word or phrase, but unfortunately that won’t work with most people. I also now have problems with English when I’m not paying attention—I try to spell things phonetically and sometimes find myself using the wrong to/two/too or there/their/they’re. I’m very apprehensive about losing things quickly when I get back to the US, but hopefully I will be able to find some people to practice with over the summer.

One thing I am particularly dreading in the US is getting back into news and politics. Argentina has just as many problems as the US, but it has been nice to immerse myself into what’s going on here. Argentina’s historical as well as current situation is politically fraught—the current president is very right-wing and the country is on the brink of an economic crisis with unhalting inflation. However, there is tons of activism here that creates real change—the lower house of Congress here just passed a law to legalize abortion, which is a very exciting and surprising development. It was amazing to be able to go to a rally about it and then wake up the next morning to read the news about the law having been passed!

The best days I spent in Argentina were not in Mendoza, but rather in a town I visited in the south for a few days called Bariloche. Located in Patagonia, it has mountains like Mendoza, but covered in snow and forests instead of cactus and other small thorny flora. In the valleys between them lies a system of seven lakes formed by the melting snow. I grew up in Michigan where water and trees are abundant, so it felt much more familiar than the desert that is Mendoza. I was giddy for the entire visit, especially when we first got into the national park just outside of the town and began hiking along a stream in a verdant forest. It was the first time in months that I had been surrounded by trees, and before that moment, I hadn’t realized how much I missed that kind of landscape. You don’t really know what you’re missing until you get a little taste of it. It was magical to spend a few days there, and hopefully that realisation will make returning to the US easier. While I’ve been in Mendoza, I haven’t thought about most of the things I miss in the US, but once I am back I will realize how different (both better and worse) life was without them.