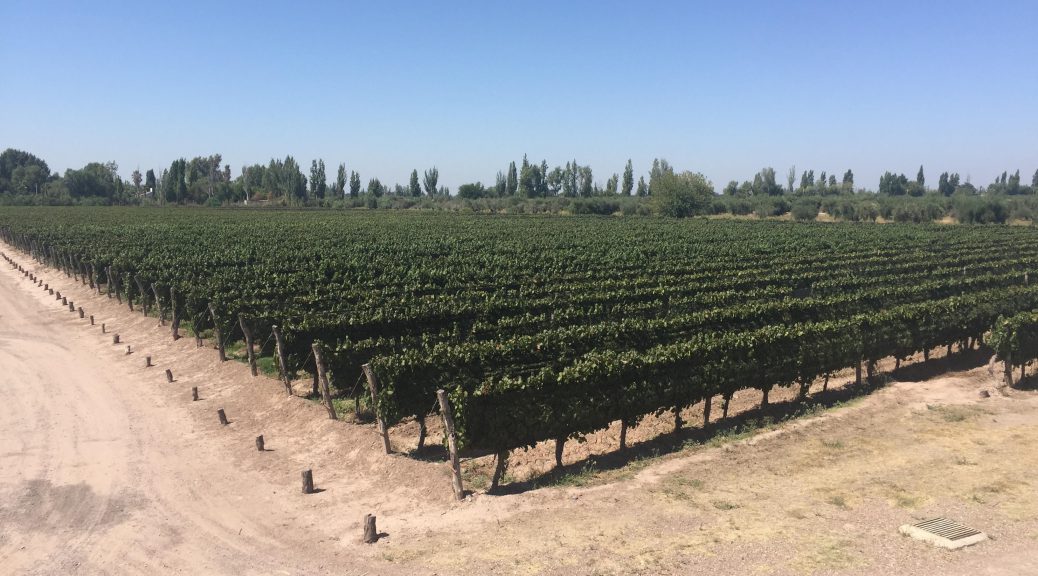 Greetings from Mendoza! I have now been here for more than two months and time is flying by. I have finally figured out the very different academic system, made friends, and become accustomed to everyday life here.

One thing that I have learned a lot about here is wine—I arrived in Argentina knowing next to nothing about it because I turned 21 after leaving the U.S. The Mendoza province is famous for the wine it produces, and the majority of grapes grown in Argentina are grown here. The climate is very dry, which produces grapes with strong flavors, but it is still necessary to devise irrigation systems for the vines. The region has a long history of engineering water—the indigenous people, the Huarpes, devised a system than brings water into the city originating from snow melt in the Andes and flowing down to the Mendoza river. The Huarpes’ system lives on today in the city in the trenches of water that line every street in the city called acequias. The streets are lined with huge trees that offer much-needed shade in the hot summers. The trees here are precious and could never survive without the acequias; it has only sprinkled two times in the two and a half months I have been here.

The first weekend I was in Mendoza, the beginning of the grape harvest was celebrated with the biggest festival of the year, the Vendimia. The celebration consists of several different events, beginning with the Blessing of the Fruit on the last Sunday of February. This is the only part of the Vendimia that happened before I arrived. Next is the Vía Blanca, a nighttime parade through the streets of the city. The focus of the parade is the 18 Reinas (queens), women selected to represent each of the Departments (similar to counties) of the province of Mendoza, who pass by on elaborate floats celebrating the character and harvests from their respective Departments.

The morning following the Vía Blanca, a second parade called the Carrusel takes place featuring the queens along with other cultural demonstrations. It began with a series of groups marching for causes, including a group asking for more support for schools, a group advocating for sustainable agricultural practices, and a group marching against mining and fracking. Following the demonstrators were several bands and groups of folkloric dancers. Next came formations of people riding horses and dressed in Gaucho style. Finally, the Queens came by offering fruit to people in the crowd. Many of them offer grapes, but there were also apples, pears, and even melons thrown (carefully!) into the waiting crowd. The final event in the Vendimia is the Acto Central, an enormous performance of live music and dance that tells the history of Mendoza and the evolution of the cultivation of grapes for wine in the region. It was the largest production I have every experienced—it reminded me of an opera, but on a much larger scale with hundreds of dancers on stage accompanied by folkloric music, projections, colorful lights, confetti, and fireworks.

April was the month of Malbec, the grape variety for which Mendoza is famous. Malbec wine is a dark, velvety red with a buttery texture and fruity notes. The variety thrives in Mendoza with the hot, dry weather and high altitude—the province is located in the west of Argentina bordering Chile at the foothills of the Andes Mountains. To celebrate Malbec, there were events almost every day around the city and in other areas of the province. One that I took part in was a tour of bodegas (wineries) in Lujan, just south and west of the city of Mendoza. We got to eat lunch with an incredible view of the mountains beyond the fields of grapes and olive trees. Later in the day, we toured another bodega that specialized in wines aged in enormous oak barrels.

I have also visited bodegas in Maipú, just southeast of the city of Mendoza, where we rented bikes for the day to explore the area, and I took a trip led by one of the directors of my program. We went to one of the most famous vineyards, Bodega Zuccardi. There we went on a tour where we got to see several steps of the process: the grapes are separated from the stems, juice is squeezed from them, and then it is fermented in enormous metal structures before being stored in wooden barrels.

I knew very little about wine before coming here, and it has been incredible to learn about it as part of my cultural immersion. I can’t imagine I’ll go to many wine tastings when I get back to the U.S., but here in Mendoza, they are ubiquitous and very accessible. You can take a bus out to the towns that surround city for around 50 cents each way, and once you reach a bodega, tastings and tours rarely cost more than five or ten dollars. Because wine is so ubiquitous here, it is very cheap—you can find decent wines for less than five dollars and excellent bottles for 25 or 30. It’s been very easy to get used to that, and going back to the U.S. at the end of my semester will be very difficult—I’ll just have to enjoy it here while I can!