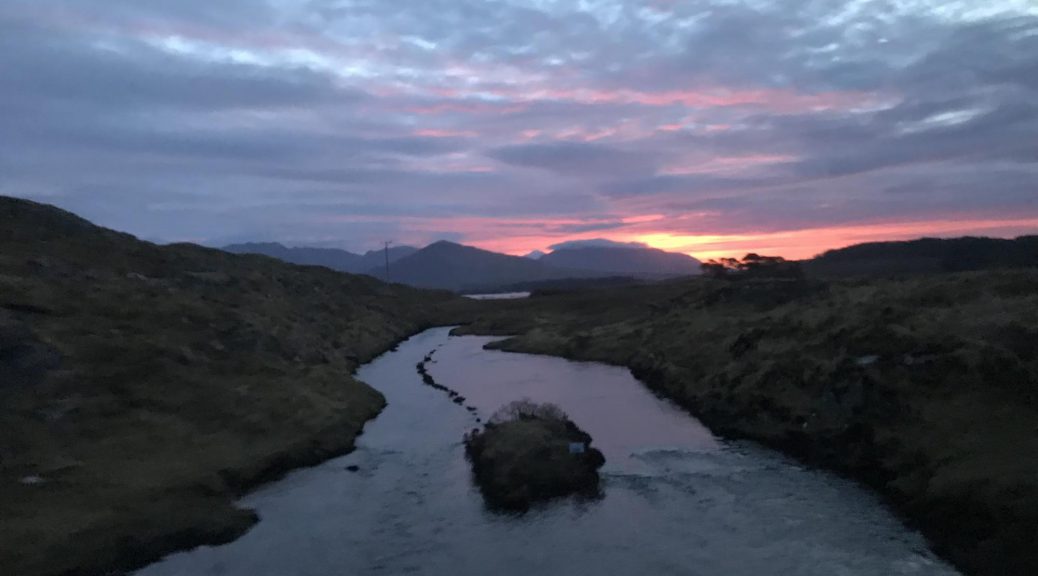 Featured image: The beautiful Connemara at dawn is something else – it’s Dawnemara.

As a friend named Jeff once said, a semester abroad is a paradox: it feels like two weeks, but also feels like a lifetime. It’s typically about the same length of time as a semester on campus, but the new settings and classes zoom by at double speed. It seems like it was only yesterday that I lethargically stumbled off of an overnight Aer Lingus flight into the great, misty unknown. At the same time, however, that feels like several decades ago. When I look back on nearly four months of living and studying in Ireland, it feels like a long-lived era of unfamiliar people, places, and things—some of which gradually became more familiar with time, and some that I will never understand (looking at you, pay-to-enter public restrooms). Am I a different person as a result of all of this, or am I the same old pre-Ireland Chris? Stay tuned to find out.

Much of what I got out of this semester came from the classroom teaching experience, which is the main component of Vassar’s Clifden program. From day one in Clifden Community School, I hit the ground running and began immersing myself in the day-to-day responsibilities of a schoolteacher. I met some very experienced, dedicated educators and school administrators and picked their brains during lunch breaks and field trip bus rides about how they teach, what they like about teaching, and their understandings of educational differences between the U.S. and Ireland. By creating lesson plans and leading classes regularly, I felt what it was like to be a real teacher while also maintaining the interesting status of a kind-of-teacher—somewhat of an observer from the outside. It was always obvious to the students that I was not a local and not a full-time, professional teacher who would be working in the school for years to come. I had a funny accent, I was learning the ropes from teachers between classes, and I looked younger than many of the students. In fact, if they didn’t have school uniforms, I definitely would have been confused for one of them in the initial weeks.

Despite my status as a newcomer, however, the students did not walk all over me like I was a bumbling substitute teacher. They granted me the same respect and attentiveness they would give to a veteran history teacher. Sometimes they were outwardly excited to find out that I would be taking the reins of the class on a particular day, even if it was a relatively dry lecture-based class rather than a fun review game. It turns out that high school students actually enjoy and value the time they spend in the classroom sometimes! Who knew? Over the course of a couple months in Clifden Community School, I saw myself gradually settle into the role of teacher after many years of being on the other end of the student-teacher relationship. This was a really important head-start. From what I have heard on both sides of the Atlantic, it seems like the first year of professional teaching is sometimes a chaotic trek that pushes fresh-faced, young idealists to the limits of human capacity, making them question every decision that led them to the front of a classroom. I won’t be able to avoid the inevitable obstacles and difficulties, but when I start teaching, I won’t be flying blind in uncharted territory, and this prior experience I have attained in another country will certainly be something to draw from for years to come.

During my seminars with one of the mentors in charge of the Clifden-Vassar program, I learned more than I expected to learn about the full scope of Ireland’s history. Stretching back into the early prehistoric millennia, the island nation has countless fascinating stories marked by interwoven folklore, art,  literature, politics, religion, colonialism, conflict, and coexistence. My travels throughout the country brought me to many sites where the history came to life, including St. Enda’s School, the Hill of Tara, and Leinster House (the Republic of Ireland’s Capitol Building), where I got to meet with one of the Ministers of State. I also made a trip to the Guinness factory, but that might be a bit more difficult to justify as a history lesson, considering the free samples that were involved.

One of my most unforgettable excursions was a recent visit to the cities of Belfast and Derry in Northern Ireland, the chunk of the island that is officially part of the United Kingdom and still fraught with deep, historical wounds. Conflict between pro-British Unionists and Irish Republican Nationalists violently consumed Irish society from the 1960s all the way through the early 90s. Scattered throughout the former warzones are solemn murals, memorials, and even a “Peace Wall,” still in use, that divides Catholic and Protestant neighborhoods from each other in Belfast. The wall stands as a testament to the distrust that still persists there in 2018, and perhaps a reminder of the disastrous consequences that can rear their ugly head if the antagonism festers into overt violence again.

Some of my travels during this semester were with a mentor or a group of friends, but much of my time was shared with just myself and my backpack. Like the semester as a whole, travelling alone is sometimes a quick and enjoyable journey, and sometimes it feels like forever—not necessarily an arduous long slog, but a rather hefty dose of alone time. Through all of the hiking, exploration, and independence, I wouldn’t say that I “found myself” or felt more at peace within my own mind; I think that discovering new places is usually a bit better when you share the experience with other people. With that being said, however, I did meet many interesting, yet temporary characters along the way, I saw a tiny piece of the world I had never seen, and I learned and experienced almost as much content as I would learn from a semester of more rigorous, non-stop academic work.

All in all, my semester in Ireland was different from the typical study abroad experience, sometimes challenging, but ultimately rewarding. There are a lot of things I will miss about living over here—everything from the traditional music and atmosphere of an Irish pub to the hilarious sight of an unconcerned sheep holding up traffic by casually meandering into the highway. There is only one thing that I won’t miss, and that’s my flight back to the United States. Or maybe I will miss it? We’ll see how I’m feeling when the time comes.