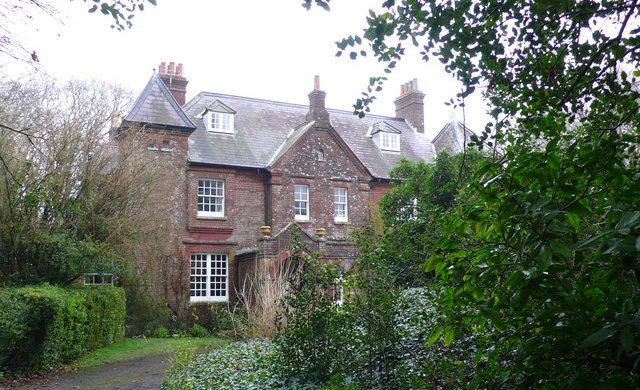 Featured image: Max Gate, the house Thomas Hardy built in Dorset and where wrote Tess of the Durbervilles and other works; Courtesy of Geograph.

Being an English major, it’s obvious I love reading novels. I’m also an overly curious person. This means that engaging with a story isn’t enough for me. I want to know about the person behind that story. I want to know what experiences and influences in their life brought them to write this particular tale. Yes, I know about “death of the author” and that a significant aspect of literature is how other people interpret a work, regardless of the author’s original intentions. I find that whole conversation extremely interesting too. But the book wouldn’t exist to argue over its meanings in the first place if the author didn’t have the life they did. This is why Wikipedia is my best friend—I’m constantly Wikipedia-ing authors, actors, musicians, trying to find out their personal story as I read or watch or listen to the one they publicly produced. And at the center of that investigation is place—where authors and artists grew up in, left, came back to, discovered. Place influences writing almost more than anything else.

This year has given me the opportunity to go beyond Wikipedia. It started with Thomas Hardy, whose novels I read in my English class last fall. Thomas Hardy was born in in the mid-1800s in the rural English county of Dorset, an hour from where I have been studying. While taking that class, three of my classmates and I drove together to the little cottage in the midst of woods and rolling hills where Hardy grew up and wrote his first novels, and then the bigger house with the large garden a few miles down the road that Hardy built as an established writer after he left London, feeling that the city was stamping out his creativity.

Hardy is often thought of in today’s society as a romantic, pastoral, sheep and sunshine kind of writer. It’s true that his books almost exclusively take place in southwest England’s farmland, “far from the madding crowd” (Hardy, 1874). Except that phrase, the title of one of his most well known works, is actually meant ironically. His point was that the countryside is a madding crowd all its own, filled with colorful, complicated people and riddled with brutality and tragedy. Hardy loved rural southwest England deeply, and used it as the setting for nearly all his novels. His books appear pastoral because of the absolutely beautiful descriptions of landscape he was able to write by observing his location. But he also saw the flaws in rural communities and exposed them. Wikipedia could have told me that Hardy set his stories where he grew up, but it meant something more to go there, see a glimpse of what he saw and the rooms he wrote in, to walk on the paths he did, and make the connection that even when he was wealthy enough to live anywhere, he came back home.

Southwest England is a pretty ignored place; farmland usually is. But Hardy did not ignore it. Rather, he intensely observed and questioned it. He made the world take notice too. I find it fitting that by reading his books, I was lured into this nowheres-ville I would never have even known existed. If the only thing books achieved was to make us explore places we would otherwise overlook, I think that would be enough.

Speaking of being lured to places, another experience I had of this was taking the train to St. Ives, a coastal community in Cornwall, England’s western tip. It was here that I found the lighthouse from To the Lighthouse by Virginia Woolf. Woolf lived in London but spent summers in St. Ives as a child. She wrote to a friend, “I could fill pages remembering one thing after another that made the summer at St. Ives the best beginning to a life conceivable” (qtd. in New York Times, 2018). Like Hardy, Woolf kept returning to this place of her childhood as an adult and used it as the basis for several novels. Having read To the Lighthouse in a Vassar class on Modernism, I was interested to see the place, but once there, the best part was the art museum, where the galleries were filled with the paintings of artists who came to St. Ives amidst the world wars and used the secluded seaside location to both escape and grapple with what they had experienced elsewhere. Sometimes authors and artists are inspired by the goings on in the places they are in, and sometimes they are inspired by going somewhere totally removed from the experiences they are working to express. Thanks to Virginia Woolf, St. Ives showed me that.

Virginia Woolf was a city kid who fell in love with a secluded place, which is the story of Beatrix Potter as well. Beatrix Potter is the author and illustrator of Peter Rabbit and dozens of other whimsical children’s tales. It’s hard to imagine these country animal stories being written by a woman who lived most of her life until she was in her mid-30s in the wealthiest area of London, but they are. I got to visit the little house Beatrix Potter bought in the lake district in northern England, in the center of a farming village. As I walked through it, I kept coming across her little books placed by the top of the stairs, the study window, the front room mantel. They were each left open to a page that looked strangely familiar. Looking closer , I could see that in the illustrations were the exact rug I was standing on, or the path I could see out the window, or the curve of the stair banister, just with an anthropomorphic mouse or rabbit or kitten occupying the space too.

Potter once wrote, “I’m not an artist, I’m a copier” for a reason (Hilltop House National Trust Guide, 2018). Every scene she drew came straight from what she saw. Walking through the village, I could recognize buildings and streets and trees that made it into her illustrations. Locals told me that Beatrix Potter’s neighbors loved it when their houses made it into her books, and squabbled over whose cat was really Tom Kitten. When I was there, the townspeople still proudly pointed out to me their own gardens or shops in the pages. The lake district and farm life meant everything to Beatrix Potter, and her children’s books were just one way she showed that. They were not just books for children  though, I came to realize through my visit. they were also for the farming community then and now, capturing and cherishing the places of their everyday lives in a way our city-centered society never would.

These are just three examples, but I think any former dwelling place of an artist or author can reveal something new about who they were and the motivations behind their writing. It definitely taught me. More than that, by exploring these locations and talking to the people who still live there, I now have a better understanding of the impact these authors’ and artists’ works have on the people who live in these places, and on how these places are understood by those who visit them now.