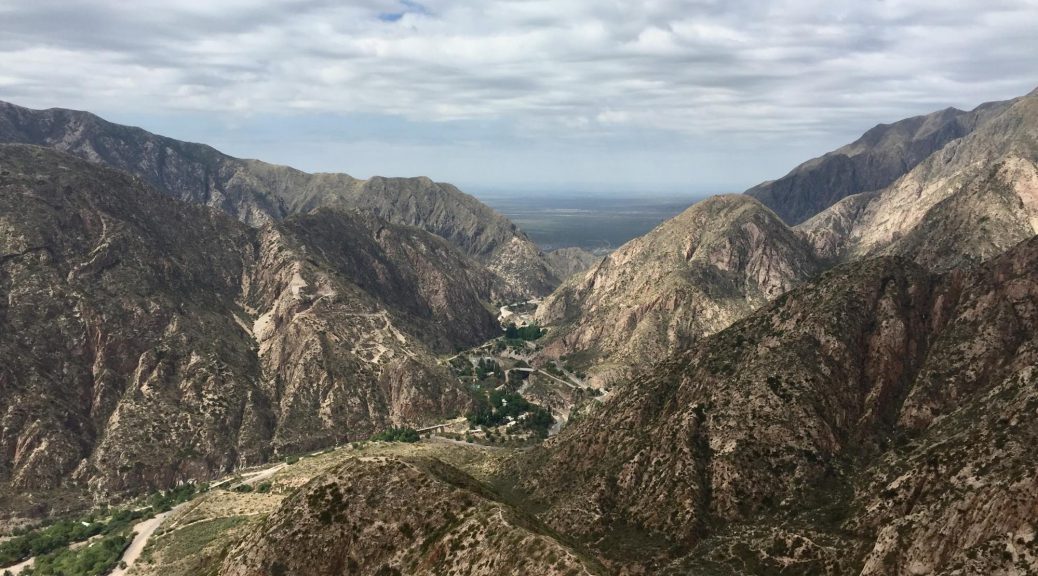 Featured image: The view from of a summit called “Feliz Cumpleaños” that I appropriately climbed the day before my birthday

I have now been in Mendoza for just over three weeks and I am loving it! In the U.S., I am a pretty high-strung person, but here in Argentina, I have become much more laid back. The way the day unfolds here is much more relaxed than in the U.S., or even in Buenos Aires. Whereas the capital is a huge metropolis, Mendoza is about a third of that size. This means that unlike in the capital city, the tradition of the siesta lives on because people can go home in the afternoon without much of a hassle. Most businesses in the city close from about noon until four for people to go home and rest, and then reopen from four to eight. One of the two universities where I have the chance to take classes also follows this schedule with a round of morning classes, an afternoon break, and another round of classes in the evening. Unfortunately, I’ll likely be taking all of my classes at the other university, but maybe I’ll be able to set my schedule up to have a siesta on my own!

Meal times here are also very different from what I am used to in the U.S., but it hasn’t been as difficult to adapt to the schedule as I was expecting. Breakfast happens at about the same time as in the U.S., though it has been difficult for me to figure out what I want to eat from the options that have been presented to me—everything here seems to have an incredible amount of sugar. My first morning in Mendoza, my host mom offered me sugary cereal, sweet yogurt, pastries, toast with jam, cookies, and of course dulce de leche, a kind of caramel that is ubiquitous in Argentina.

Lunch here typically occurs during the siesta—people go home, eat around 2 p.m., and then rest until it is time to return for the afternoon shift. The biggest change for me has been eating dinner around 10 p.m. every night. In some houses people eat a little earlier, especially if they have young kids. However, it is unusual to eat before 9 p.m., and depending on how my host mom’s and my schedules work out, we sometimes eat as late as 10:45 or 11!

Because dinner is so late, I always have to eat a snack in the afternoon or evening. For the first week it was hard to find good snacks—again, there are a lot of sweets to choose from but not many savory options—but recently I found some peanut butter, so I’ve been eating that with crackers or an apple, which is much more satisfying than the cookies I was eating the first week.

I was a bit nervous coming to Argentina having eaten vegetarian for most of my life—Argentina is known for eating lots of wonderful meat. The first few days were a bit tough in Buenos Aires when we were mostly eating at restaurants; I ate a regrettable amount of pasta. In Mendoza however, I am incredibly lucky to live with a chef! My host mom doesn’t eat a lot of bread or pasta, which works wonderfully for me. We often eat seafood, which is not too much of a change for me because I eat fish at least occasionally in the U.S. Another one of her favorite things to make is a tortilla, basically a quiche with whatever good stuff is in the fridge, plus mustard, cheese, and eggs. My favorite one we have had so far was made with olives, pickled red pepper, and mushrooms. I feel very lucky to live with her because she cooks incredible food and we eat lots of vegetables!

Argentina (and Mendoza especially) has a lot of wonderful food to offer even if you don’t eat meat. The city of Mendoza is the capital of the province of the same name, and the province is full of vineyards and farms that produce the most flavorful olive oil I have ever tried. Many other fruits and vegetables are grown here as well. Since we are in the southern hemisphere, it is currently fall, the season of the harvest. There are wonderful melons, grapes, apples, peaches, pears, and citrus fruits in abundance!

I have eaten some meat here; it seems a waste not to! The first weekend in Mendoza, we took a trip to a mountain town close to the city that used to be an important stop for the railroad line all the way from Buenos Aires, across Argentina, and into Chile. Unfortunately, the line is no longer maintained. It was an incredible experience—we climbed a mountain, went rafting in the Mendoza River, and took a trip on horseback through hills and plains to an old estate lined with olive trees. The trip was guided by a local family of gauchos—Argentinian cowboys—including a kid, who despite being only eight or nine, was already a master of blazing trails through the mountains on horseback. We had lunch at the farm, an asado (basically a big barbecue) cooked by the family. For those of us who don’t eat much meat, there were bell peppers stuffed with other vegetables, cheese, and egg cooked over the fire, but the focus of an asado is the incredible amount and variety of meat. I tried a couple kinds of sausage, but avoided the more adventurous options. Maybe I’ll be braver at the next asado I attend!

Being in Mendoza is changing me into a much calmer person, ready to go with the flow of whatever situation I encounter. Maybe it has something to do with the beautiful landscape, living at the foot of the mountains, maybe it’s the rich food and drink, maybe the siesta, or maybe just how welcoming people are here—all in all, the tranquil way of life in Mendoza has been a wonderful change of pace from living in the U.S. and I don’t know if I’ll ever be ready to come home.