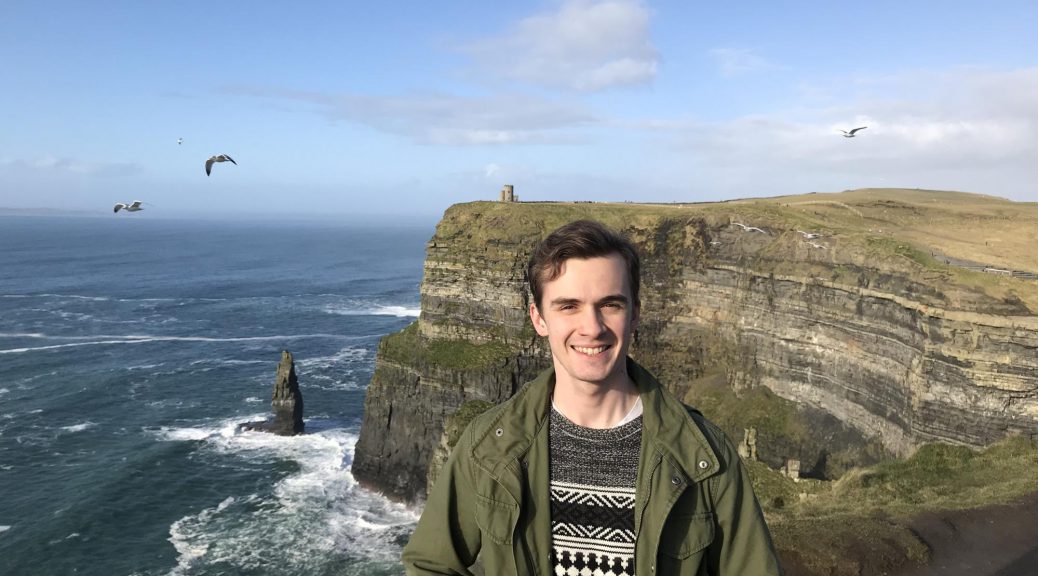 Featured image: Since 300 million BC, the Cliffs of Moher have produced over 500,000 Instagram caption puns centered around the word “more”

Happy Saint Patrick’s Day from Saint Patrick’s Land! When I was a young Irish-American lad, I used to imagine that Ireland’s celebration for its national holiday would be an event beyond comparison, an explosion of all the symbols and stereotypes and sights and sounds one might expect from being in the most Irish place on the most Irish day. In reality, however, the largest annual Saint Paddy’s Day parade in the world is in New York. This makes sense when you consider that there are more people of Irish descent in the United States than there are in Ireland itself. Also, for people living over here in a country where stuff is pretty Irish every other day of the year as well, the holiday does not carry the same novelty that you might sense in a place such as Boston. It’s like the McDonald’s Shamrock Shake. In America, this sickly green treat is only available for a limited time in March (so go out and grab one while you can, folks! $2.59!). But the hype surrounding the Shamrock Shake is not the same in Ireland, because Irish McDonald’s establishments actually sell them year-round.

Shamrock Shake aside, March 17th is nonetheless a huge event in Ireland and a national holiday in every sense of the word. Even small towns like Clifden host parades to celebrate their communities and organizations. After the parades, the entire country went to the pub to watch their national rugby team in an annual game against the English, which, for historical and cultural reasons, was obviously a very tense atmosphere. When Ireland secured the victory, a wave of uproarious celebration swept through the island. “It’s a good day to be Irish,” said one of the rugby commentators, and it was a good day to be a temporary, fake Irishman too.  For my third Far and Away post, I will celebrate Paddy’s Day by focusing on some of the distinctively Irish things I have seen and eaten—the things that make Ireland Irish.

First of all, there’s the landscape. One of the first things that comes to mind when I think of Ireland is rolling green hills with sheep munching away on them. I have seen a lot of that image in my time here, both on t-shirts in gift shops and when the real thing is right in front of me as I travel through Connemara. Ireland has been a heavily agricultural country with fertile soil for thousands of years, but its surface area is obviously not 100% pasture. There are many places where the rural swaths of green land give way to large urban centers like Dublin in the East, Cork in the South, and Galway (my favorite) in the West. One iconic highlight of Ireland’s landscape is the Cliffs of Moher. Adventurously stupid tourists like myself can walk right along the edge of these massive sea cliffs without a protective fence, so there’s nothing but good reflexes to stop a slip in the mud from turning into a fatal cannonball into the booming Atlantic waves below. It was a little bit intense to walk along the edge, but the awe-inspiring view at the Cliffs of Moher was worth it.

The cuisine of Ireland is not too bad, but there may be a reason why there are Irish bars everywhere in the world but very few Irish restaurants. A common meal known as the Traditional Irish Breakfast, as you can see from the picture below, is an interesting arrangement of bacon (“OK, standard breakfast food,” you might think), eggs (“sure”), beans (“hm, OK…”), a fried tomato (“whoa, what?”), and a pudding made from a mixture of oats and pork blood sausage (“stop right there, I need a minute to process this”). I ate all of this Irish breakfast with a head-first “when in Rome” mindset. Although some flavors were weird, the breakfast as a whole wasn’t too bad. But I strongly prefer Ireland’s traditional meals for other times of the day, which often revolve around more familiar friends like beef stew, bread, and potatoes.

One of the most definitively Irish things about Ireland is its most cherished language. Irish, also known as Gaelic, was the dominant language of Ireland for many centuries, until colonization by Great Britain imposed English as the language of industry and modernized society. Today, a very small portion of Ireland’s population speaks Irish as their native language, and a larger number of people are non-native speakers as a result of vigorous, ongoing efforts to promote and revive the language in schools and media. Almost every road sign, government document, pamphlet, and display has an Irish translation, often deliberately placed above the English words. It’s fascinating to see the Irish government and people holding up a second language that is in decline in the name of preserving national identity and history. In the United States, on the other hand, Spanish is a language that is becoming more prominent and yet there is often a sense of reluctance or indifference about putting Spanish translations on school information notices and other important forms of public communication. Although the situations of these two languages within their respective societies are so different, they barely warrant this kind of comparison.

The best part of any place is often the people, the weather, or both. In Ireland, where I have heard a weather reporter forecast “a brief spell of sunshine before we return to business as usual,” the onus is mostly on the people to be their country’s standout feature. Irish folks’ demeanor toward tourists and visiting students like me is much more welcoming than we often deserve. They’re always happy to chat with a stranger from that loud, dumb country on the other side of the pond, even in an era where that country appears louder and dumber than ever. I have only a month left before I return from my semester abroad, so on Saint Patrick’s Day I celebrated all of the good experiences behind me while looking forward to bringing everything I have learned into the future. Sláinte!