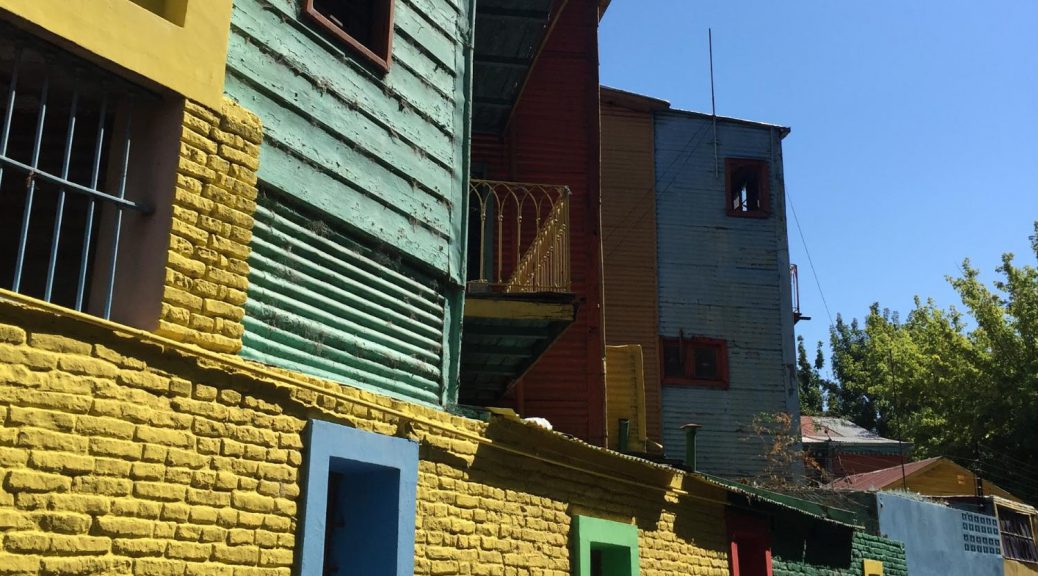 Featured image: Vibrantly colored houses on a street in the La Boca region of Buenos Aires—like the country of Argentina, Buenos Aires has various distinctive regions in different parts of the city.

Saludos desde Argentina! My name is Isabel and this semester I am studying abroad in Mendoza, Argentina, a city just east of the Andes mountains, close to the border with Chile. I chose Mendoza because the universities here will allow me to continue being involved with music while immersing myself in a Spanish-speaking country. It also helps that the landscape is picturesque, the climate is agreeable, and that the province where Mendoza is located produces incredible wines made from Malbec grapes.

Rather than flying directly to Mendoza, my program began in Buenos Aires, the capital of Argentina. It is a large port city with about three million residents located on the east side of the country where the climate is milder and more humid than Mendoza. Because it is right on the Atlantic Ocean, Buenos Aires is known for wonderful seafood. All seven of the students participating in my program met in Buenos Aires to begin our orientation. The first thing our program director discussed was that in order to improve the most, we would need to take advantage of everything our time here could provide us, immersing ourselves in Argentine life. The way he put it was that we needed to “sacar el jugo” (literally “squeeze the juice”) out of our time here. After our first session, we got our first taste of this by beginning to explore the city.

The first thing that surprised me about the city was the great abundance of plants, both big and small. Almost every apartment building in the city has balconies filled with cactuses and vines that cover the concrete with vibrant purples and greens. I was also surprised by the trees—some must have been hundreds of years old. There is a large tree in a plaza in the north region of the city that has small metal structures supporting branches the size of an average tree at Vassar. It made me feel more at home to be around such large plants and there were many sycamores in the city, though they were much smaller than the one on Vassar’s library lawn that tour guides say was once in the Book of World Records.

Navigating Buenos Aires was very different from traversing any city I have visited in the U.S.—the sidewalks are constructed from various types of tiles and there are frequently holes that are easy to trip on. Because the weather is so mild, there are many motorcycles that park on the sidewalk and weave in and out of cars. Speaking of cars, Argentinian drivers are very aggressive and adventurous—people ignore red lights and stop signs if they can get through the intersection without crashing into someone, and drivers weave in and out of lanes as if they don’t exist. The traffic lights in the city turn yellow not before turning red, but rather before turning green! You can be sure drivers will be stepping on the gas as soon as the light turns yellow. I rode in two taxis while I was in Buenos Aires, and both rides were thrilling. “Sacando el jugo,” indeed.

The three days we spent in the city were filled with visiting monuments, plazas, and historical sites. My favorite was the Recoleta Cemetery, named for the region of the city where it is located. Similar to cemeteries in New Orleans, all of the graves are mausoleums rather than stones marking places where people are buried. In New Orleans, this is for the risk of flooding, but in Buenos Aires, they simply demonstrate the wealth of the families entombed there. With all the separate buildings, it is almost like a city for the dead. Among the tombs was that of Domingo Sarmiento, an activist, author, and the seventh president of Argentina, as well as that of Evita Perón, former first lady of Argentina under the controversial presidency of Juan Perón, who many considered a dictator. Despite this, she was adored by many people and the door of her mausoleum is always covered in fresh flowers brought by people who come to see her resting place. The cemetery was strange but beautiful.

Just as I began to feel like I was getting oriented in the city, it was time to leave. Being in Buenos Aires was a great way to be introduced to Argentina, but I am looking forward to settling down in Mendoza with my host family and figuring out what classes and activities will fill my days this semester. I am excited to experience another distinctive region of Argentina and the food and drink that it is famous for. Catch me in Mendoza “sacando el jugo” both literally and figuratively!