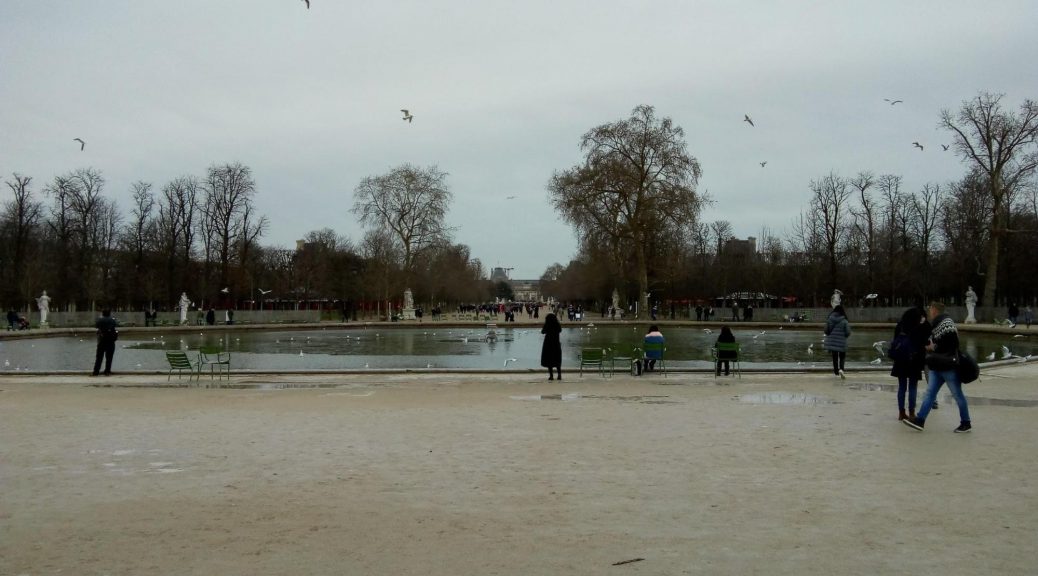 Featured image: Beautiful gray Paris days—here, in the jardin des Tuileries—have been slowly showing signs of the spring to come.

The notion of being abroad comes with a lot of expectations. What essentially describes a physical distance morphs into this romantic notion of difference, of monumental personal change, of an irreversible growth and expansion in understanding. Frankly, that’s a lot of pressure. I’m often reminded that I’m not that much farther away from Vassar here in Paris than I am from my hometown of Los Angeles when I’m at school, so I don’t really have an acute sense of the huge gulf I’m supposed to have crossed over. I know it’s there, but it’s been two months now in Paris and I’m feeling less and less overwhelmed by the contrast, by the distance in all its senses. (What’s more, confronting the East Coast/West Coast divide in the U.S. occasionally feels like more of a culture shock than it was coming to Europe.)

It’s hard, though, to grasp this gradual acclimation while you’re experiencing it. It certainly wasn’t hard to get used to abundant cheese, bread and wine, nor to sporting an aloof “metro face” to avoid—gasp!—emoting in public, a seeming Parisian no-no. But my first vacation from classes, a taste of the famed and beloved French tradition of les vacances, brought new sights and yet another instance of physical distance that allowed me to reflect on my time abroad thus far.

A short but exciting trip to Madrid and Lisbon was a welcome break from Parisian snow—apparently a rarity—and, probably for the first time in my life, 50 degrees felt warm. The plane trips to both cities, too, were breezily short. At least after the flight from the U.S. to France I could feel that we had crossed a border, let alone an ocean, but these were definitive hops, skips and jumps within the European proximity.

It was strange, though, to suddenly be doubly foreign in Spain and Portugal, as an American student traveling abroad from France. I got to practice my high school Spanish in Madrid (read: order tapas and say gracias, neither with much grace) but found that certain repetitive French pleasantries—merci, pardon— came much faster to my mind than they did in Spanish, and sometimes even faster than English. My extremely limited Portuguese got its turn as well, mostly notably when I asked for a table at a restaurant after which the hostess launched into a long response, leaving me bewildered but simultaneously entranced by the beautiful sounds. Getting a response in anything but English felt like a huge win, a mental game I was able to carry over from Paris.

I was also at a loss when museum cashiers asked where I was from, since I’m from the United States but coming from France, leaving me to panic and mutter “France” in what could only have been a very American accent. I was reminded, though, that in France I often don’t know whether to say I come from New York, since Vassar is the reason I’m here in the first place, or from Los Angeles, so the feeling was familiar.

After all, it was fun to finally be a tourist and know that that is what is expected of you, something I’ve tried to avoid in Paris, where in theory I’m supposed to be integrating and not just observing or visiting. (I think I blow my cover, though, every time I gape at the Eiffel Tower, visible during my walk to the metro from my internship.)

Stepping off the plane back in Paris was a relief in some ways—it wasn’t an entirely new reintegration, of course, but it also felt odd saying I was back home. I take it as a good sign, in any case, that the experiences that have stuck out to me most this past month are those that have taken place outside of Paris, meaning that Paris has become a sort of home base, a known quantity, however foreign still, in which I’m carving my place, little by little.

These swirling, elusive ideas of origin, identity, culture and self are definitely brought to the fore from time to time, mostly when I despondently question if fluency is actually attainable or secretly examine what parts of my personality or worldview might be decidedly American. But I’m glad I have the chance to wonder at these things, to view myself interacting within a foreign context and to see the inner foreign parts of myself.

So those grand expectations of studying abroad may not, as I suspected, come to fruition with movie-montage perfection. But smaller moments have, without fail, accumulated slowly and allowed for big reflections. As a wall blocking airport construction declared as I waited to board my plane to Madrid, Paris ne s’est pas construite en un jour—Paris wasn’t built in a day. And, I suppose, neither will my experience of it.