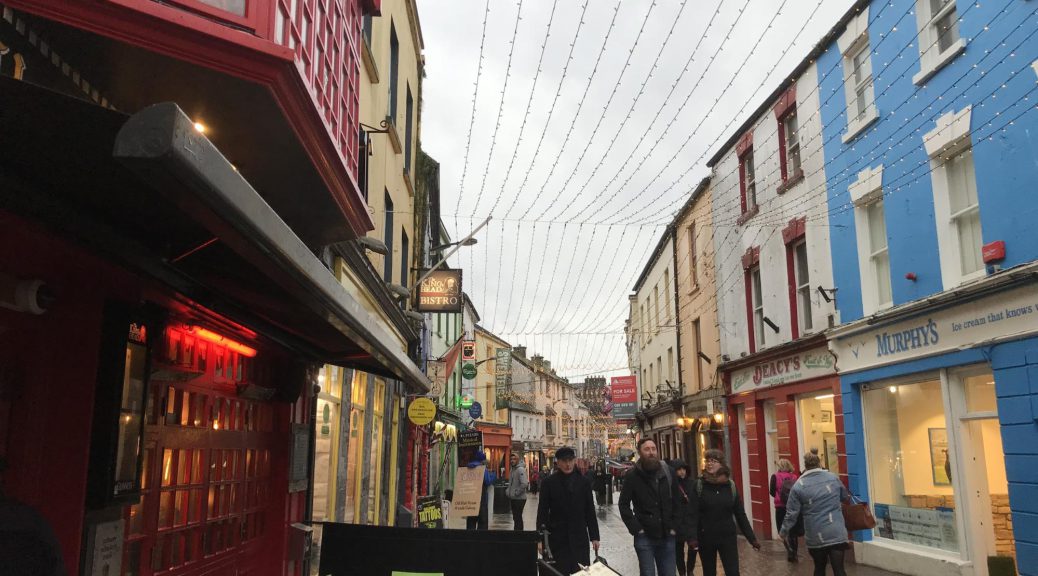 Day 47 in Ireland. I have seen every corner of this island, I am fluent in Gaelic, and the blood that courses through my veins is now a vibrant, emerald green. Maybe not all of that is entirely true… It’s actually day 48. After a month and a half of living in the Emerald Isle, I am thoroughly settled in and I have had a handful of interesting experiences. I got lost in the country roads outside Clifden and somehow ended up at a castle. I saw the actor who played King Joffrey from Game of Thrones at a pub in Dublin. I have strolled through cities, hiked up mountains, and fallen ill two times. This current bout of sickness feels much stronger than the common cold. It’s like some kind of influenza that managed to sneak through the defenses of the flu shot I received just before leaving America – maybe it’s the Bubonic Plague? I certainly hope not.

Last week I had what I might someday remember as a kind of life milestone: my first full class period of teaching. In the initial weeks of this JYA program I had done lots of work with students and short bursts of leading classes, but not until recently had I done a complete class of full-on teaching. The history teachers at Clifden Community School graciously took the risk of giving me the wheel for their American Revolution unit. They did this with past Vassar students who worked in the school as well because they thought it was valuable and interesting for students to hear their first lesson of American history from the perspective of an American person. Unlike in the U.S., where we often become familiar with George Washington before we know basic math, Irish students encounter the American War of Independence for the first time in Second Year of secondary school, the equivalent of eighth grade.

I led them on a crash course through the essentials: the Boston Tea Party, the Declaration of Independence, and Valley Forge. But as a student of Vassar’s History Department, I knew that the textbook basics would not be enough. I tried to sprinkle in some things that would get them thinking, maybe even get them to ask questions if I was lucky. Of course I was lucky! The students in that class made my job easier by being just as attentive and engaged as I could have hoped. I could see the mental gears turning as I briefly described Richard Montgomery, a lesser known figure of the Revolution. Born in Dublin, Montgomery became an important officer in the American Continental Army and an early representative of the significant relationship between Ireland and the United States.

As I mentioned in my first Far and Away post, the Vassar Clifden program also entails a weekly seminar at a university in Galway city. Galway and I have grown very close over the past several weeks, with weekly visits to NUIG often turning into a night or a weekend on the town. It has so much to see for a modestly sized city, so I hesitate to go as far as saying that I know it like the back of my hand at this point. I’ll say that I know Galway like my elbow. It’s a college town, a harbor city, and a bustling hub of Irish music and fun. Galway’s proximity to the region of Connemara and the Gaeltacht (the term referring to the regions throughout western Ireland where the Irish language is more common) gives the town a distinct character that sets it apart from the capital city of Dublin. As you meander along the cobblestones of Shop Street, you pass through another world of old two-story shops selling wool sweaters and Claddagh rings, until the sight of a very out-of-place McDonalds takes you out of that world. But then you’re pulled back in by buskers and fiddlers filling the air with traditional Irish folk music. It’s such a high concentration of Irishness that it almost has the synthetic vibe of a theme park, but the absence of leprechaun costumes reminds you that this is the real deal.

When I reflect on what I hope to get out of my semester in Ireland, I always find myself thinking about that cliché of the college student who studies abroad in Europe and returns to America with a sense of entitled enrichment, a feeling that the student is better than others for having experienced a different culture with all of its cosmopolitanism and cafes and scones. If you ever catch me talking even a little bit pretentiously about Irish art, culture, or history when I’m back at Vassar, I cordially invite you to kick me in both shins. But while I’m here in Ireland I will seize the opportunity to take in all of that stuff you can’t experience in America, while also devoting myself to the more practical, education career-building aspect of this program. I won’t be a through-and-through, green-blooded Irishman when I return to the States after four short months here, but maybe if all goes well I’ll be a more experienced educator who also happens to know a little bit about Ireland.