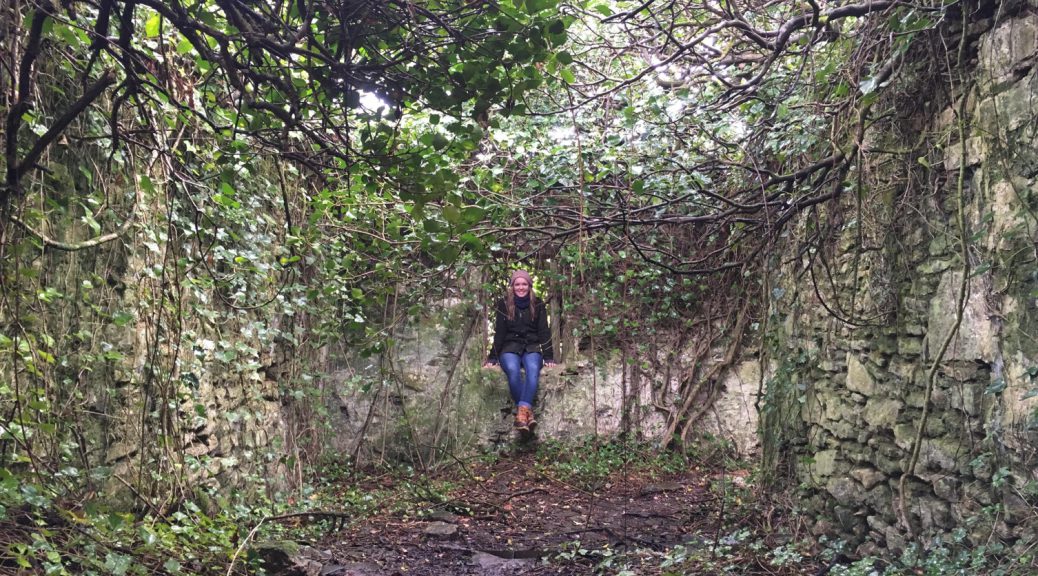 Featured Photo: Me in the ruins of an old house-like structure along the coast of Cornwall

I am a list-maker. I make lists for all sorts of things. Recently I’ve started a new one: things-Maria-should-probably-have-known-a-long-time-ago-but-didn’t-until-she-lived-in-the-UK-for-six-months. I kind of want to believe these gaps in my knowledge are an American thing but I have a sneaking suspicion they may be a me thing. At any rate, I can either teach you something new or just teach you the limits of my own knowledge.

Discovery #1: There are British dolphins

I do at least know one other person who didn’t know this either. Don’t know about you, but when I think about dolphins I think about Florida and the Bahamas—not the coast of England in February on the same day it snows. And yet that’s what happened. I was in Cornwall with my Australian friend walking along the coastal path when we came across the ruins of a very old stone house almost entirely hidden by overgrown plants. We left the path to explore it and rounding the back found a clearing in the brush where you could see out over the English Channel. A series of splashes caught our eye, and then there they were: at least six dolphins just below us, diving in and out of the water as they moved quickly along the coast. Despite the fact the snow had turned to rain by then, it was a very long time before we started moving again.

I was playing this game with my housemates and didn’t notice anything was amiss until I drew “wanking.” A few others I wasn’t expecting were “What kept Margaret Thatcher busy in her waning years,” “extremely tight trousers,” “David Cameron,” “The bloody Welsh” and “A sober Irishman who doesn’t care for potatoes.” I’m used to finding so many specifically American words, presidents, political terms and household names, but never really thought about them only being relevant to the U.S. The U.S. has saturated the Western world so much it’s way too easy for Americans to forget our points of reference aren’t everyone else’s, I think. I got quite the crash course in British pedophilic TV show hosts, kidnapping victims, political figures and slang terms that night.

Discovery #3: Penzance is not just a place in a musical

Heard of the Pirates of Penzance? It’s a real place. In Cornwall. I’ve been there. Apparently Gilbert and Sullivan set it there somewhat ironically, because Penzance was a very fashionable Victorian town in the 1800s with definitely no pirates, but allegedly pirates from the Barbary coast used to come by and terrorize people in the 1600s. At the very least there’s a 16th century pub still running in the center of Penzance called the Turk’s Head, and it feels like pirates would go there. It serves excellent vegetarian lasagna.

I volunteer at a primary school in Exeter, and this week I was working with the most serious seven-year-old I have ever met. Fifteen minutes into carefully crafting her toilet roll piggy bank she looks up at me and asks if I’m American. I say yes, she nods, and goes back to work. Ten minutes later she pauses in her taping of paper legs, frowns up at me again, and asks very seriously, “Do you think Trump’s an idiot?” I say yes and she gives me her first smile. “Good. Me too,” she says. Then she goes back to her piggy bank.

If American health and safety inspectors walked into The Bag of Nails in Bristol, England they’d burst an aneurysm. I thought dogs chilling at their owners’ feet in eating establishments was as good as it gets, but oh no. It gets better. In The Bag of Nails, a very small, cozy, old-in-a-good-way feeling pub, you’ll order your drink over a row of three or four perfectly content cats snoozing on the bar. Then if you’re me you’ll search the giant assortment of games behind the bartender’s head and proceed to spend the next two hours playing Scrabble with your friend in a pub while cats wind their way around your feet. The next time someone asks me what I like most about England, pub cats will be my answer.