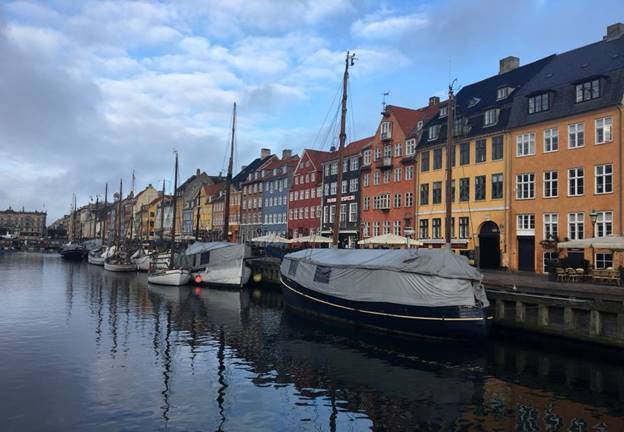 I didn’t really take time to consider that I was going to be studying in Scandinavia during the winter prior to departure. Sure, this is a “Spring Semester,” but that’s not realistic. Spring doesn’t really happen here. The Sun also doesn’t happen here. Okay, that one’s a lie; the Sun makes a brief appearance every day, but I’m rarely outside to see it. Though our days are getting longer, the sun rises while I’m in class (~8:30), and sets just as I’m getting out of class (~3:30). And even when the Sun is technically up, it’s often overcast.

Point is, Danmark (you read that right) is cold. Danmark might even give you a cold. Danmark may even generously give you the flu. Said flu may come on very quickly in the middle of the night during your first week of class. Danmark may also cause your asthma to pay a visit. And your nebulizer may not work because of the voltage differences in Danmark. And then you may lose your voice. And you might panic at 3 a.m. one night because you woke up and can’t breathe properly and knock on the door of a friend you made three days ago because the only other people you can contact that are awake at that hour are 6,000+km away. And Danmark may even send you to the emergency room within a week of you being there. But in spite of this, you’ll rally. Because 2018 is your year, and you’re thriving, and your best friend may force strongly suggest you blog for them and you have to survive this experience because you unwillingly promised them that you would write this. (Just kidding Jackson, love you.)

Let’s rewind. Hi, I’m Brendan (he/him), and I’m studying in København, Danmark, for this semester.  And despite Danmark’s best attempts in the contrary, I’m still here. And I actually love it, and now I’m blogging about it. So here we go:

I’m studying paleoclimatology and environmental science with a program called DIS. No one in this program is entirely sure what DIS stands for, but we’re rolling with it (some of use more smoothly than others). I live in the Sadolin Kollegium, which is southeast of downtown in Amagerbro.  A Kollegium is basically dormitory housing for students in København, since universities here often do not guarantee housing for students*. I can’t really put into words how great my Kollegium is. It’s small, has a badminton court as a common room, is located above a Netto (picture Walmart but smaller and less of a terrible company), and is 100m away from a bus stop and down the block from a metro station. Also, my Kollegium-mates (housemates? @the Duolingo Owl what’s the term for this?) are awesome, and are somehow still friends with me despite my rough first week here.

Our first week was apparently one of Danmark’s coldest this year. Normally, since Danmark is situated between the Baltic Sea and the Atlantic Ocean, winters are fairly mild, with temperatures hovering around freezing. Due to this, we often receive at least two (sometimes three) forms of precipitation a day. The weather usually isn’t bothersome, unless it’s very windy—which isn’t uncommon, given Danmark’s physical geography. So of course, during orientation when we had our “DIScovery tour” of København, it was incredibly cold and windy with a wind chill of approximately -15C. Long story short, my Kollegium-mates and I spent a lot of the day trying to find the nearest cafe, Netto, or bus route to huddle inside for warmth. København is a beautiful city rich in history and culture, but I would suggest experiencing it when there isn’t a threat that you’ll wind up with the flu days later.

I guess my introduction to Danmark has been very a little unconventional, but it does exemplify how I’ve learned most things about studying abroad: mishaps and embarrassment. First and foremost, Dansk is nothing like English. Luckily, one can get by with just English in almost all of Danmark—but that doesn’t make Dansk any easier. D’s are often pronounced like L’s, new letters (ø, å, and æ) exist and have multiple associated sounds, and word pronunciation seems to be a free-for-all. For instance, Copenhagen is not pronounced “Cope-en-hay-gen,” nor is it pronounced “Cope-en-häg-en” (like Häagen Dazs). No, København is pronounced “Coop-ven-houn.” I strongly suggest learning how to pronounce your street name immediately, so that when you and the friend you woke up at 3 a.m. are on the phone with Danish emergency services, they can send an ambulance immediately, rather than 20minutes later because you couldn’t pronounce your street (Lyneborrgade is pronounced “Loon-bor-gale” for any future asthmatic, panic-stricken, flu-infected Vassar students who live in Sadolin). Looking back, I guess we could have spelled it out and saved the time, but where’s the hygge (“who-guh”) and fun in that?

Hygge is a large aspect of Danish culture. Roughly translating to “comfort” in English, hygge is unique to Danish culture, and is very important to the maintenance of Danish identity and the continuation of the strong social-welfare state. Hygge can be found anywhere: in a local coffee shop, in a restaurant, or basically anywhere that fosters community among people and promotes quality of life. Hygge is fueled in part by the trusting nature of Danes. Coming from the hyper-individualistic culture of America, I couldn’t fathom why Danes would leave their bikes unlocked outside buildings or metro stations. (Slight tangent: biking as a means of transport is a BIG THING in København. Sometimes you can get away with walking in a bike lane in America—but no here. These bikes will mow you down.). I also couldn’t fathom how someone could just leave their stroller with a toddler outside on a sidewalk unsupervised. Luckily, when I first encountered this, an eight-year-old—who I was also worried about commuting to school on his own at 7:45 in the morning—was there to explain that the parent was probably inside the coffee shop next to us picking up a morning coffee. As I later found out from language and culture professor, Ditte Marie (Danish professors insist we refer to them by their first names), leaving toddlers outside and eight-year-olds commuting to school on busses on their own are common occurrences in Danmark. In fact, toddlers are sometimes left in strollers outside (in supervised, locked courtyards, fortunately) during the night to apparently boost their immune systems. Since we’re apparently incapable of a functioning healthcare system, maybe Americans should start doing that so their kids don’t wind up in the ER within a week of being in Scandinavia. Just food for thought.

Speaking of healthcare, the Danish system is far and beyond better than the system we have in the United States. Primarily, it’s free, and people don’t have to risk foreclosure, bankruptcy, or a lifetime of debt for necessary medical procedures. However, there are some important differences, as I quickly found out through first-hand experience. Number one: medical substances are much more controlled here. The strongest medicines one can legally get without a prescription are Panodil (Danish Tylenol) or Ibuprofen. Granted, you could probably find something stronger like Nyquil in Freetown Christiania, the self-autonomous, anarchist commune, but I’m not exactly keen on exploring the Danish prison system. Even though you may have the flu, the pharmacist at your local Apotek (Apothecary) will recommend vitamins, chamomile tea, and Panodil (which doesn’t do anything for the flu, by the way). As I found out, Nyquil is illegal here, so if you get the flu, expect to not sleep for several days. Secondly, when one calls an ambulance, it may not show up for 30 minutes, despite the hospital being 2km away. This may be due to you mispronouncing your address, but I can’t confirm or deny that. Regardless, even when the hospital’s EMTs show up, they may ask you to come outside to “have a chat,” even though you can barely speak. At the time, I was under the impression that we would “have a chat” en route to the hospital, but no, no, you may have to make a variety of aggressive hand gestures at yourself to describe your symptoms outside Netto at 3:30 a.m. to convince the EMTs you need to go to the hospital. (Retrospectively, they probably realized I was overreacting on the phone, because if I “couldn’t breathe,” I certainly wouldn’t be able to speak. Whoops.) Better yet, when the ambulance is about to leave, you may panic even more because you remember how disgustingly expensive ambulance rides are in the states, and are wondering if your health is worth that cost, or if you should call a cab. Luckily, the ambulance will be free in Danmark; however, you may leave your Danish EMTs speechless (pun intended) after explaining how expensive an ambulance is in the U.S.  Also, when your ambulance does get going, the EMTs may not stay in the back with you, despite you having breathing issues, and barely being able to get words out. You’ll manage.

Danish emergency rooms, specifically ones at 3:45 a.m., are interesting places. You’ll probably have the whole ER to yourself, which is good. However, the nurses and doctors may speak rapid fire Dansk in front of you, and you may wonder if they’re pondering how to tell you you’re dying and need to be admitted, or how to tell you you’re overreacting and that you just developed laryngitis, and aren’t having asthma complications (whoops). Don’t expect the doctor—who actually turned out to be Swedish and not Danish—to give out any stronger medication than the Apotek, either; he’ll suggest you get some Panodil and drink some tea. He also probably won’t appreciate you joking around, saying: “Well, if Freetown Christiania sells illegal medicinal plants, I’m sure I can find some Nyquil there, too.”

Overall, I would rate my experience with Danish healthcare as a net positive, and would definitely recommend the experience. In all seriousness, the Danish healthcare system is something to admire, even though Nyquil is illegal. It feeds into Danish emphases on quality of life, and supports everyone in Danish society, and not just those who can afford it. Sure, some things may come as a culture shock, and Dansk may take a lot of effort to learn, and I may still never get Nyquil here, but København is a dynamic and culturally rich city in a beautiful country, and I’m so grateful I get to engage with and experience it this semester.

*Important side note for people considering this program from Vassar: Vassar does not allow you to choose Residential Communities or Living & Learning Communities as housing options. No one will tell you this, but you’ll find this out on the housing application.