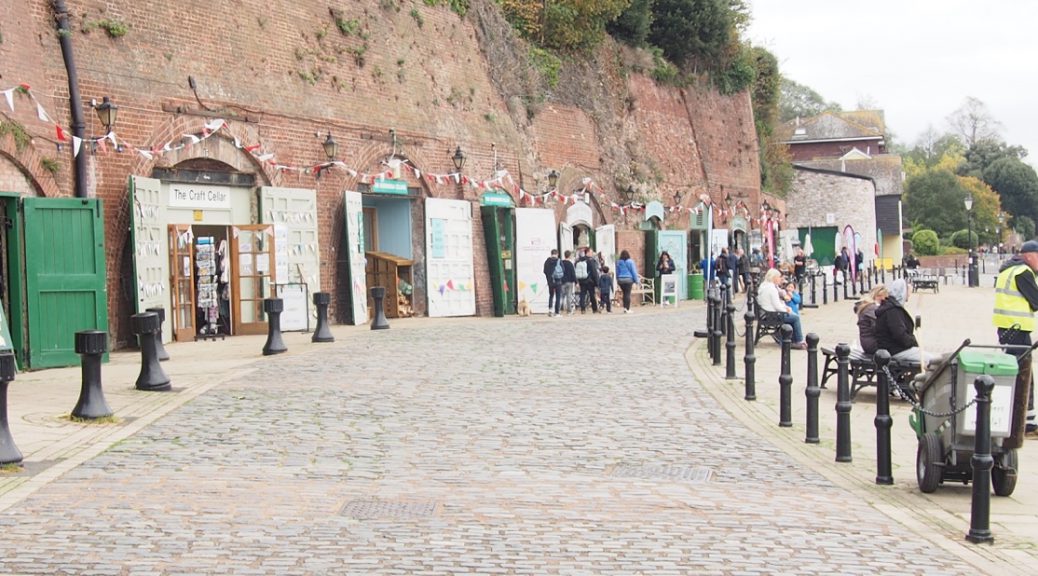 Featured Image: Looking towards The Coffee Cellar and other shops set into the bank by the river in Exeter.

So my fall semester at the University of Exeter has come to an end! Unlike for many other Vassar students studying abroad, my end of term didn’t come with a sense of finality. Rather it brought with it the feeling that I have slowly built a foundation for myself, a launching point for next term when I return to England. There is so much more of the country and the European continent I am impatient to explore in the next few months, but I am grateful to have a little nook of it that has become so familiar to me—a home base with places and people I love.

Curled up on my couch in my childhood house with my cat asleep in my lap, I’m feeling quite appreciative of the good that ordinary places can do for us. In the last months, I’ve town-hopped around southwest England, walked along the Thames in London, climbed Arthur’s Peak in Edinburgh and traversed Amsterdam on the back of a bicycle. All of these experiences and more like them have left me with incredible memories, but I would never have gotten through this semester without the handful of little spots within the town of Exeter I went back to day after day. They may not be grand and striking and historic, but they have become significant to me. In this post, I’m going to share just a bit about a few of them.

It would take both my hands at least to count how many times I’ve settled down in Artigiano’s between an elderly couple eating their classic English breakfasts and colleagues discussing business over coffee, then packed up my laptop and books while a trio of old girlfriends split a bottle of red wine to my left, and the waitresses light candles on each of the tables. Artigiano’s, with its hip glass front and cozy brick walls, nails it as both a café and a wine bar, although admittedly I’ve never bought anything but coffee and only ever go there with my laptop for company. But as someone who thrives on white noise and an energetic atmosphere when I’m burying myself in a story I’m writing, Artigiano’s is perfect. When I’m in need of a break, I look up and lose myself in the constant bustle of the place, a place that brings young and old, students and locals, those with work and those out to socialize, all together in one unique space like nowhere else can.

The Old Firehouse is hands down the most legendary and loved location among students at the University of Exeter. Literally an old firehouse but now a student pub, its three floors are constantly packed. Everything about it feels old in an unintentionally mystical, mysterious way, likely owing in part to the fact that it’s alleged to have been the inspiration for The Leaky Cauldron, since J.K. Rowling is a graduate of Exeter. Historically accurate or not, what matters is Exeter students believe in it, and the whole building hums with a proud, cheerful energy. My last night in Exeter before leaving for break, I went there for elderflower cider and one of Firehouse’s renowned pizzas. Some of my favorite nights with friends I’ve spent at one of the long wooden tables on Firehouse’s lantern-lit top floor.

It was on a day I was feeling low and restless, needing to work on a story but feeling utterly uncreative and uninspired, that I stumbled upon Exeter Phoenix. I walked up the steps and found myself standing in between two art galleries, while in front of me was a giant blackboard on which was written a list of that week’s workshops, speakers, musicians, group meetings, and details about an upcoming film festival all happening in that very building. Since then I’ve garnered ideas for stories by exploring art exhibits there with a fellow creative writing friend, attended a spoken word poetry group where I was joyously welcomed despite being the only person under fifty, and spent hours writing essays with friends in Phoenix’s wood-paneled café, celebrating finished assignments with a delicious dinner in the same place. Exeter Phoenix is the ultimate hub for Devon county’s most quirky, creative individuals, and a place where I’m constantly meeting people or discovering projects that challenge and inspire me.

First of all, all you really need to know to love Monkey Suit is its name. I always struggle to describe it, because “pub” doesn’t begin to do it justice. Monkey Suit probably puts it best, describing itself as “an independent venue in the heart of Exeter with a soulful array of cocktails, craft beers and comfy corners.” The place is spacious, warmly lit and cozy with big leather couches you sink into and never want to leave. It’s rarely loud or crowded, so perfect for deep, rambling, never-ending conversations over deliciously strange 2-for-1 cocktails like “P.S. I Love You” and this peanut butter chocolate one that really shouldn’t be good but is. Political rants, religious debates, arguments over American and British word choices and explanations of the workings of Brussels have all taken place here. Monkey Suit is a place I’ve entered with acquaintances multiple times and left four hours later with true friends.

I first discovered The Coffee Cellar with one of my closest friends from Vassar, Tyler. Alongside the river runs an ancient wall built into the bank, and dug into the wall are a series of holes that have been turned into shops. When I go on runs in the morning, I’ll look out across the river and see a line of shuttered round doors against the stone. One of these holes however, always has its doors flung open. What I found with Tyler is that it’s a coffee shop like no other. You walk in and you feel like you’re within a rabbit hole, with its stone walls arching over you and warm lamps giving the dark, narrow space light. The place has a sleepy, eclectic feel, too far and secluded for students to have taken over. It’s my hideout when I need to get away from everything, feel as if I could be a hobbit living in the Shire. When I finally choose to emerge, I’m greeted by the river glistening, swirling, at my feet.

For all of us who study abroad, we regale the exotic, grand places we finally get to experience in real life. But I think we would all agree that the famous places are not the only ones that matter, that make a real difference in our semester. Studying abroad also offers the chance to discover beloved little spots very few other people in this world will ever get to know, ordinary places that worm their way into our hearts even if just from the fact that for months we have spent our time in them, struggling over essays, debating with friends, sketching in our journals or just people watching, day after day.