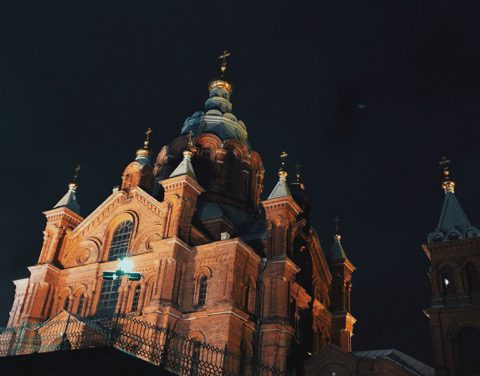 Featured Image: A view of the Russian Orthodox Church in Helsinki.

I hate being in-transit. Don’t get me wrong, I love seeing new places, I just dislike the in between part; the part where one gains or loses time, and isn’t home but hasn’t reached the final destination either. This feeling of liminality is further highlighted by how gross traveling makes me feel. Without fail, every time I enter an airport, I am some level of exhausted and slightly sweaty. And every time I get off an airplane, my face is oily with new breakouts, my breath stinks, and I’m even sweatier than before. Unfortunately then, it was in this state that last Wednesday I arrived at Helsinki-Vantaa Airport (after an hour-long flight from St. Petersburg, which had been delayed) and was told that I had missed my flight to JFK.

To be clear, I technically didn’t miss my flight. The airplane was still on the tarmac when I ran up to the gate. I could see the jet, but the gate was closed and I wasn’t allowed to board. I’ve never missed a flight before, let alone an international flight which was supposed to take me home after three months away. The feeling is not one I recommend, I shifted between irritation, exhaustion, and sadness. I just wanted to be home. But once I finished mourning the loss of Flight 0005 from Helsinki to JFK and accepted that I was going to get later than planned, things started to look up. The airline got me and the rest of my group (thank goodness I was traveling back to the US with two of my classmates and our professor) on a flight to New York for the next day, as well as hotel accommodations for the evening.

During my stay in St. Petersburg I had wanted to travel to the neighboring Nordic and Baltic countries but I was always too busy. But now, as my group was stuck in Helsinki for the day, I finally had the time to explore a city outside of Russia. And I don’t think we could’ve picked a better day to be in Helsinki, for December 6th, a day I was only meant to be in Finland for a few hours, is Finnish Independence Day. What’s more, this December 6th, marked the centennial of Finnish Independence! By the time we reached Senate Square, the main square of Helsinki, the sun had set (despite it only being about 4:30 PM), but the sidewalks were filled with people bathed in blue lights which were being projected from every building. The square itself was gleaming from string lights attached to the booths of the bustling Christmas market which occupied it. After quickly stopping to see the interior of Helsinki Cathedral, we made our way to the market, filled with patriotic Finns and an assortment of products available for purchase at the booths. In spite of the aggravation I had felt earlier in the day (and the bone-chilling cold of Helsinki), I think I will always remember the contentment I felt that evening, sitting on a bench in the market, wrapped in a blanket, drinking mulled wine, and watching the Finnish celebration unfold in front of me.

From then on the rest of my travels went smoothly. The next day I made my flight without a hitch, said flight landed at John F. Kennedy airport approximately nine hours later, and I was easily able to go through customs to find my dad waiting to pick me up. Now, back at home, I’ve spent the majority of my time (when not curled up in my bed) getting acclimated to life in the United States again and reflecting on my time in Russia.

I think one of the best decisions I’ve made in my young life thus far was deciding to study abroad in St. Petersburg. Even though being home once more still feels surreal, like I can’t possibly be away from my dear Petersburg, I do already miss it. As every city has its own unique characteristic features, there is really nothing like walking down Nevsky Prospect in the evening while the New Year’s decorations paint the bustling street in iridescent light. I know I shall have that image in my head for my whole life. Likewise, it seems impossible that places I frequented and cherished, The State Hermitage Museum and The Russian Museum, are thousands of miles away from me. As if friends I made on my trip, I miss The Winter Palace, I miss the paintings in each museum’s collection, and I definitely miss the iconic Hermitage cats. Of course, I also miss the actual Russian friends I made, my sweet Lisa, Matvey, Sasha, Egor, and Masha. Luckily, Masha will be the Russian Department Language Fellow next semester so we will be reunited soon. But as for the others, I can’t stop thinking about when I shall see them again. In part because of my Russian friends and in part because of a cultural, sociopolitical, and art history I have become enthralled by, I want to visit Russia again. And I know I will. Whether it be through an English teaching program in my post graduate years or simply as a tourist, I have my heart set on returning. In the meantime, I think this will act as a good motivator to continue teaching myself Russian; a language which I learned a very basic grasp of while abroad.

This picture I have painted of Russia is definitely through rose-colored glasses, however. The love I have for Russia, which has been shaped by my positive experience living there (as an American student), is not without serious critique. It’s hard to reconcile that a place which I called home for three months has a lot of political issues in need of examination; such as, the involvement of Russians in the American election, corruption within almost every facet of Russian society, the treatment of the LGBTQ+ community in Russia, the place of women in Russian society, and so on. Having returned to the United States and the hellscape that is our current political climate, I cannot help but compare the two and come to the realization that I know I am fortunate to live in the United States. Of course feeling fortunate to live in the US comes with the huge asterisk that I am fortunate to live in the US as a white, middle-class woman; and moreover, I feel fortunate to live here, while also feeling that the US has a long way to go in terms of racial, economic, gender, and religious equity. But at the very basic level, I feel lucky that in theory, all Americans are equal and all Americans have protections under the law which most Russians do not. For, even if right now these rights are for all Americans only in theory, there is a groundwork in place for Americans to fight for. On the other hand, Russian political activists have a lot of work to do.

After all this reflecting on Russia, it’s also been strange for me to consider what it will be like to return to Vassar in a few weeks. As I look forward to seeing everyone I haven’t seen for six months (or longer), I simultaneously wonder what my place will be. Thus far I have had zero contact with the freshman class (or President Bradley for that matter) and likewise I’ve had little contact with what’s been happening on campus. Furthermore, I can’t believe I’ll be halfway through my junior year. All these thoughts are overwhelming, but ultimately exciting, although I don’t have to fully think about them quite yet. In six weeks I’ll be back at Vassar, but for now, if you need me I’ll be firmly planted on my couch, taking a well deserved rest.