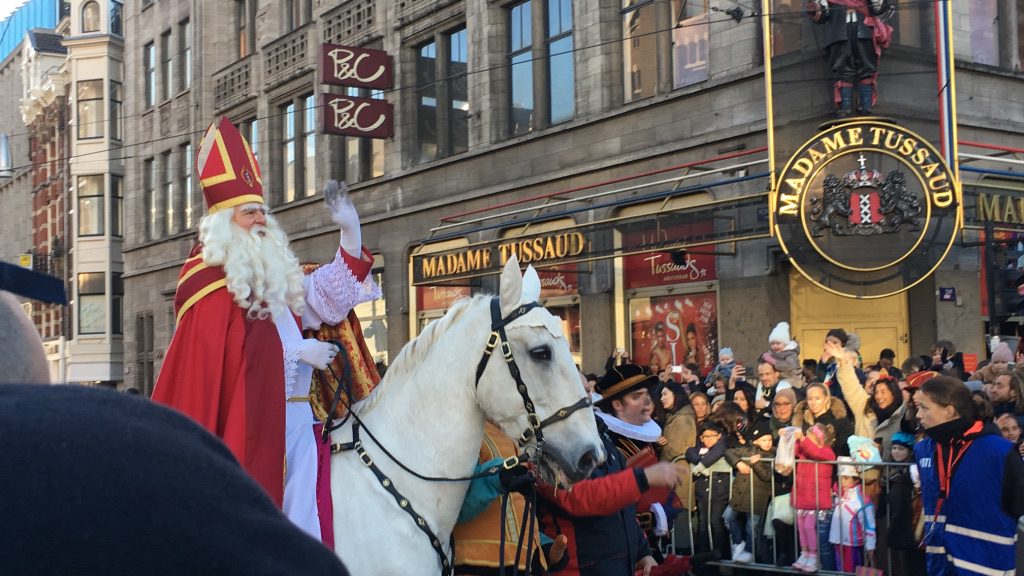 Featured Image: Sinterklaas has arrived by horse now in Amsterdam

As I am writing this, Americans have just celebrated Thanksgiving, a time to be thankful, eat disgustingly large amounts of food and spend time with loved ones on a break from school and work.  I, on the other hand, have had a midterm exam last Wednesday; had a final exam last Thursday, on Thanksgiving itself; have a research presentation due tomorrow; another presentation Thursday; and a 5,000-word paper, yet to be started, due on Friday.  So, as I’m sure you can imagine, stress is running a bit high at the moment—but it’s still unlike any stress I’ve ever experienced at Vassar; it’s a relaxed stress and that’s reassuring.

I’m realizing very quickly how little time I have in Amsterdam and Europe itself—and it’s very exciting, but also so sad. The fact that I’m just starting to fully understand the culture, the customs, and the climate only to remove myself from it in a matter of 40 days is just wild.  With American Thanksgiving having just happened and the Dutch holiday of Sinterklaas in the midst, there is still so much to share with my host family and international friends.  In this post I’d like to talk a bit about the exchange of culture that has happened in the past weeks and the exchange of culture still happening.

I. Sinterklaas has come to town—and he isn’t leaving until December 5th

Sinterklaas, to many Americans, is a similar figure to Santa Klaus, but in fact, they are very different.

So, while there are some apparent differences, the idea remains the same: be good and get good things in return, or be bad and get nothing.  However, there is major controversy surrounding Sint’s helper, Zwarte Piet.

His name is Zwarte Piet because of the soot that has accumulated on his face and body from going up and down all the chimneys every night.  But, as this tradition is acted out, many of the people who play Zwarte Piet have taken it too far and covered their entire being with full blackface and painted on red lips, a tradition that has been around for a hundred years. Let me tell you: it is a SHOCK to see children and adults alike dressed in full blackface.  While it has unfortunately happened and continues to happen in the United States, I don’t think there is a specific holiday where this is the norm.

So, while I was excited that I got to experience the arrival of Sinterklaas and the parade, there was hesitation in joining in on the fun. I hope as the years progress and Sinterklaas continues to keep coming back, that the racism associated with the tradition dies and everyone can join in on the fun.

II. American Thanksgiving is not the same unless in America

The good thing about being a part of a study abroad program for American students, however, is that they provide you with a Thanksgiving dinner of sorts!  The only stipulation was that if we came, we had to make some food.

Maria, a friend from Vassar, was here this weekend and together we made corn pudding (my grandmother’s recipe) and cranberry sauce (Maria’s family recipe).  However, there were some ingredients that we couldn’t find…  For me, I couldn’t find cream corn, a necessity for the dish.  Maria couldn’t find crushed pineapple.  But we made do.  I quickly searched for a cream corn recipe so that I could make the cream corn before making the corn pudding and Maria found pineapple rings and decided to hand crush them herself.

After about two hours of cooking (and a delicious turnout of our two dishes), it was time to take our homemade food and go to the city center where the dinner was being held.  Normally, as you are all well aware, I would ride my bike to the city center, but having two people and two dishes of food, I don’t think Gertrude would’ve been able to handle it, so we took the tram.  As soon as we got on the tram, some people gave us weird looks and started whispering to each other—it was quite the experience.  But, I did hear someone about two rows in front of us remind her friends that it was American Thanksgiving and that “it all made sense.”

Once at the dinner, everything felt so normal! I was surrounded by my friends I’ve made in Amsterdam, one of my best friends from back home, and even my host family! It was so unique to share this American holiday with about 80 American people with my host family who had never celebrated a Thanksgiving before.

For that, I am grateful.

While my time is ending quickly, I still have three and a half weeks left in Amsterdam until I begin a two-week journey traveling across Europe myself.  I’m so looking forward to spending my time here with those who I love in the city that has quickly become my third home.  Cheers to December, y’all!