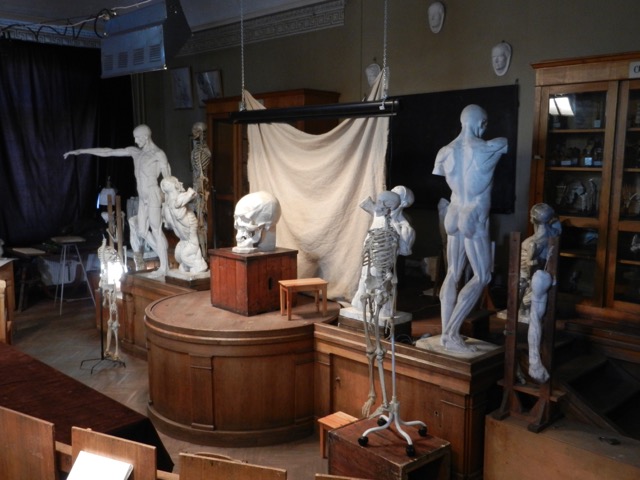 Featured image: An anatomy modeling classroom in St. Petersburg’s Russian Academy of Fine Arts, which was formerly known as the Imperial Academy of Fine Arts. There are some famous alumni of this institution such as Marc Chagall. The Academy is also incredibly (almost brutally) selective, with usually an acceptance rate that boasts about twenty applicants vying for a single seat. One of my instructors Yulia had to apply three times before being accepted while most others have to apply about five or six times before being accepted.

When my mom was in the third grade (around the year 1968), she had to do a project on a the Soviet Union. She put together a packet of information about a country not only thousands of miles away from her hometown in Indiana, but also a country which was extremely different culturally. My mom (and my dad) grew up in the United States at the height of the Cold War. Everything they learned about the Union of Soviet Socialist Republics was coated with extreme bias and nationalistic sentiment, even when they were just third graders. Because of this, my parents never thought they would visit Russia in their lives. And yet, last Saturday afternoon my parents and sister touched down at Pulkovo Airport on the outskirts of St. Petersburg, Russia.

The entire time I’ve been abroad, Russia has felt like it was my own. I talked to my parents about nearly every day, and they always wanted to know about my life in St. Petersburg; a life which I had cultivated without them. And now, my family was here, in my domain! So, in that sense, it is very weird to have my parents and my sister here. But, in another, I was so excited to share with them all I had learned and done during my time. In preparation for their visit, I kept in my mind a list of restaurants, museums, and monuments that I wanted to take them to, and maybe also show off to them my knowledge in the subject matter.

Our first stop on Sunday afternoon was to the Mariinsky Theatre. A very large component of my program has been reading Russian literature and then going to the opera or the ballet and seeing how composers transposed iconic Russian texts into music and dance. Since September, I have seen two operas, three ballets, and a musical (and I’m still going to see at least one more ballet), and thus I felt like seeing this type of performance with them, would be a way to share something of my personal experience with them, as well as something that is deeply entrenched in Russian culture. We ended up with glorious seats to a Stravinsky’s Petrouchka, a ballet about three puppets, set in St. Petersburg. In comparison to the other performances I have seen, this one was completely different. The Nutcracker and The Firebird (as well as the operas) were all traditional interpretations, all the singers and dancers were clad in period wear and fancy tutus, and the action definitively took place in the past. But in Petrouchka, the circus setting could’ve been anywhere in anytime and the dancing was balletic yet also interpretive. While it ended up not being the traditional theatre experience I wanted to give my family, Petrouchka has ended up being my favorite ballet; highlighted because my parents and sister were by my side.

After the ballet, we headed back to my parents’ hotel for a quick nap (they were still getting over the jetlag I hadn’t felt in months) and then walked to the famous Cathedral of the Saviour on Spilled Blood. This cathedral was built on the site of the assassination of Tsar Alexander II and it is by far my favorite church I’ve been in while in Russia (and let me tell you, I’ve been in a lot of churches in Russia). The building reaches high into the skyline of St. Petersburg, illuminating gold, blue, and green onion domes, classic to Russian architecture. Meanwhile, on the inside, the walls are covered from top to bottom in mosaics, depicting scenes from the Bible and Saints of the Orthodox Church. Going with my family was my third trip to Спас-на-Крови (the name of the church in Russian, pronounced “Spas-na-Kravi”) and so, for me, most of the fun was watching my family’s awestruck faces as we approached the cathedral and then entered it.

The next few days I had class to go to, and so my family was left to their own devices. It’s been such a treat to see them navigating places I’ve already been to, such as Peterhof, St. Isaac’s Cathedral, the Russian Museum, and so. I’m also very proud of them for being able to get around with a combined few words of Russian between them. During my first week or so in Russia, I remember feeling extremely overwhelmed at all the signs I couldn’t read and all the words I didn’t understand. And granted, there have been moments that I’ve acted as translator with what little knowledge of Russian I have, but for the most part, they’ve been able to be tourists and get to where they need to go without much of a problem.

Tomorrow, however, starts my first and only break of the program, Thanksgiving Break. On the one hand, the last two weeks I’ve been really feeling the exhaustion of non-stop learning catch up to me, so I’m excited to have time to rest and spend with my family. But on the other, it’s starting to hit me that in approximately two weeks, I will be leaving Russia and coming back to the US. Which on it’s own is overwhelming because I’ve had such an amazing time in Russia and I don’t want to leave behind some lovely Russian friends I just made. But even further, in this two week period, I have to write two art history papers, complete one project, and take a final exam. I keep telling myself that all these things will get done, and I suppose in a sense they have to be done in two weeks since I will be leaving the country, but that hasn’t quite alleviated the stress I feel about all this work, particularly while I’m also trying to figure out registration and housing for Vassar next semester. But I suppose those are all tales for another blog post 🙂