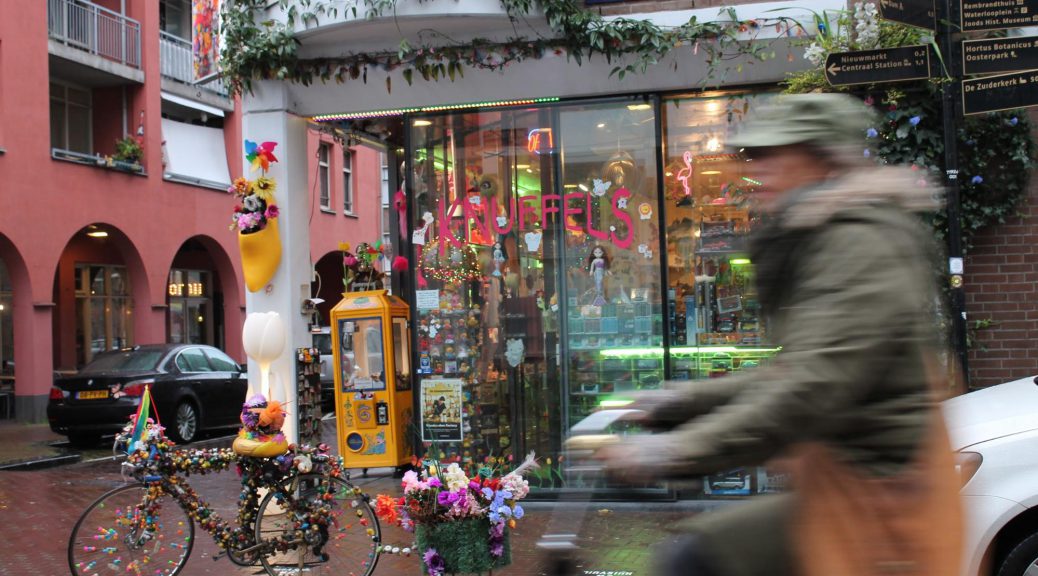 Featured Image: My friends and I spotted this toy store on a shopping street in Amsterdam’s city center and our inner children couldn’t resist taking a peek.

The smell of wet dog flooded the room as Miloslav entered, his brambly gray beard trembling above his plaid-clad potbelly. He parked his huge rolling suitcase in the corner and painstakingly tied the leash to a table leg. Immediately, the hound began leaping up on his lap, its enthusiasm belying the fact that it only had three legs. My two groupmates and I exchanged incredulous looks with our production manager before our prospective actor began chattering in Czech.

Once Miloslav was long gone, puppy in tow, our production manager shared that he had a reputation as “the richest hobo in Prague.” In the end, we chose not to cast our hairy friend. The other actor we saw that morning offered a far more realistic portrayal of Ondrej, the slovenly, gum-smacking husband-turned-murderer in the absurd comedy that we will shoot on 16-millimeter film stock at the beginning of December. Yet I won’t be forgetting Miloslav anytime soon, and neither will our production manager, who was so shaken up by his audition that she had to step outside for a smoke.

Since October break ended, my life has been consumed with preparations for the seven-minute film that will be the culmination of my semester. It’s gotten to the point where I can’t enjoy Netflixing in bed without imagining what the storyboards looked like for each episode of House of Cards, and can’t make my morning coffee without thinking about how best to render the final scene of our story, in which cunning Draha mixes up a cup of poisoned tea for her victim. Currently, having finalized our script and locked down our location—an Airbnb in Hostavice, a neighborhood in Prague’s outlying 14th district—we are in the seemingly endless process of casting. Since our three characters are all in their Medicare years, it’s no surprise that most of our potential actors speak no English, but the language barrier does make things a bit trickier. Apart from Miloslav, one of the highlights of casting for me was our session with Otakar, a fellow as jovial as he was spherical, whose headshot depicted him in a knight getup, delightedly brandishing a sword.

Given all the work yet to be done on our project, it’s a good thing that I’m now finished with independent travel for the semester. Last weekend, as a few friends and I waited for the bus to take us from the Amsterdam airport to the city center, we got to discussing which European city has stolen our heart and why. I was caught off guard by how clearly the answer stuck out to me. I’ve loved each of the seven new countries I’ve seen this semester in a different way: Budapest for its ubiquitous fairy lights strung across streets and twinkling outside restaurants, Copenhagen for its quirky basement cafés and the otherworldly hippie commune we visited, Stockholm for the Nordic coziness that conquers even October snow flurries and mid-afternoon sunsets. Yet every time I return to Prague, the feeling of homecoming is more intense, the relief greater when I hop on the tram and the chatter enveloping me once again follows the familiar cadence of Czech.

Nevertheless, as homecoming inches closer, I can’t help thinking about all the silly little things I miss about the States. Here are a few:

To be fair, the pluses of living in the heart of Central Europe outweigh its drawbacks. Here are a few things I’ll doubtless be pining for next semester:

As I write this, I’m snuggled in bed, or as snuggled as I can be given that my sheets and pillowcases are drying on the other side of the room. (Dryers are another thing I miss from the U.S., especially since all my jeans are now permanently stretched out.) Tomorrow I’ll dip a toe into holiday gift shopping, which will commence in earnest once Prague’s famous Christmas markets begin to dot the streets. Soon, Old Town Square will be filled with the spicy scent of svařené víno (mulled wine) and the plaintive bleating of donkeys, who will evidently be present along with a Bethlehem scene and a gigantic tree plucked from the woods of Central Bohemia. For now, it’s time for this weary traveler to sleep, with visions of Miloslav and his mongrel dancing in my head till morning.