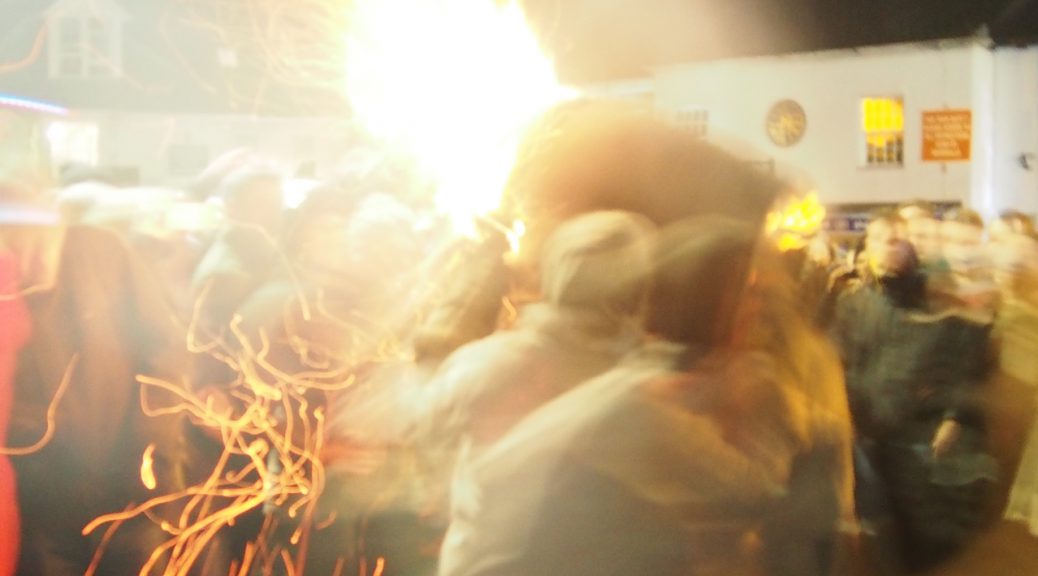 Featured Image: “Barrel Roller” hoisting the flaming tar barrel onto the next carrier’s back

There’s nothing quite like watching a large wooden barrel on fire charging straight at you. That’s what my JYA experience has taught me.

One of the perks of study abroad is being able to experience other countries’ holidays and celebrations. Studying in the UK, that means you get Guy Fawkes Day, also known as Bonfire Night. In 1605, catholic Guy Fawkes and his cohort attempted to blow up the protestant Parliament, but were discovered. My British friends explained to me that now every November 5th on the anniversary, cities and towns across the UK create big bonfires and set off fireworks to celebrate the failure of this plan. If I had been studying at any other university in the UK, watching a fireworks display would have been my Guy Fawkes Day. Yet instead, I’m at the University of Exeter, which happens to be 15 miles from the village of Ottery St Mary. Ottery St Mary is a cute, very old-feeling town with a population of under 5,000. It isn’t very different from the number of other villages surrounding Exeter, except for the fact that its townspeople run through the village with flaming tar barrels on their shoulders once a year.

The origins of the Flaming Tar Barrel Festival are something of a mystery. What is known is that it has been happening annually for hundreds of years and most likely started shortly after the gunpowder plot of 1605, although some argue that it began before that as a way to fumigate cottages or to signal the approach of the Spanish Armada. Up for debate. But back in the 1600s it was a common tradition in southwest England to roll flaming barrels down the streets on November 5th to celebrate the day. That tradition died out long ago in favor of safer celebration options pretty much everywhere except Ottery St Mary. But in Ottery, simply rolling barrels was always too tame. Ottery St Mary was and now continues to be the singular town in England to celebrate Guy Fawkes Day by carrying flaming barrels through the streets.

For the two weeks leading up to November 5th at the University of Exeter, you can’t go anywhere or scroll through anything on Facebook without hearing or seeing something about Ottery and tar barrels. I was told a thousand times that no way could I think of going anywhere on Saturday night but to this little village with the weird name I’d never heard of. So I showed up there after dark with a few friends who had also never been, and we followed the crowds to the town center. As we got closer the crowd swelled— the place was absolutely packed with people from miles around.

I stood on my tiptoes smashed between drunk British bros on a narrow cobblestone street squinting at a distant flicker. As I glumly predicted how boring this night was going to be, I heard a low communal yell and I found myself shoved forward by a crush of people throwing themselves every which way. “DUCK,” someone screamed. I felt a sudden heat and through a sheen of smoke stared straight into the center of a wooden barrel eaten away by white-hot flames. The barrel kept moving, and after a second I gathered my senses enough to watch the woman crouched beneath the barrel reach up and roll it off her back onto the back of another waiting woman, no more than a few years older than me, a hood pulled up to protect her hair and neck from the flames rising up from her shoulders. A moment later and the barrel was rushing towards me again, its flames licking the crowd that had to jump out of the way to carve a clear path.

That turned out to be just the beginning. Every half hour or so, another barrel would be lit and carried full speed through the crowded town center and up and down the packed side streets. You’d see the flames pause every now and then as the carrier shifted the barrel onto the back of the next waiting villager, sometimes successfully, sometimes not. There were a lot of dropped barrels, inducing a frantic frenzy of shouts and bodies attempting to hoist the barrel up again. One barrel’s run only ended once the flames had gotten to it so thoroughly that it disintegrated into ashes. Near me a person’s sleeve caught on fire. Every now and then I’d spot men wearing shirts marked “barrel marshal” escorting a singed carrier or bystander to a waiting ambulance.

That night I felt absolutely alive. The atmosphere of the crowd was indescribable—we were all terrified, overjoyed, excited, awed, frantic, and above all, united in the thrill of just being there—experiencing this ridiculously nonsensical yet age-old, treasured spectacle. It is insane to me, to every student at Exeter, that something like this still happens every single year with no regulations and little structure. The only significant rule is that the designated “Barrel Rollers” as they’re inaccurately called must have been born in the town of Ottery St Mary, and usually they are the latest in a long line of family members who have once been barrel rollers going back generations. There is one other rule for spectators. On Ottery’s website, the last line about the festival reads: “Although we welcome visitors, the object of the evening is to perpetuate a tradition, so if you attend it don’t try to change it, just stand back and enjoy one of the spectacles in our country’s history.”

So that was my Guy Fawkes Day, and first experience of a wholly British celebration. It taught me something about the utter power of tradition—if some people ran through Poughkeepsie, New York with flaming barrels on their shoulders they’d be considered certifiably insane. But in Ottery St Mary and the surrounding county of Devon, the annual festival is a typical November 5th. Traditions are not always good, and they certainly are not always safe, but I’ve learned that not entirely safe doesn’t automatically mean not incredibly special and arguably worthwhile. Traditions should be questioned, but they don’t always have to make sense. Ottery’s Tar Barrel Festival is full of a spirit of joy, excitement and community. And I wouldn’t have missed it for the world.