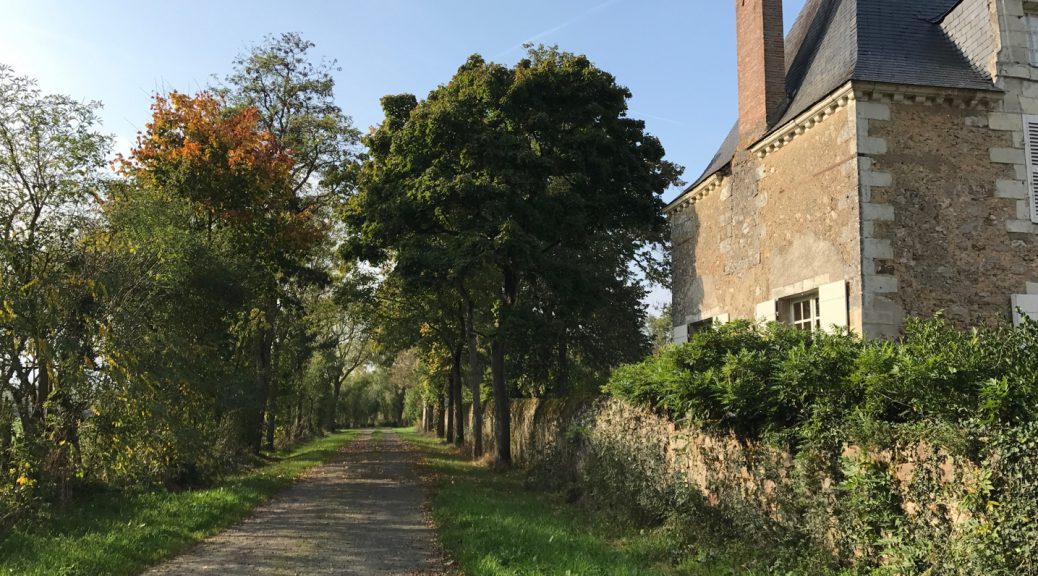 Featured Image: The Grandines Estate in Cheffes, France—my temporary home for the past weekend, as well as a site of local lore.

This weekend, I found myself locking eyes with a curly-haired cow, our breath crystallizing as one across the feebly-constructed barbed wire fence that separated us. Nose and ears burning bright red from the brisk wind of a new winter, I wrapped myself tighter in my layers of down and watched as she studied me passively, then flipped her tail and left to join her herd of soft-eyed companions. This pastoral reverie was far from the urban hubbub of Paris—300 kilometers, to be exact—and served as the backdrop for my three-day respite in the small village of Cheffes-sur-Sarthe.

Surrounded only by a vast sky and the blue shadows of far-off cottages, Cheffes is nestled deep in the Pays de la Loire and boasts a population of 971 habitants. Its main attractions include a sturdy twelfth-century church that has miraculously survived a number of floods of biblical proportions (photographic evidence of the most recent ones being proudly displayed on a nearby placard), as well as a sprawling country estate called Le Manoir des Grandines. The manor, curiously, is locally renowned for its fabled connection to Madame Henriette Caillaux, a wealthy former proprietor whose murder of a newspaper editor for libel dominated country-wide gossip in 1914.

The Grandines estate fell into the hands of a Parisian family a few generations ago, who now serve as the semester-long host family to my friend Shiv, and due to a series of very fortunate events and my unparalleled ability to worm my way into a weekend retreat at someone else’s rustic country house, I quickly found myself booking train tickets to this idyllic village by way of France’s high-speed rail (or the train à grande vitesse, quite literally the train of great speed—the country is very proud of its speedy intercity transportation). This was the first time I had left the periphery of Paris since my two-week stay in Bordeaux, and Cheffes was a far cry from either metropole.

While the vivacity and grandeur of Paris is intoxicating, it was refreshing to plunge into the rest of the country that exists quietly beyond the bustling city’s borders. Living in the country’s capital, it’s easy to fall prey to the kind of self-important belief that Paris is the nucleus around which the rest of France revolves. This isolation is further compounded by the rigid delineation between Paris and the rest of the country by the périphérique, a four-lane boulevard that encircles the city and divides what is Parisian from what is not. My host family themselves have explained the generally patronizing stereotypes that Parisians tend to ascribe to those living in the rest of the country, most of which are directed at their slower pace of life—the rural habit of taking two-hour lunch breaks during the workday delights me, but city-dwellers seem to be slightly less charmed by this easygoing lifestyle.

Fortunately for me, I have no allegiance whatsoever to the metropolitan lifestyle and was more than elated to enter into a world that was practically identical to Belle’s small village from Beauty and the Beast. In terms of similarities, the boulangerie was the social hub of the town, and at any given moment a villager might fling wide the shutters on their cottage (without bursting into song, unfortunately). Having temporarily escaped the elbow-throwing of Parisian public transportation, my 20-minute stroll from one end of the village crossed paths with five people at most. It was a nearly eerie contrast to the perpetual company that one has in the city, but a break from constant motion and noise wasn’t unwelcome, especially having grown up in a town that more closely resembles Cheffes than it does Paris.

Living in the village was a dreamlike antithesis to the equally entrancing ruckus of the city, and I was as reluctant to leave it behind as I was hesitant to temporarily part from my home in Paris. The boundaries between Paris and the rest of France have slightly disintegrated since, and it’s left me wondering if perhaps there isn’t a balance to be struck between the two worlds—who wouldn’t object to a few more moments of tranquility amongst the chaos of everyday life?