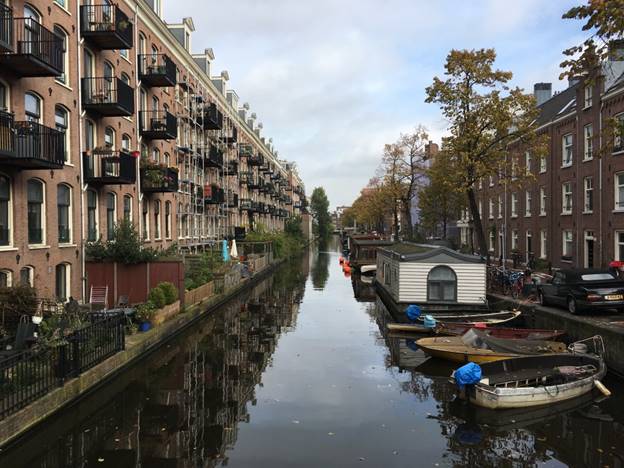 Featured Image: A canal that lines the Jordaan area, along with residential house boats where various families live

Two months down.  Two and a half months to go.

I’m currently writing this on my “fall break”, while sitting on a train, heading from London to Exeter, where my friend, Maria, is studying for the year.  And I cannot believe where the time has gone.  Again, as with any post, here are the updates from last time:

But, while things are going as they should be—just as I experienced at Vassar my freshman year—I’m in a bit of an October slump.  I’ve made my friends, solidified a routine, and do about the same thing every week.  Luckily, I recognized this trend fairly quickly and have been doing things that *spice* up my life in Amsterdam so that by the end of my time here, my life doesn’t all blend together.

I. I finally allowed myself to be a tourist

From the 8th to the 15th of October, Erin and Taylor, two of my best friends from Vassar, visited me in Amsterdam while they were on their version of fall break.  In fact, I even remember booking the plane tickets last April almost immediately when the notion that they might want to see me in Amsterdam over fall break came up in casual conversation.  But, I am so glad they made the voyage overseas to visit.

While I was having a great time in Amsterdam on my own, the fact that I could now bike for three minutes around the corner to the hostel where Erin and Taylor were staying and lay my eyes on not one, but two people that have known me longer than two months was one of the best feelings in the world.  The first time I saw them, I jumped off Gertrude, not even bothering to lock her to the rail, grabbed both Erin and Taylor, and hugged them the hardest I’ve hugged anyone since being in Europe.  I definitely missed hugs.

We made our way to dinner and cocktails that first night and talked about Vassar, about tap dancing, about everything I knew that no one else in Amsterdam could relate to, except for Taylor and Erin.  We talked about the new deece (the cafeteria for you folks not from Vassar), we talked about On Tap, the tap dancing organization we are all a part of at Vassar, along with so much more.

After parting ways that night and planning the rest of the week, I realized that I was finally going to get to see Amsterdam through the eyes of a tourist.  I took them to the I AMsterdam sign, we took a canal cruise, and we got many, many stroopwafels.  As time does, it flew by and the week was over before we could blink.  But, it was so good to see them and finally do the touristy stuff (and have someone to take my picture for me, instead of try and take an awkward selfie) I’ve wanted to do since my arrival.

II. I went to the Dutch National Ballet

On 19 October, I went to the Dutch National Ballet to see the life of Mata Hari, a Dutch-born ballerina turned spy who fell in love with a Russian solider while living in France during World War I.  Her life was so remarkable that I was very interested to see how it would be memorialized as a ballet (especially because the only ballet that I’ve seen is The Nutcracker…).  In all honesty, it took my breath away.

I did some research beforehand (and by research, I mean I read the entire Wikipedia page of her life a few hours before biking to the theatre) so that when watching the ballet, I would have some sense of an idea of what was going on… but the research I did, did not even touch on how emotionally high and low her life was.  The ballet had me in tears multiple times and by the very end, my heart was in pieces.  The artistry, the costuming, the ability of these dancers… it was all incredible.

I definitely plan to go back to the ballet soon; stay tuned for updates!

III. I went to one of the largest music festivals in Europe

Every October, Amsterdam hosts the “Amsterdam Dance Event” which is a week-long event where DJs come and play their craft.  The event culminates in the Amsterdam Music Festival at the Amsterdam ArenA.  Last Saturday, Natalie and I attended.

We walked up to entrance H, where at least 250 other people were also standing in line, just as eager to get in as we were.  We waited there for about 20 minutes before making it to the entrance, scanning our ticket, and being patted down by an older man looking for contraband.  Once through, we rode one of the tallest escalators I’ve ever been on, made a few sharp turns, and were finally in the football arena where the music was blasting and the lights were blaring.

This being my first music festival, I had no idea what to expect, but was eager to find out.  Natalie and I made our way to the covered field, right in the middle of the stage where we would stay most of our time during the night.  We heard the DJ stylings of Marshmello, Armin Van Buuren, David Guetta, Dimitri Vegas & Like Mike, Yellow Claw, and Vini Vici.  And again, before we knew it, the night was over and we were headed back home, back to another normal Sunday to follow.

But, the best part of the night was befriending a group of three Germans who were dancing behind us all night.  It was during a set where someone in front of us pushed me back into the three of them that made us such become such good friends.  From that accidental bumping, we became tight, self-identifying as “The Team.”

It is going to be my mission to do something new and exciting every week that I am in Amsterdam for the rest of my short time here.  Like I said earlier, I’m currently visiting Maria in England, and hope to have a few other trips planned in the not-so-distant future.  I also plan to live life and turn my phone off so that I can enjoy being in the moment in the present space that I am occupying.  I don’t want to waste my last few months here.

Until next time and Happy Halloween.