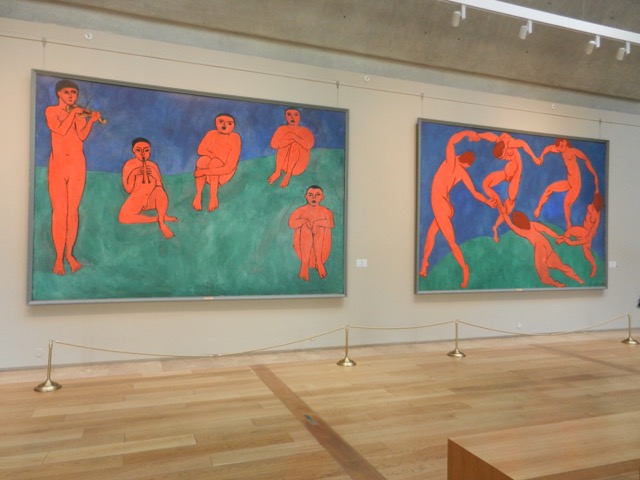 Featured Image: Henri Matisse’s famous paintings Music and Dance, currently on display in The Hermitage Museum. The version of Dance which is on display in New York’s MoMa was a study for the painting in St. Petersburg.

Some Russian rat bastard stole my phone. In the past I have been to many big cities in the United States and Europe, and I always prided myself on never having been pickpocketed. About two weeks ago, that streak came to a tragic end. Allow me to illustrate: After a long day of classes and a good workout at the gym, I was just trying to get home; part of my everyday routine. I boarded the 10 Bus at Nevsky Prospect (a picturesque stop located right in front of Kazan Cathedral) and in approximately 15 minutes I was going get off at Vossitanya Square, located near my apartment. The bus was packed so I was confined to standing near the doors, pushed up against numerous other people. Holding onto a bar with one hand and giving my bus card to the conductor with the other, I suspect this is the moment when the perpetrator reached into my jean jacket pocket and snatched my phone. For, a mere few seconds later, I placed my hand back into my pocket and immediately noticed its absence. I checked my other coat and pants pockets for it, but alas, it was nowhere to be found. At this moment in time we were in between stops and thus whomever had taken my phone was still on the bus, being a sly devil. Looking around to see if I could tell who had taken it, I glared at anyone that made eye contact with me. Soon we arrived at the next bus stop and the doors opened–in this moment I knew that my phone was gone forever.

In spite of how annoying this is, I still count myself as being fairly fortunate. My phone’s contents are backed up on my computer so I really only lost the carcass of an iPhone 6; it would’ve been much worse and more complicated had my wallet (containing my debit card, credit cards, and Driver’s License) or passport been stolen. Moreover, being pickpocketed takes any confrontation out of the picture. While I might want to know who took my phone for the purposes of telling the perp that they are very rude, it’s probably better that I will never know who they are. While they stole something from me, I was never in harm’s way. I assume now that my two-year old, kinda dirty, sometimes-malfunctioning phone is either being sold on the electronics black market, or already has been sold. Meanwhile, I’ll have a new iPhone as soon as my parents visit Russia in late November. (My parents bought me a new phone in the US so it would be easier to put it on our family plan, only to discover that it is in fact illegal to ship cellphones into the Russian Federation. You learn something new everyday!) But as of right now, I have been using an old cellphone my TA gave me. It reminds me distinctly of being in middle school–it’s a chunky cellphone, from before even the slide-out keyboard era; whenever I try to text, I have to type out each letter of a word individually, like a peasant. It takes an exceedingly long time, but yes, my phone does have games.

I anticipate that this next phrase may sound pretentious as all hell, but I do actually feel very liberated without a smartphone. My time spent on social media is relegated to mornings (before class) and the evenings, when I’m near my computer. And while I still have been active on social media, it’s kind of nice to be disconnected during the main part of my day. In a weird way, I feel like I’m seeing St. Petersburg in a different light and absorbing more from the excursions I go on. Instead of being hunched over my phone on the bus, my only form of entertainment is spent staring out the window, seeing sights of the city I may have missed. Or if on a tour I get a bit bored, I can’t check notifications on my phone, so I’m forced to refocus my attention and find something interesting in what the guide is saying. (I also have to say that I think I look really badass working out on the elliptical machine at the gym whilst reading Dostoevsky or Pushkin.) To be clear, I’m definitely not demonizing the use of technology. I always find myself irritated when I hear older people reflect the sentiment something similar to, “Ugh, kids these days are always glued to their phones!” I think this a very reductionist attitude, oversimplifying young people as well as some of the goods of modern technology. All I’m saying is that while at certain parts of the past two weeks it’s been irritating to not have my normal phone, it’s also been a refreshing experience.

Since I’ve been pickpocketed, naturally I’ve become a bit more cautious when I’m out and about. Now that I’ve transitioned to my winter coat (Yes, winter. It’s starting to get cold in Russia.), I always keep my pockets zippered shut and am more aware of my surroundings. Certainly though, I have not allowed this one event to prevent me from doing things I want to do. Instead, in the last few weeks, I’ve visited the cradle of the modern Russian state, the city of Novgorod, the seat of the modern Russian state, the city of Moscow, and saw my first opera, a lovely interpretation of Evgeni Onegin. While annoying and violating that someone reached into my person and took something that belonged to me, I’ve decided to not allow it to affect my overall study abroad experience. Instead of hiding in my apartment, too afraid of being pickpocketed to go outside, I’m still going to go out to try caviar (which I’ve realized that I despise, actually) or visit the Hermitage on the 100th anniversary of the October Revolution; pickpockets be damned!