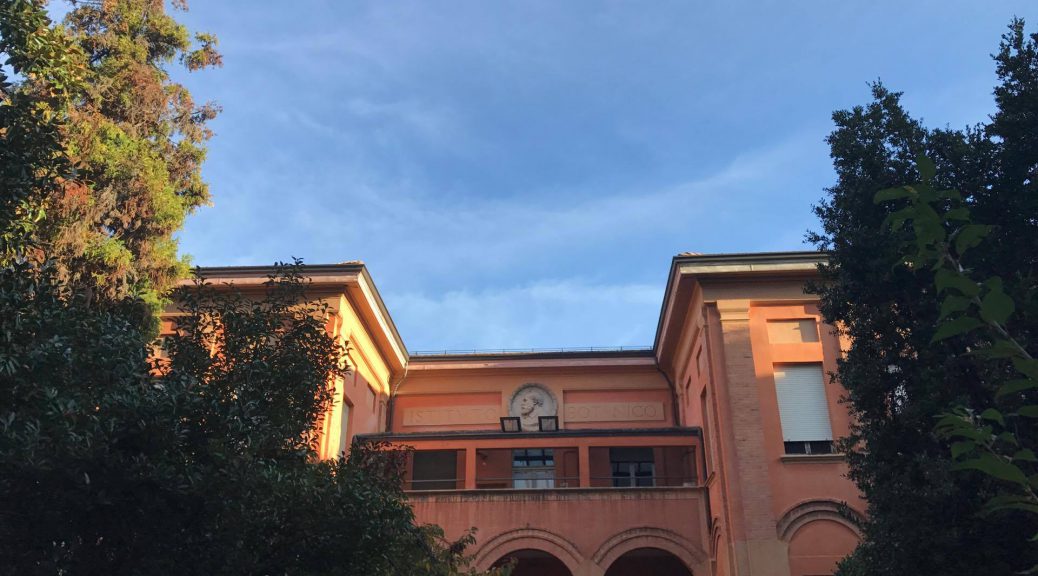 Featured Image: Building in which my neurobiology course it held.

Last week I began a new phase in my abroad experience when I began my course at Alma Mater Studiorum Università di Bologna. Thus far I have been taking various courses in the Italian ECCo program itself, but now I am in the midst of working through a course that is not only taught in Italian while being surrounded by Italian students, but at a university generally just far different than Vassar. Adding to this experience, I could’ve decided to take one of a plethora of courses that the university offers, but instead I thought I would try to advance my biology major by taking a neurobiology course at a level beyond what was necessary for my program.

There are a number of aspects of higher education with which I was unfamiliar when I began at the university. The University of Bologna is claimed (not without some dispute) to be the oldest university in the world. It is a large and prestigious public university, meaning that I or anyone else can just go and sit in on a class purely to learn. The only way to get credit for the course is to signup for an exam. Many of the students are evaluated by an oral exam that they take after the course. In my case, I will have to take an oral exam in Italian, partially explaining a research paper, along with a more open-ended discussion of course material. From this exam, the professor will assign a grade for the course. While I have less time to prepare for the exam than other students because I have a flight scheduled for December back to the US, the other students have weeks or even months of time to study for an exam that may not take very long. Yes, it’s a bit daunting!

So there were some immediate differences in the academic setting in which I’ve found myself with respect to Vassar. The course is taught in a lecture hall in which the professor will teach to more students than one would normally find in a classroom at Vassar. I would generally feel that there would be less class discussion at the university because of its size, but being that this is a science course that leaves little to interpretation, the difference in that respect hasn’t been too great. Students can still ask questions and participate if they would like, but I feel that, as we were told beforehand, there is generally a stronger divide between student and professor than in the United States. This is even built into the Italian language to some extent. Students are expected to use the formal version of Italian when addressing professors unless the professor otherwise permits the informal “tu” form. I don’t think professors are much sterner (my professor is very friendly in fact), but Italian students understand that at least initially they should have a level of respect for educators which is also expressed by their language.

Another example of different student behavior (also prompted for) is that students don’t really eat much or at all in class. It’s not like in America in which students will bring a bagel or maybe a plate from the Retreat to class. There is of course coffee available to students as in the US. However, there is actually a coffee vending machine in the academic building from which students can grab an espresso or the like. Whereas coffee is also often an essential part of American students’ lives, it is normal for many Italians to almost mark the beginning and end of a class with cigarettes (usually hand-rolled).

The neurobiology course that I’m taking is at the level of “Laurea Magistrale.” The levels of education in Italy are slightly different than those which are found in the American system. After a few years of study, a student will finish their work in some field, for which they will have finished their “Laurea” degree. A “Laurea Magistrale” course, from my understanding, is one about equal to a 300-level undergraduate or first-year master’s course. Luckily for me, research papers, a significant component of the course, I think will remain in English, as are many slides based on texts in English. That being said, there are also slides in Italian and the professor teaches only in Italian (with the exception of some English that’s become a standard for some scientific speech), with the questions asked by students and my exam also being in Italian!

The location and building in which my course is taught are both very different and strangely familiar. The building is off of a main road in the city but once one gets into the gates there is this bright orange-ish building at the end of a stone path, with various species of plant life on either side and a small fountain to the right. In this way, the area reminds me of the arboretum of Vassar, despite the fact that I first walk off a city street to get to it. At this point in my abroad experience, both just starting a course and in the final months of my time here, I continue to be grateful for this experience that has proven challenging, excited, and beautifully new and different week after week.