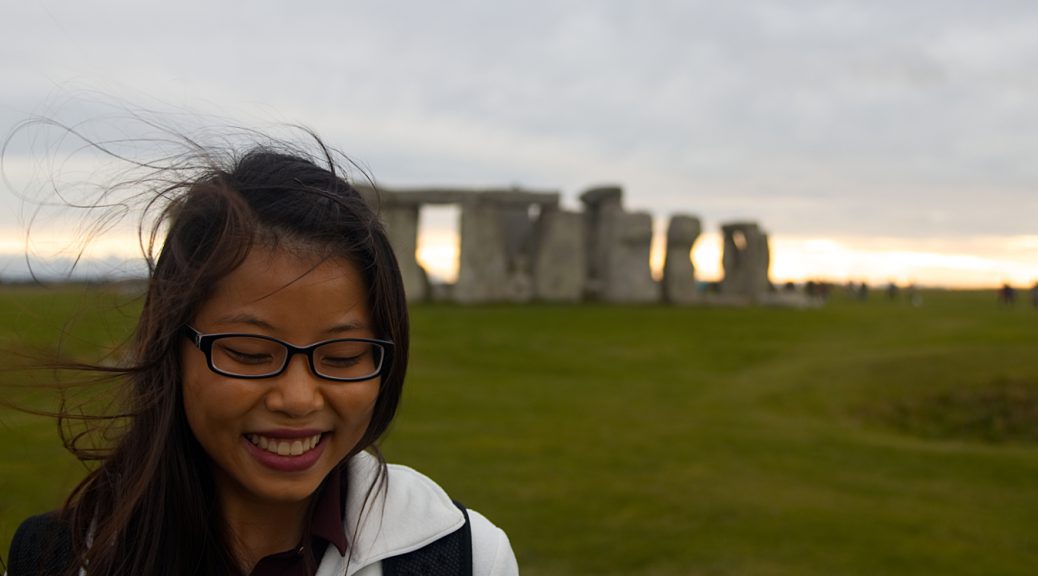 Featured image: Finally made it to Stonehenge after finding a field of cows instead.

“That is part of the beauty of all literature. You discover that your longings are universal longings, that you’re not lonely and isolated from anyone. You belong.”

My mother tried to teach me how to belong.  She taught me to compromise, to be silent to avoid conflict, to pick battles wisely or preferably not at all.  She said that sometimes we have to force ourselves into spaces, even when there isn’t room.  For a month now, I’ve been looking for a space to belong in.  Everything is still new, and that makes you jump into any space that will take you, even when it’s not meant for you.  And so I jumped, and down I fell.

I have asked myself every single day whether I belong here. It seems like I’m surrounded on all sides by intelligent people, and most days I question whether I’m intelligent enough to study alongside them.  These feelings are not unlike the ones I’ve had at Vassar, but here, they seem magnified.  I’ve met people who are artists on iTunes.  I’ve met PhD students.  I’ve met people who have held monkeys on their shoulders.  Everywhere I look, I feel like everyone is overachieving and I don’t even achieve.  I’m studying beside future lawyers and chief executive officers, people who are going to have jobs in finance or people who are going to move on to get masters degrees or PhD’s and I don’t even have a plan after I graduate.  I feel goal-less in a goal-oriented space.

I went to Oxford the other day, and I’m not one to plan, so I got off the bus with a camera, an apple, and no map.  Streets in England tend to meander.  You can walk all the way up and down one and go nowhere.  And everywhere hidden streets pop up to take you elsewhere, and when you try to trace your way back, they seem to disappear altogether.  I walked about the city, stumbling into beauty as I went.  I saw cathedrals and their spires, places I’ve only seen in films, and small street stalls, hidden gems tucked carefully away for locals to escape to.  I can’t tell you how to go the way I came; I can only tell you where I’ve been.  I can only tell you where I made it accidentally.  I didn’t know where I was going, only that I was going somewhere, wherever my feet could take me.  And I went to Bath a few weeks before.  I stumbled around and accidentally found Rome in the middle of a posh English city.  I tried to find Stonehenge without a map, and ended up in a field of cows.  The list of random things I’ve found in England due to tendency to wander aimless goes on and on.

This is poor planning, obviously, but this is always how I’ve lived.  Some people make grocery lists.  They enter, leave with what they came for.  I wander through the shelves, finding what I came for and some more.  Some people come to uni with plans.  They get the degree they came for and leave.  I, in my inability to plan, take time to explore.  I wish I were the other way.  I wish I had a path.

My English professor swears upon one difference between narrative prose and narrative poetry.  He’s trying to teach me to make effective sequences.  Narrative prose, he says, is linear.  It’s one straight shoot to the end, usually.  But narrative poetry is circular, he claims.  It’s a spiral, a blossoming, from one central place.  It’s a promise, not of an ending, but of going somewhere, wherever metaphor can take you.  My belonging is inside my poetry, I’m finding.

When these feelings of inadequacy and of not belonging rise, I remind myself of this difference.  I am intelligent.  I am capable.  Talent is not outside me; it is within me.  Most importantly, I belong right with these people around me.  I’m just taking a different path, and that’s okay.  I’m just blossoming from within.  I can’t tell you where I’m going, but I promise I’m going somewhere.