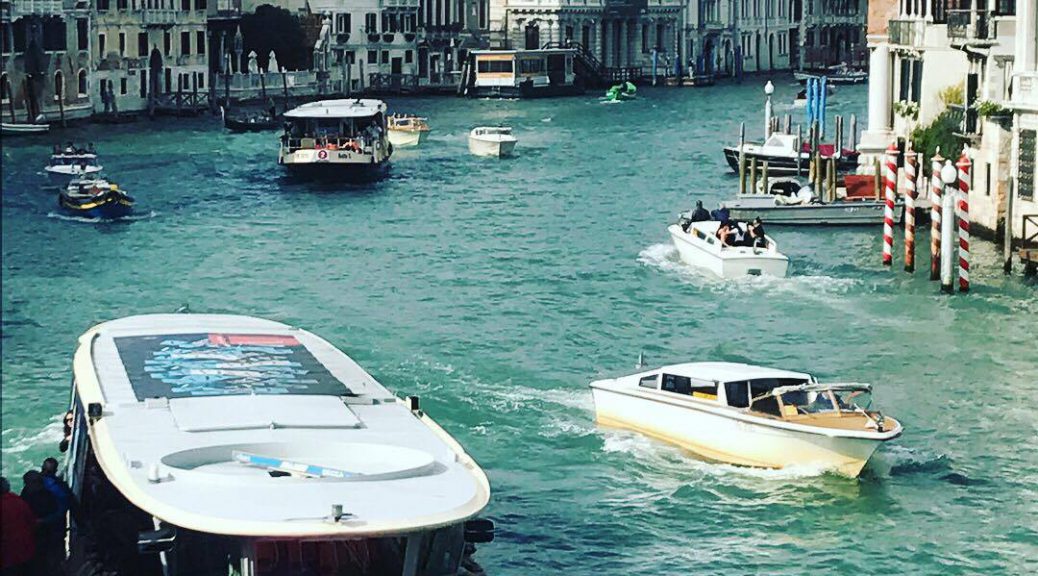 Venice. It’s that iconic city used as the setting of countless films and novels, whose panorama is depicted by painters from the venders on its streets all the way to Van Gogh. Because of its reputation, Venice stirred emotions and even some concerns during my little trip. I was met with feelings that were expected, and but also some that caused me to take a more realistic approach to the magical city.

Upon my arrival in Venice, taking the train down that long track that connects the island to the Italian mainland, I was met with excitement and wonder. Finally stepping onto the island, I was awestruck by the beautiful architecture and canal system (searching for the gondolas!). From then and throughout the trip I was thinking about the representations of the city to which I had been exposed throughout my life. This was it, I was finally in Venice! I was prompted with a lesson before the trip on some of the different aspects of Venice for which I should search, items that I could finally experience with my own senses.

This was a city filled with diversity and culture especially distinct from the rest of Italy because of its history as the center of trade between Europe and the Middle East. For that reason, not only is the architecture classically Roman, Gothic, and Baroque, but also Byzantine (including the famous Basilica di San Marco). The street signs on the way to the basilica revealed the unique Venetian dialect that lacks double consonants, ends many words in constants which is uncommon, and uses the plural and singular articles in a way that would be considered incorrect in standard Italian. When the dialect is spoken, one can almost make the connection between it and the Germanic influences of the city due to the fact that prior to its unification with Italy, it was under Austrian rule. And finally, after I walked through those alleys and labyrinth-like paths and entered Piazza San Marco, I was nearly overwhelmed with the fact that I was standing in one of the most renowned and beautiful spaces in Europe.

After we finally got settled in, I noticed more aspects of Venice that were beautiful, some that made me grateful that I’m not studying my second language there, and some that made me feel some sort of pity for the city. Venice is a city of bridges from which one can gaze upon its stunning urban structure and design and, on some of the bridges, a number of selfie sticks . There were vendors catering to tourists, Italian was just one language among many, and there were CROWDS.

I went into a little caffe/bar to get something to eat, and the man taking my order immediately used English after I ordered in Italian. But that’s not the strange part. I have an accent of course and he might’ve just been trying to accommodate me. While I was still there, another person entered, ordered in Italian, and again he responded in English. The difference is that she didn’t seem to understand the English because she was likely actually Italian, and the man working then decided that it would be best to use Italian.

The Venice of the stories and works of art is overrun with tourists and that can become a real issue for the people who actually live there. I understand that I was and am a tourist too and I don’t think there’s anything wrong with people visiting the city (on the contrary, I would encourage it!). However, the waters of Venice are occupied by a number cruise ships which have been a problem for a couple of reasons. The cruises can damage the Venetian environment by polluting the waters which is especially a problem for a city often compared to a fish not only because of its geographical resemblance to the animal but because the canals run everywhere throughout Venice. The cruises then let huge crowds into the city until it is overrun, and the streets become filled with people just looking for a quick selfie without much positive contribution.

I’m beyond grateful that I had the opportunity to visit Venice, a city filled with history and culture unlike any other anywhere in the world. It’s a trip that I would recommend to anybody because it offers so much that no matter what your interest, whether it be artistic, historic, cinematic, literary, or anything really, Venice has a place for you. Despite all the changes and challenges to the city, my hope is that Venice remains that same mystical city, unique in its culture and identity, admired for generations to come.