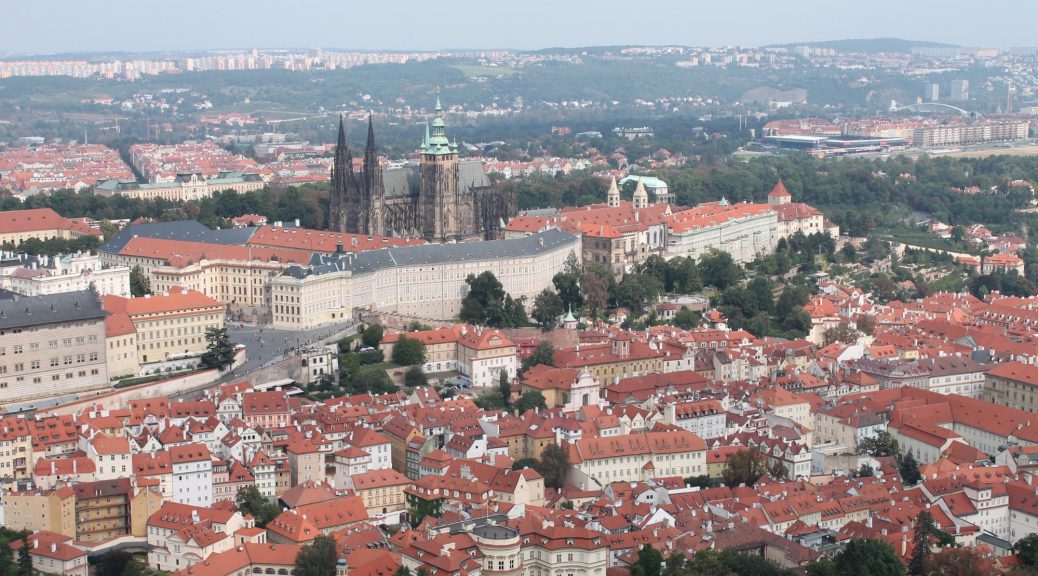 Have you ever been minding your own business on your way to work or school, allowing the tide of commuters to buoy you along as you board the metro, when you suddenly experienced a total collapse of your subjective self-identity? Because I haven’t.

In fact, I had no idea this was a normal thing for anyone to experience until one day in my film editing seminar, when our professor screened a short film that depicted such an existential encounter. Afterward, she casually asked the class if we had also transcended the limitations of our psyche while waiting for our subway stop. Since then, I’ve been pondering my perception of day-to-day reality and wondering how I might stretch its limits.

After all, there’s no better place to get in touch with my mystical side than Prague—a city so positively glimmering with beauty and intrigue that just looking out the window of my classroom feels like poking my head into a dreamscape. So how am I doing? Well, so far this semester, I have had zero instances of my psyche leaving my body without the help of psychedelic drugs. (Or with their help! Don’t worry, Mom!) Yet I have had a couple of moments that felt just a little surreal, just a little magical, as if I had unwittingly stepped into an alternate world almost exactly like mine—except not quite.

One evening, I decided to take a detour on my walk home and explore the nearby mini-wilderness of Stromovka Park. I pulled up my hood against the gentle rain that filled the humid dusk with mist and let Google Maps lead me into a quiet neighborhood where I had never ventured. As the blue dot on my phone inched closer to the great green expanse of the park, traffic on the streets and sidewalks dropped away and I felt like I’d walked into a ghost town, save for a lone group making merriment outside a pub. Given my horrible sense of direction, it was no surprise that I couldn’t locate the entrance of the park. I almost gave up for the night and turned back—but as soon I stood still for a moment, I detected the faraway sound of music, as faint as the raindrops shimmering in the air.

Like a lovesick sailor lured by a siren, I hurried in the direction of the music until I came upon the park’s entry gate. Inside, shadowy figures of dogs out for their nighttime walk or meandering couples with hands clasped broke the spell of the ghost town, but rather than joining them on the pathway, I kept following the muffled music. A tiny staircase led down to a forested region, and I padded along, a lone traveler in the dark, until the woods opened up again and the amorphous strains guiding me along coalesced into lyrics and melody. “Mamma mia, here I go again / My my, how can I resist you? / Mamma mia, does it show again / My my, just how much I’ve missed you…”

Delighted, I continued on to the source of the music, a fenced-off outdoor concert venue with spectators chilling at picnic tables. Given the fact that my Czech vocabulary has still failed to advance beyond ordering sausage at the grocery meat counter, I was too nervous to try and find out if I needed a ticket to get in. So I headed off in a different direction down the path, and was met with a giant, ornate clocktower glowing before me, a bustling restaurant spilling warm light at my feet, and a Ferris wheel beckoning me in the distance. A little further along, trams sped in and out of the park, just grazing the edge of the forest. Slowly, the park dissolved back into the neighborhood and spit me out a couple of blocks from my flat. “Dancing Queen” was still faintly audible behind me, my final link to the enchanting world of Stromovka.

Fast forward to this past weekend, when a few friends and I made our long-awaited trek to another jewel in Central Europe’s already overstuffed crown: Budapest, Hungary. By our second night, we were already in love with the city, and we were prepared to fall even deeper upon our visit to the iconic Széchenyi baths, where 21 pools are fed by thermal springs and 50 euros will let you into an exclusive Saturday night disco “sparty.” (We didn’t spring for that offer.) After changing into our swimsuits, we followed the crowds out into the chilly twilight to the outdoor pool area. Steam rose from the huge, clear blue pool in front of us, and bathers floated past, cozying up to massage jets on the edges of the bath or letting the water from one of the myriad fountains flow over them.

We soaked for a while, soothed by the silky water, before wrenching ourselves out into the cold air and booking it to the other side of the patio to explore a different pool. This one had a sort of simplistic labyrinth in the center: a wall in the shape of an open circle whose top edge reached just a few inches out of the water. I paddled over to the opening and realized that there was a strong current pushing me counterclockwise, whooshing me around the circle and depositing me back in the surrounding still waters. I immediately went for another round. After a few more trips around the circle, my friends and several other bathers had caught on, and the labyrinth was full of people, while the whirlpool current seemed to be growing ever stronger. Over and over I did the loop, sometimes holding hands on both sides in a train, sometimes bumping shoulders with strangers, all the while giggling and shrieking like a little kid each time the current took hold of me and lifted my toes off the pool’s floor.

All too soon, the hour grew late, our fingers grew pruney, and it was time to board the metro back to our Airbnb. I sipped Hungarian rosé (tasty AND incredibly cheap) as we watched The Illusionist, and the next day we journeyed back to Prague, where streets were once again ulice instead of utca and a U.S. dollar gets you 22 crowns rather than 266 forints. As of this writing, I still haven’t returned to explore the rest of sprawling Stromovka Park. I’m not sure it will ever again bring me that sense of childlike wonder I had when I first discovered it. That fleeting sensation is the same one I had in the whirlpool at Széchenyi, and the same one I am teaching myself to chase as often as I can. Perhaps I won’t be feeling my soul merge with the collective consciousness of the universe anytime soon, but a little everyday enchantment is good enough for me.