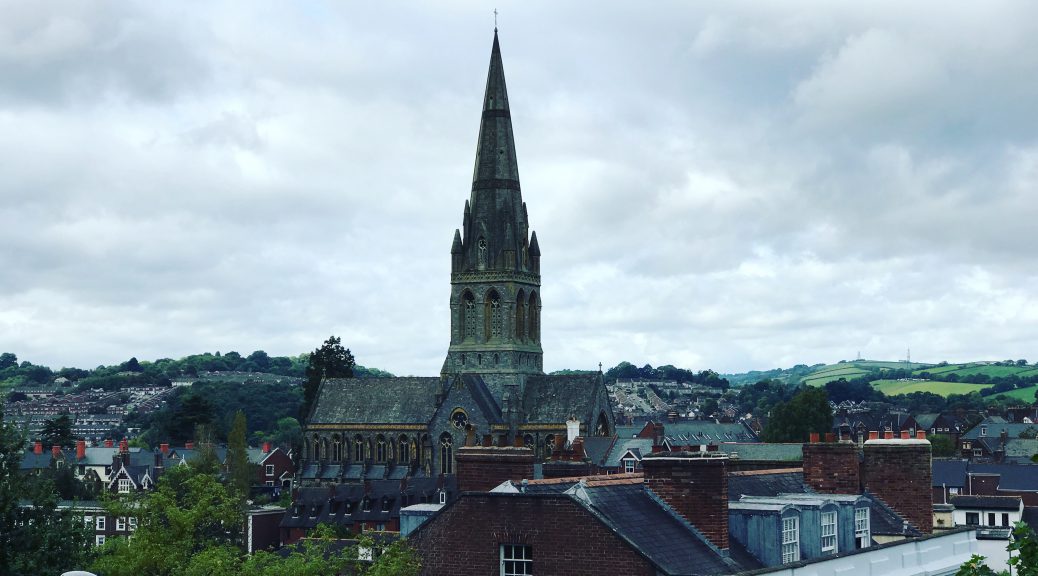 Featured image: This is a hidden view of Exeter.  It requires leaving Primark at the Guildhall the wrong way.

If you ever want to find out what you’re made of, book a flight to a foreign country and arrive with nothing. Put all the things that bring you comfort in your checked luggage and have your airline lose it.  This will make you uncomfortable; this will push you out of the space you thought you occupied and into new ones.  You will desperately reach into all the spaces available to you, searching for belonging again, but this will bring you poetry.

I arrived in Exeter, Devon on the 16th of September with only the clothing I had worn to the airport, and a backpack containing my (lack of) money, some various chargers, and a mini stuffed alpaca.  As you can probably guess, none of the above was very conducive to beginning a semester of studying in a brand-new country, and I was concerned for the contents of my luggage. I, an idiot, had packed my extra medication and the majority of my valuable things into my checked luggage, not wanting to carry it onto the plane, and I paid dearly for it. However, the airline losing my luggage was possibly one of the best things that could’ve happened to me. In trying to find my luggage, I discovered not only the fragments of myself that I had so lovingly tucked into my suitcase, but also myself as a whole and what I’m made of.

Admittedly, the first week was difficult. Having only three articles of clothing (which I had already been wearing for two days) and one pair of shoes (a pair of flip flops) made day-to-day living close to unbearable. And instead of going to fun events and joining clubs during orientation week, I spent most of my free time on the phone with the airline trying to locate my missing baggage and file claims against the airline. I was frustrated and isolated. While my flatmates were going out every night, I sat alone in my room carefully rearranging my life and finances to see what I could afford to replace. I stressed and I cried, but I didn’t give up. I even attempted to find humor in this situation by starting a Snapchat series titled “How Can Kimmie’s Life Fuck Up Today”, which detailed the whole fiasco in pictures with short, pithy captions.

Thank God for my flatmates. I wouldn’t still be here without them. They have become a strong and incredibly uplifting support system. They have helped me maintain a sense of humor, and they’ve made me laugh. And despite the fact I turned down their incessant calls to go out with them during Fresher’s Week, they haven’t given up on me. They still invite me everywhere they go, and we’ve become so close in this short time. We have inside jokes, and we mock each other, and best of all, we celebrate each other. I couldn’t ask for a better group of people to live with, and now we do everything together. There aren’t finer people I could go grocery shopping and cook dinner with. They’re even great people to explore England with.

Now that classes are in full swing, we’re a lot busier, but we’re still constantly planning outings and weekend trips. I just recently went to Exmouth with them, and we have plans to visit Stonehenge, Cambridge, and Oxford in the next coming month.  We’re even planning to possibly visit other countries together during the winter holiday.

My schedule is packed full of lectures and seminars during the week, but I can’t complain. I was lucky enough to have fallen in love with my major my freshman year, and becoming a freshman again as an international student has allowed me to fall in love with my major all over again. Despite the long, cold walk to campus every morning, sometimes a little too early in the morning, I am excited to be there, to engage with new professors and new ideas.  My seminars and lectures have been energetic and engaging, and I’m excited about what I will learn this semester. I came to Exeter to become a better writer, to grow as a poet, and despite the short time I’ve been here, I feel as though I’ve already grown, both as a writer and as a person.

There are hiccups in growing; there are pains. Growing invites and includes new territory. Sometimes you have to lose everything and grow out of it. But you will make it. I made it, and this will give me poetry.