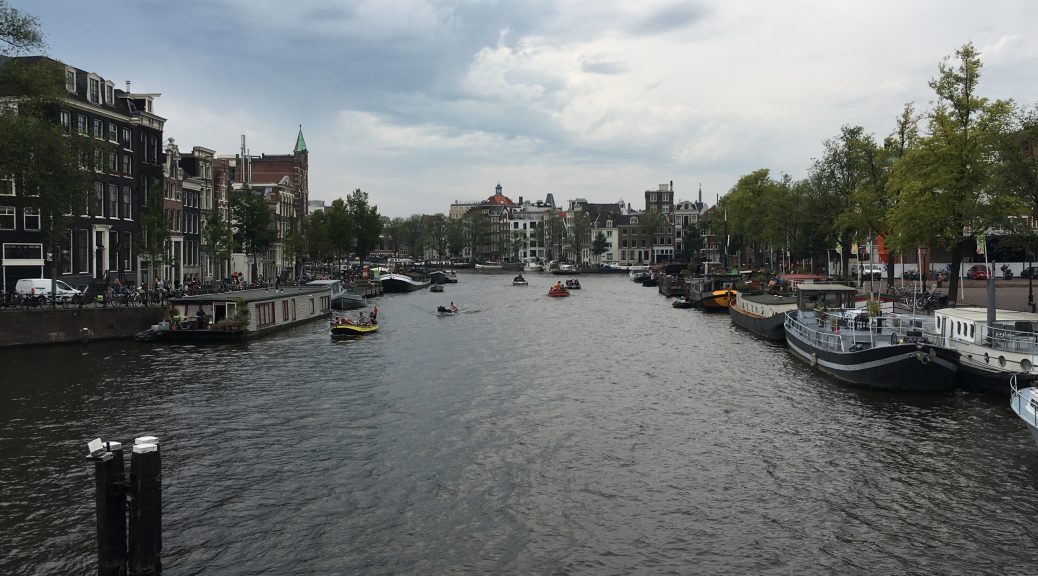 Featured image: A canal in the heart of the city center.

Studying abroad is something that has been on my radar since I was in the sixth grade when I attended my first college visit.  I remember walking into the hallway where international relations and study abroad opportunities was centered at the University of Kentucky.  There, I saw a bright green sign with the country flags of where all their students were currently studying; I can’t remember exactly how many countries were represented, but it was more than I could count on both my fingers and toes combined.  I was amazed at the endless possibilities that this one sign presented for my future.  Since that moment, studying abroad my junior year of college was a definite.

AND NOW HERE I AM.

I am living in a new city, in a new country, on a new continent for FIVE MONTHS.

Before leaving the States, I had so much positive reinforcement from everyone who has either studied abroad ~or~ has visited Amsterdam in the past twenty years.  Everyone I talked to said how much fun the experience—and the city—is going to be; that Europe is “so much better than the states”; among other things following a similar notion.  But, I think many people I talked with had a grandiose notion of what it is to study abroad.  While I am having the time of my life, there are many simple, everyday tasks that are much harder when living in a country where English is not the official language.  Here, I discuss three that have complicated my first few weeks in this country.

1. A typical grocery run takes much longer when having to translate every. single. item.

The first time I walked into the Lidl (a typical, cheap grocery store) down the street from where I live, I was spun into a tizzy.  The goal: make a spaghetti dinner for me and my host-mom. I had a list of four ingredients: pasta noodles, tomato sauce, ground beef, and onion.

First, I had to locate the general area of the items—a lot like how going to a Target that is different from the one you are accustomed to feels, but this time in a foreign language.

Once located, I had to translate everything.  I picked up a can of what I thought was tomato sauce, but it turned out just to be pureed tomatoes.

After gathering all items, I made my way to the checkout, only to find out the hard way that: one, they don’t accept my credit card and two, they don’t have shopping bags.  Thankfully, a very nice stranger behind me paid for me AND it was only a seven-minute walk back to my house.

2. Public transportation is great if, and only if, you understand the language that is being spoken.

Bicycles are probably the most common form of transportation in Amsterdam (in fact, there are more bikes than people in the city), but, before having the ability to find a market and buy a bike, I had to get around Amsterdam somehow, especially because I live an hour and a half walk away to my classes and the city center.  My thought: public transportation is the easiest –and cheapest—alternative. Besides Metro North (which is not anything like a tram or subway system), I am completely inexperienced with public transportation on my own.

So, I downloaded google maps and city mapper, walked to the nearest tram stop, and knew that I needed to go 13 stops.  To save phone battery, I closed out of both apps and enjoyed the ride, looking at the cute shops and coffeeshops that passed me as I rode.  After stop seven, the conductor came onto the overhead speaker and had a long, drawn out announcement…in Dutch.  This was the third time that an announcement happened, so I assumed it was standard procedure.

It was after the final six stops, when I got off the tram, that I realized I had gone in the wrong direction.  But even more than that, the tram I was on took a different route because of a collision that had happened ahead.  Apparently, that is what the announcements were about.  After walking for about 35 minutes to get to the right tram (headed in the right direction this time), riding the tram for another hour and fifteen minutes, I finally made it to my destination, just about an hour and forty-five minutes late.

Since this, I have bought a bike and rely solely on my own two feet to get me places.

3. You can predict the weather forecast for almost every day: rain.

It rains, on average, 189 days a year in the Netherlands.  But it isn’t rain that we, in America, are accustomed to.  It either downpours for 15-20 minutes and then is bright and sunny again, and does this throughout the day or it rains little, cold drops for hours upon hours until it finally decides to clear up (but only for a few minutes).

The Dutch have an app—buienradar—that specifically says when it is going to rain in the Netherlands; it is uber specific, down to the five-minute marker, in fact.  And for the most part, it’s accurate.  I use the app to plan when I need to bike home, for there is nothing worse than biking home for 35 minutes while becoming more and more drenched as you ride.  But, sometimes, the app is wrong.  And I did not properly prepare.

When biking in the rain, I highly recommend rain pants, pants that go over your pants to keep you dry (just like a rain coat, but for your pants!); a water-proof—not resistant—backpack, so your papers and other loose things in your backpack stay dry; and most importantly waterproof shoes.  I, so far, have none of these items (or a drier at my house) so when I get wet, I stay wet.  But, those things are on my shopping list and will be purchased soon (so long as I can translate all the items and ensure I’m buying the right things).

In short, studying abroad is more than just studying abroad.  It’s living abroad.  And adapting to new ways of doing everything.  I’ve been here for three weeks and understand a lot more than I did two weeks ago.  But there is still so much to learn, so much to experience, and so much to have small panic attacks about. But for now, I’ll just keep going.