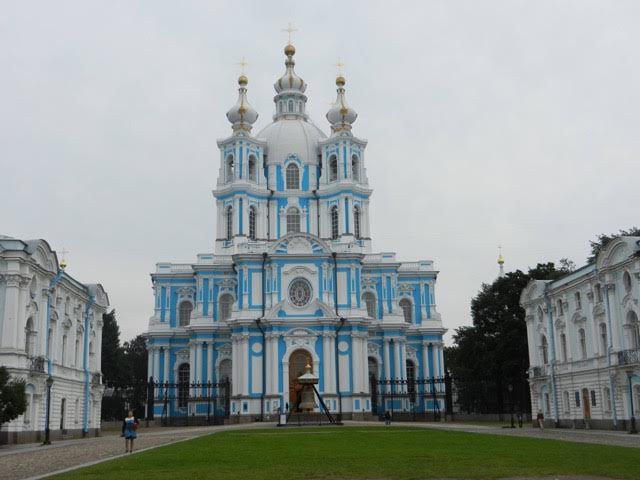 Featured image: Smolny Cathedral (1748-1761) on the grounds of Smolny Institute for Noble Ladies. If this style looks familiar it is because the architect who designed and built The Winter Palace, Rastrelli, also spearheaded the design of this cathedral. As an interesting anecdote, the nearby Smolny Institute is notable in Russian cultural history as being a school for upper class women. In Russian, the word “Smolinska” (I think that’s right, it might also be “Smolinka” I can’t remember) carries the same connotation as the term “Vassar girl” does in American culture.

Two days before I left for Russia, we lost power. A fairly ferocious thunderstorm caused a large tree branch in my neighbor’s yard to propel itself through the electrical lines and bam! I didn’t even hear the tree fall and yet in one second my entire neighborhood went dark. About as soon as it happened my mom called for a family meeting. She essentially told me not to panic, that we would still be able finish my packing done in time, with or without lights. At most, I was irritated that we didn’t have power. How would I be able to continue to sculpt my ever important social media presence if I didn’t have the wifi to check instagram every two seconds? But I wasn’t panicked…not about that anyway.

I decided to study abroad in St. Petersburg, Russia approximately a year ago. With little fluency in foreign languages (besides Latin) and only a small interest in the programs that my English major had to offer, I decided to look into the program available to me through my Art History minor: JYA in St. Petersburg. The more I heard about it, the more I liked it. And the main reason I liked it was because it was so, for lack of a better word, different. I don’t speak any Russian, my family is not from Russia, I do not know anything about the culture and customs, and I would be able to study at The Hermitage, one of the largest art museums in the world. I love traveling abroad and visiting new places, and in the back of my mind, I had figured that I would see Russia someday. But here I had the possibility of going to a place that even my well-traveled parents hadn’t been to, and at the ripe young age of twenty no less!

But in those two energy-less days before I left for my program, the reasons I initially chose to go so far away were the cause of a great crisis in confidence. When I had chosen the program, it was purely theoretical. Yeah, I would be going to Russia, but that was in far too many days to count. I would be there eventually, but that was only in the back of my mind. I didn’t have to consider the implications or think about it. That is until September 5th and 6th, when it was all I could think about. The reassurances I told myself that I would learn Russian soon enough or that I would be able to deal with the cold were half-baked. The subtext of my thoughts, which I tried and failed at pushing down, were that I was going to Russia and that was a really big, real fucking scary prospect.

Those feelings didn’t leave as I made my way to JFK with my parents on the morning of September 7th. Coming from a small city in Pennsylvania, the trek was an all-day odyssey, starting with a train to Penn Station, a train on the Long Island Railroad, and you guessed it, yet another train to the correct terminal. I assumed that the moment I had to walk away from my parents at the airport would be messy; not messy like when you have too many ciders and hug everyone at Beyonce Mug Night. Messy like when you have too many ciders on a regular Tuesday evening and end up crying over an UpC milkshake in the retreat. (Is that analogy relevant anymore? Am I aging myself by making an UpC reference? Jesus, this must be what my parents feel like.) And sure, there were tears. I am fortunate enough to have a great relationship with my parents and being half-a-world away from them is not ideal. But in that moment, my mom swooped in (as she usually does), with some sage advice. As if reading my mind, she told me that going to Russia will indeed be hard; that particularly in the first few days of my homestay, there will be moments when I feel anxious, overwhelmed, or homesick. (I know that this doesn’t seem helpful yet, stick with me though.) But she continued that in those moments, I should take a step back and tell myself that those feelings are normal. Even though they may be unpleasant, I am still allowed to feel the way I do. Carrying that reassurance with me, and a ridiculously overpacked suitcase, (why I thought I would need three bodysuits in Russia is beyond me), I boarded the plane. Roughly twelve hours later, I would arrive at the apartment of my host mom, Natalya. (Apparently her home is on the same street where a young Vladimir Putin grew up. I’ll check back later to let you know whether or not I start having urges to ride a horse shirtless.)

Fast forward to now. I am sitting on my bed in my room in 34-11 Baskov Pereulok and I have been in Russia for exactly a week. Last Friday, I was exhausted and overwhelmed. Today, I visited the iconic Hermitage Museum for the first time and worked out at a Russian gym I joined. In the last week I have successfully and regularly taken public transit, explored my new neighborhood, maneuvered a severe language barrier, started my classes, gotten a taste for Russian cuisine, and more. All these things seemed like an impossible feat to me not too long ago, yet here I am, in one piece.

I don’t want it to seem as though I am pontificating about the ease of studying abroad. In between these exciting developments there have been a few miscommunications, wrong turns, and a steep learning curve. In recent history I can’t think of a time I’ve felt more feeble than the occasions when someone has spoken to me in Russian and I had no idea what they were trying to tell me. But I also cherish the empowerment I felt when a few days ago someone asked me a question in Russian and I was able to respond, “Sorry, my Russian is not very good” (in Russian) and then they gestured to what they wanted from me and I understood. In short, the ebb and flow of life abroad is difficult and rewarding, scary but manageable. Actually, at first it kind of feels like living with a broken power line– a sudden switch to darkness in which one must fumble around for awhile. But since I’ve been abroad, like the lightlessness that has been lifted from my house, and the panic has left. And I’m starting to find my way.