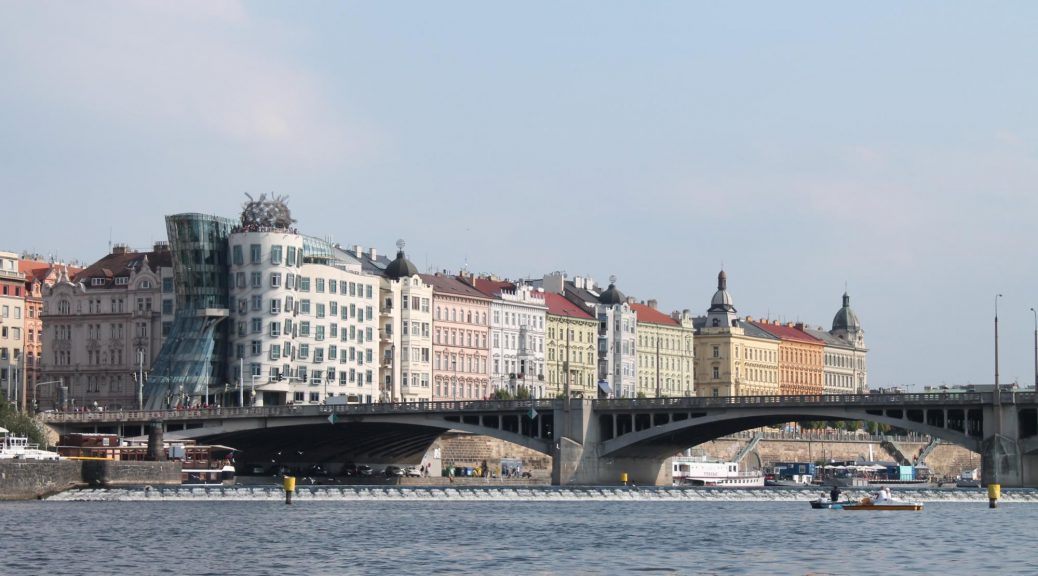 If I had to sum up my first three weeks in Prague with one word, it would be “trdelník.” My Czech pronunciation leaves a lot to be desired, so I can’t tell you how to pronounce it (I’m still saying “turtleneck” in some type of undefined accent), but I can explain what it is: a cylindrical cake, cooked on a spit, dusted with cinnamon sugar and nuts and sometimes brushed with Nutella or filled with ice cream. In the tourist-packed Old Town or St. Wenceslas Square, it’s impossible to travel more than a few yards without bumping into a street vendor hawking trdelníks, usually underneath a sign advertising them as the traditional Czech treat. While these little sugar bombs are everywhere, they are by no means unique to Czech gastronomy—in fact, they can be found under different names throughout Central Europe. In the most trdelnik-laden corners of the city, Prague itself bears similarities to the ubiquitous dessert: Its current iteration is created and maintained for tourists, relentlessly advertised and sweetened to the point that a glimpse of the real Prague that lies beneath is an elusive experience.

As for my status, the distinction between tourist and local is a blurry one for me. I’m not marching around with a selfie stick or bantering loudly in English on the tram, but I could never hope to blend in with Prague natives in the few short months I will be here, especially since my Czech vocabulary is limited at this point to ordering in a restaurant. (I prefer dark beer, or “černý pivo.) I was surprised to learn during orientation that we should avoid eye contact with strangers and should certainly never smile at them; doing so would make them think there was something wrong with us. This latter cultural norm has been one of the most difficult to remember, especially since before I knew how to say “good day,” my default would be to smile at the storekeeper when I walked in, apparently incriminating myself as a sociopath in the process. I’m lucky enough to have a spacious flat in a hip and tourist-free neighborhood in Prague 7—one of the city’s northern districts, located on a peninsula formed by the meandering Vltava river—and I feel most like I belong here when I’m casting about for new coffee shops or dropping into our local 24-hour Mexican spot for a spontaneous midnight burrito.

Since Prague often feels like it’s made up of two separate worlds—the polished tourist realm above and the domain of the locals beneath—it’s only natural that, to act like a Czech native, you have to literally dig deeper. This notion was reaffirmed when I was introduced to Vzrkovna, an utterly unique bar that has apparently been the hotspot for generations of students in my Film Production program. A flight of stairs descends into a funhouse-like network of catacombs, with candles and colorful lighting illuminating walls enveloped by graffiti, a smaller out-of-the-way bar selling regular and spiked tea, and a room fully dedicated to foosball. Best of all, the bar is inhabited by a huge and ancient wolfhound, leading to its sobriquet “Dog Bar,” and pups belonging to other patrons can often be spotted perched in the rafters or observing the live band.

In fact, animal-themed establishments seem to be a trend here. At the Cat Café, you can pay a flat fee for unlimited drinks, snacks, and bonding time with cats, and my roommate and I are determined to check out Krákora, a bar where pumas allegedly stroll around the beer garden (so basically Cat Café on steroids). A block down from my apartment is Cobra bar, which has demonstrated a disappointing lack of snakes. This is nothing, though, compared to the letdown we experienced during our weekend visit to the picture-perfect medieval city of Český Krumlov. The city’s castle, built by the influential Rosenberg family in the thirteenth century, features a forested moat advertised as the home of a family of live bears. Tragically, we arrived to the news that all but one of the creatures had died—and the remaining one was asleep or hiding under the bridge. Nevertheless, the weekend was a magical vacation from my vacation, with the high point being a hike I took to an incredibly peaceful hilltop overlooking the city, where sleek horses grazed and children frolicked in a field behind a quaint chapel.

Travel is addictive, and I’m already abuzz for this weekend’s trip to Berlin (not least because it will also be my birthday), but there’s still so much here to discover. Last weekend, on the hunt for inspiration for the short film I will be creating this semester, I strolled through the sprawling, leafy Letná Park near my flat. As my roommate and I passed by the beer garden, we paused to watch two guys standing over a wood carving at a picnic table, bumping music and taking breaks from chiseling and sanding to sip their beers or briefly jam out. They said they’d been working for about a month on the sculpture, which appeared to be a psychedelic rendition of a family of wood nymphs. Further up the hill, skateboarders raced and looped around the park, and the gigantic, functional Prague Metronome, placed in 1991 to replace a destroyed monument of Joseph Stalin, continued its steady swing. By the time I write my next post, I hope to be able to report on dozens more of the city’s secret and not-so-secret spots—along with identifying the most authentic trdelník of them all.