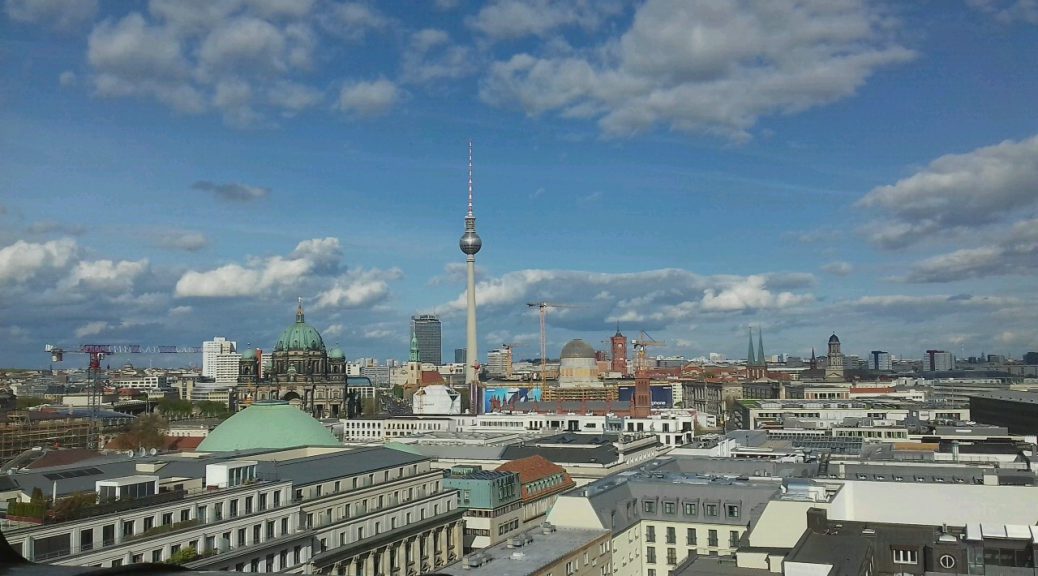 “Berlin is a summer city!” they all say. “Nothing like Berlin in the summer!” Sure, I suppose when you’re resigned to 8 months of the year being gray and chilly, the warmth of the sun at last is a welcome repose. On the other hand, if you are a coddled American accustomed to air conditioning and screens on windows, the sudden heat wave and increasing number of insect visitors to your bedroom are not so welcome. I like a little sunshine as much as the next person, but I was certainly not ready to be thrust into summer weather. At least it’s no longer miserable to be biking everywhere, one Berliner practice I have heartily embraced.

Somehow May has already come and gone, marking both graduation time for everyone back in the States and the halfway point of my semester here. As other students are set free to frolic in the sunshine and while away the days (or, more realistically, get on that internship/summer job grind), I still have half a semester’s worth of classes and the daunting task of the “Hausarbeit” ahead of me—a rigidly structured research paper, in German of course, on which at least 50 percent of my grade depends. What an exciting way to spend June and July!

As much as I would like the work part of the semester to be over, that would mean that my time in Berlin was drawing to a close, and I’m certainly not ready for that. I’m becoming more fond of the city daily. I even find myself thinking about things I’d like to do “next time I’m in Berlin”—a little silly given I still have 3 months here and could just do those things how, but it’s a sort of way of coping with the fact that I will have to leave at the end of the summer.

I cannot say that Berlin lives up to its hype for every person every day. Some days, being a student attending a university in the southern dregs of the city, you just do not see much else besides the inside of a library and the view out of a bus window. Perhaps I’m biased, not having been lucky enough to snag an apartment in one of the inner boroughs. Sometimes there’s just not enough time in the (albeit increasingly longer) day to get out and do something “Berlin.” But when there is, you can bet it’ll be quite an experience.

Exhibit A: The Haus. A bank building turned 5-floor art installation, destined to be destroyed just two months after its debut. And that is as much a part of the artistry of it as the installations themselves. Once it’s gone, it’ll be gone forever. Photos are strictly not allowed, encouraging patrons to just absorb the art and keep it in the only place it has a chance of sticking around, the fallible human memory. It’s all very matter-of-fact and I found it hard at first to reconcile myself with that attitude. But when I let myself get immersed in the experience, it was incomparable.

Every single surface was covered or transformed in some way. Even the bathrooms were turned into art, to the extent we weren’t sure if they were usable or not. By the third floor or so it began to feel like a dream. Although every room was different, common themes included: glow in the dark, naked bodies, intense colors, politics and weird textures. One room was entirely covered in moss; another featured just a giant pair of feet poking through the ceiling. It was overwhelming, over the top, and totally fascinating.

Exhibit B: Erster Mai. The first day of May, also known as Labor Day here, is a major holiday centered ostensibly on politics and workers’ rights, but also featuring a generous amount of live music general revelry. The biggest festival takes place in Kreuzberg, where they shut down several U-Bahn stations and thousands of people just roam the streets with their beers and/or anti-fascist banners. It seemed a little odd to me, the mix of protesters and drunks, but it appeared to make sense to most everyone else. There are always some riots and car burnings, but luckily I wasn’t witness to anything besides relatively peaceful anti-capitalists and thunderous German punk rock.

Then there are the still-Berlin-but-will-be-in-any-guide-book things:

Exhibit C: the East Side Gallery, which you probably would know by the famous image of the “socialist fraternal kiss” between Leonid Brezhnev and Erich Honecker—the two old white guys making out. Anyway, there are over a kilometer’s worth of excellent, thought-provoking paintings along this preserved piece of the Berlin Wall.

Exhibit D: Schloss Sanssouci. It’s a rococo (read: everything is unnecessarily gold) palace in Potsdam, which is a bit south of Berlin, but makes for a good day trip for those times when you want to learn about some extravagant Prussian kings and wander through endless gardens.

There’s a sort of urge here to be über-edgy and alternative and only do the coolest, most underground things. But almost nothing is really truly hidden in the age of the internet. There are still places you would likely never find if you or your companions weren’t in the know. Clubs in old warehouses, far out of the way of traffic; bars hidden behind doors so covered in stickers and graffiti you almost don’t see them. On the other hand, there’s enjoyment to be had in the guide-book spots around Berlin, too (see above!). 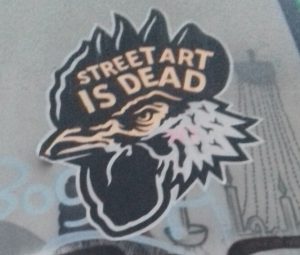 I hear a lot of complaints about how Berlin is changing fast, and how it’s not like it used to be. But neither is anywhere. Everywhere changes, like it or not; that’s the way of the world. And to this newcomer/outsider’s eyes, Berlin still has a flavor all its own, one I plan to savor these next few months.