Thankfully, this isn’t my final goodbye to Paris. Although my program is wrapping up, classes are over, and I have 30 pages of final papers to turn in by this Thursday, I’m lucky that I get to stick around for a little while longer.

Ironically, I haven’t been in Paris all that much over the past month. Between April break for two weeks and a few weekend trips, I’ve missed my routine and my Eiffel-Tower-passing commute.

However, the time I have been in Paris lately has been interesting, especially with the conclusion of the French presidential elections. Although the French are also dealing with the frightening global trend of far right leaders coming into power, the process of their election is sometimes hilariously different from our system back in the U.S.

Like the States, France goes through two election cycles and the first was held a few weeks back on April 23, placing Marine Le Pen (far right) against Emmanuel Macron (centralist). My host, Catherine, was nice and offered to take me with her to go vote. Well, technically, she had voted at 9 a.m. and I was firmly unconscious when she attempted to wake me up for the initial visit, so she actually just took me to go and see the polling location. 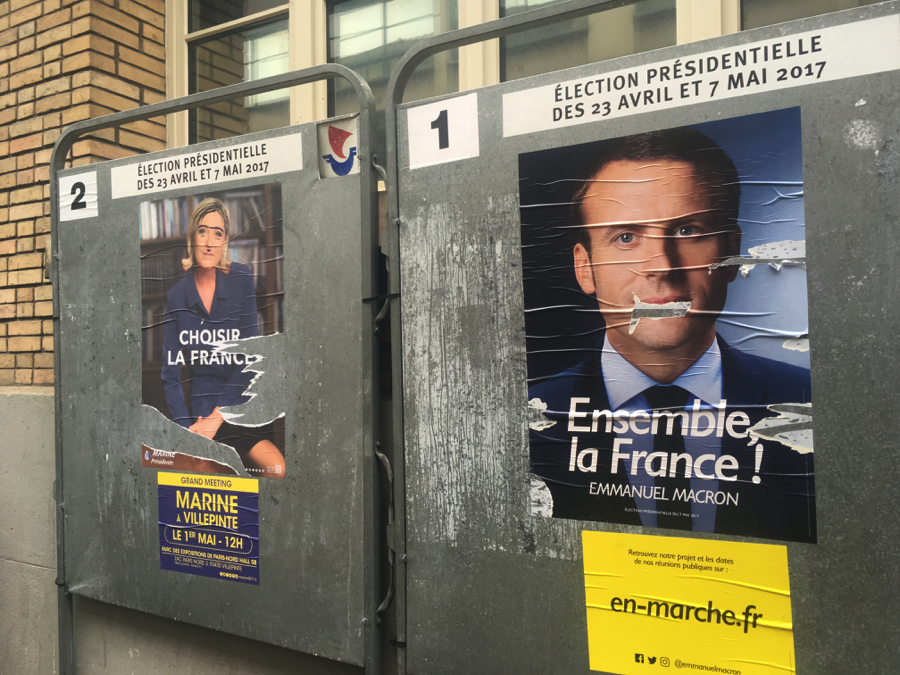 The polling place for our precinct happened to be an elementary school right down the street. Outside, all eleven presidential candidates’ posters where hung in their sanctioned locations on the official school bulletin area. Some candidates’ faces were more vandalized than others—it’s hard to find a Marine Le Pen in Paris sans Hitler mustache. Generally, leftist candidates are associated with the color red and rightist candidates blue. 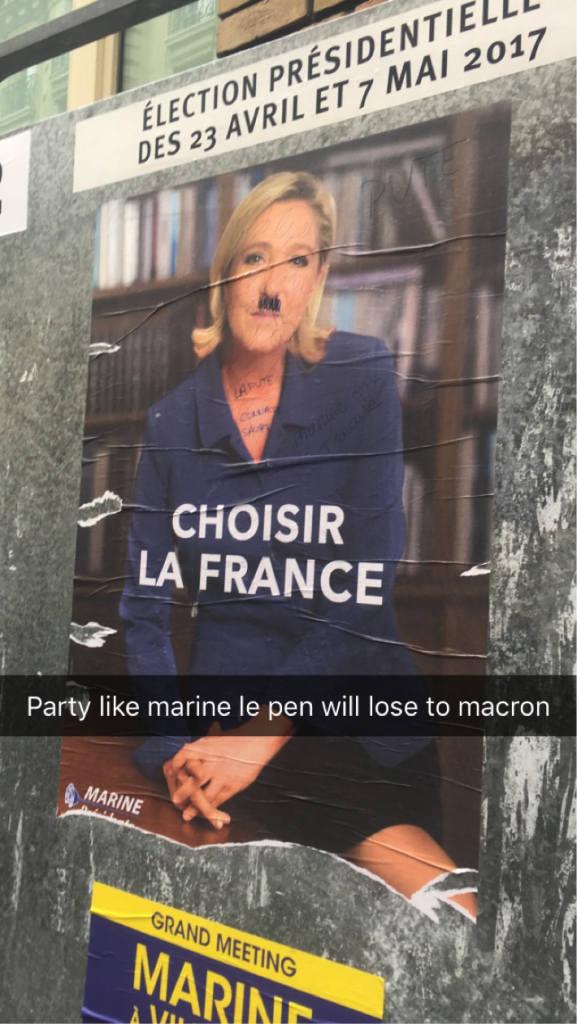 Things only got a little strange when we entered the polling station. While some things were familiar—enclosed privacy areas and tables set up to sign in—a lot of what I saw seemed foreign and a little absurd. First, one could remark on the absence of retirees and little old ladies running the place. Everyone volunteering was under the age of 40, maybe even 30. Then, you see the big stacks of notecard-sized papers, eleven stacks to be exact. Allow me to clarify. As there are eleven candidates, each stack bears the name of one in particular. Voters are encouraged to pick up at least two candidates’ names (for the sake of privacy, although some people take all eleven) and then obtain their official, super secret envelope. They then transfer into the privacy barrier and put their selected candidate into said envelope. That envelope is then put into a big clear box and later, each envelope is extracted and the name on the inside is announced and tallied. In the year of our lord 2017, in a world where most Parisians move about Paris on strange, electric unicycles, their high-tech, revolutionary, modern system for casting presidential votes happens to be pretty damn similar to how I voted for a student body president in High School.

However, in the wake of the preliminary results, France has been on edge. For the first time in a long time there’s not a leftist candidate and a lot of people feel like they’re choosing between the lesser of two evils with Macron and Le Pen. A lot of people couldn’t even bring themselves to watch the debate last Wednesday. To be fair, it was mostly yelling, Macron making a lot of hand gestures and Le Pen laughing and holding up articles she had printed out about Macron.

The whole event lasted for two and a half hours and was absolutely wild. The set made it look like some sort of bizarre game show with flashing lights, giant timers and both candidates sitting on a glowing gold stage. The moderators had absolutely zero control over the two and although I’m surprised how much of it I understood in general, I’m pretty sure all of France got lost when Le Pen would start in on Macron, her yelling punctuated by his frustrated chant of “Madame Le Pen, Madame Le Pen.” Other stray observations from the debate include how freakishly blue Macron’s eyes are (like basically white walker, Game of Thrones blue) and how everyone, moderators included, was wearing the same blue pants, white shirt, blue blazer combo.

At our house, I watched the debate with Catherine in the living room while Thierry hid out in the kitchen (he had no desire to watch the battle unfold). He actually did come in for a moment, only to remake that in most normal households, it’s the man who’s on the couch watching TV after dinner and the ladies who are cleaning up. However, as he also remarked, this is by no means a normal household and chuckling, went back to the dishes.

In other strange, French election news, another relatively foreign element of the French election cycle has been the lack of buzz about the candidates’ personal lives. Here, candidates don’t live completely under a microscope and people tend to focus on their policies rather than their family, partners, or otherwise. And yes, while the scandal of François Holland (a rightist candidate) paying his wife and children for party jobs that they didn’t really do was discussed, as was his accepting of 12,000 € worth of suits as gifts from supporters, generally people seem to have little interest in what their candidates do when they aren’t at work.

I only came to really understand this yesterday when randomly, I stumbled across and article about Macron and his wife, Brigitte. The article was about their relatively large age difference, his 39 to her 64, a refreshing change of the older man, younger woman narrative. Their backstory is a little strange, considering that they met when he was 15 and in high school and she was his drama teacher, 40 and married with three children. However, the real shocker for me was the fact that this was the first time I was hearing about it, literally hours before the final election Sunday (today). Despite the fact that I’ve talked to professors and my hosts, even attended university talks about the elections, no one has ever brought it up. Although a quick search has yielded a few articles about their relationship, it doesn’t seem to captivate French voters in the way that it certainly would American voters.

Pre-election revelations aside and with Macron now officially voted into office (as of three hours ago) it will be interesting to see where France will go from here. During this election cycle, tensions have been high and in the same way that our presidential elections became a rightfully polarizing topic between friends and family members, similar sentiments color French relationships as well. In the same way that the US had to sort of take a step back and reevaluate after our elections, I think France has a bit of reexamining to do itself, despite the happy results. If I could sum up the sentiment surrounding today’s election results in a word, it would be relief. I suppose it’s akin to the feeling of when you slip a bit on the stairs, but catch yourself just before what could have been a bad fall. For a second your mind sort of lives out the worst-case scenario and forces you to consider what could have happened. Now, I think France can breath a sigh of relief and hopefully move forward in an effort to learn from what could have been. 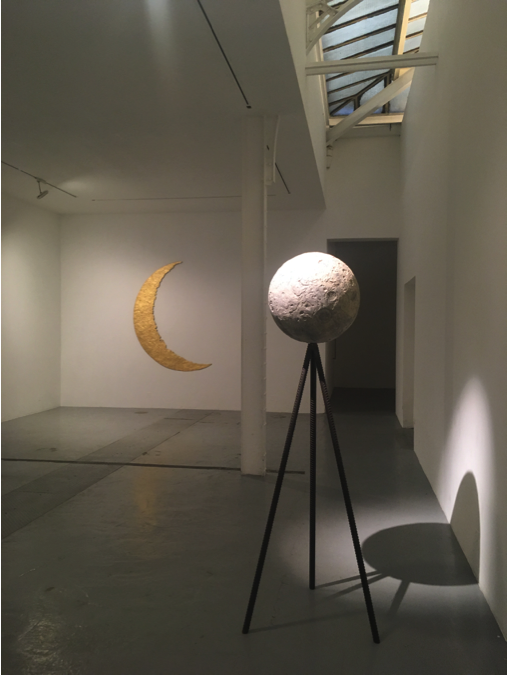