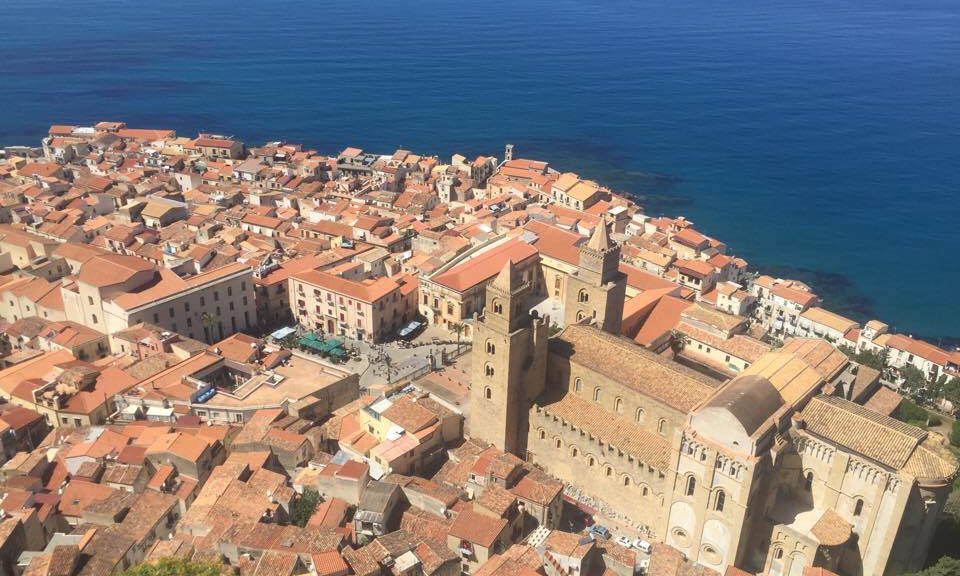 I have always wondered about the origin of the seemingly illogical term “flying off the handle” indicating absurd anger. Actually, I have never thought about this, but it is at the very least a tenuous transition into the subject of this blog post, in which I detail my experience flying off the boot shaped peninsula of Italy to Sicily, the soccer ball the Italian boot seems to be kicking.

In a way, I sort of jumped onto the trip to Sicily at the last moment. My friend Frank from the program who goes to Bowdoin had been planning to go down there for a bit of sightseeing and then an Easter celebration with his long-lost Italian relatives. In fact, I remember being with him while he spoke on the phone with his “so-called Aunt” as he described it, wishing I had some vague Italian family to spend a holiday I barely celebrate with. Regardless, I was able to sneak into the trip itinerary, minus the actual Easter part, and was looking forward to a spring break in the sun on the beach.

One thing that I noticed about the leadup to the trip was that here in Bologna everyone was so excited to hear about us going to Sicily, saying over and over again how beautiful it is there and how good the desserts are. Even for Italians, they seemed extremely over the top about it, which began to make me realize that this was no routine vacation, but rather Northern Italians saw such a trip as an adventure to a far away and foreign place. Our program directors and professors warned us that some of the cities were dangerous and that it would be almost impossible to get around with public transport. I was told to only pay in cash to protect my credit identity. I was starting to wonder a bit if the beaches and desserts would be worth having to continually think about my safety and transportation.

It turns out that the ideas instilled in me were, much like everything Italians do, slightly exaggerated. True, Catania and Palermo, the cities I flew in and out of, were a little gritty. However, apart from a few unwanted conversations with strangers, I found them to be manageable, and both even enjoyable. As for travel, there were frequent, cheap and reliable trains from Palermo to each of our respective destinations (Cefalù, Taormina and then Catania). All our Airbnb hosts were extremely nice, speaking with a lovely Italian accent that sounded like standard Italian with something trapped in your mouth. Our host in Taormina also sometimes used the historical past tense, the “remote past” usually reserved for talking about something like Roman history, to recount episodes from her own life.

Our time in Palermo was concerned mostly with eating. We mixed in a few sites, such as the ruins of a castle, a good historic square and a lively fish market. However, the main focus was the consumption of the traditional “Spleen sandwich,” a food that tastes much better than its description or name, as well as fresh seafood. I also had my first Sicilian cannolo, and as they said you never forget your first. It was the end of a long hot day, and following my traditional first sunburn, I needed a pick-me-up. Needless to say it was perfect: creamy, crunchy and filling. We got another after dinner as well.

The next day, we headed to Cefalù, a tiny city nestled between a spit of sand and an enormous rock structure called “La Rocca.” Though hiking up the steep face of the fortress was hard work in the blazing sun, the view it afforded was spectacular. La Rocca also contained the ruins of a 12th century castle at its peak, a structure taking advantage of a naturally defensible place with a practical view of the coast. The finish line for our hike was a cold swim and afternoon spent on the beach, glancing up now and again at the summit we had reached hours before.

Early next morning, we set a course for Taormina, a beautiful city perched, not under but directly on a steep coastal hill. Though getting there involved taking a bus up a sharply curving road that would make even those not afraid of heights want to shut their eyes, the town was adorable, with a gondola down to equally fantastic beaches. We passed the time talking extensively with our friendly elderly Airbnb hosts, doing nothing on the beach and seeing the monuments in the city. The most remarkable of these sights was the Ancient Greek theater, built in the 3rd century BCE. Frank and I stayed put for a while in there, perhaps partially due to exhaustion from long days of sun exposure, but perhaps also to soak in the fact that over 2000 years ago people sat in the same places, observing spectacles with snow-capped Mount Etna smoldering politely in the background.

Through the logistical organization of the next days that saw Frank head to his so-called relatives’ house and me to Catania to stay in a strange hostel and then fly to the mainland, those minutes in the sunny theater stuck with me. It was the culmination of a perfectly relaxing trip spent basking in the sunlight and both natural and manmade beauty that in that moment were so well integrated. The sheer age of the theater, which itself is dwarfed by the age of the active volcano helped put my little worries—like the fact that my embassy-issued Italian ID says I am 41 and is thus invalid—into perspective.