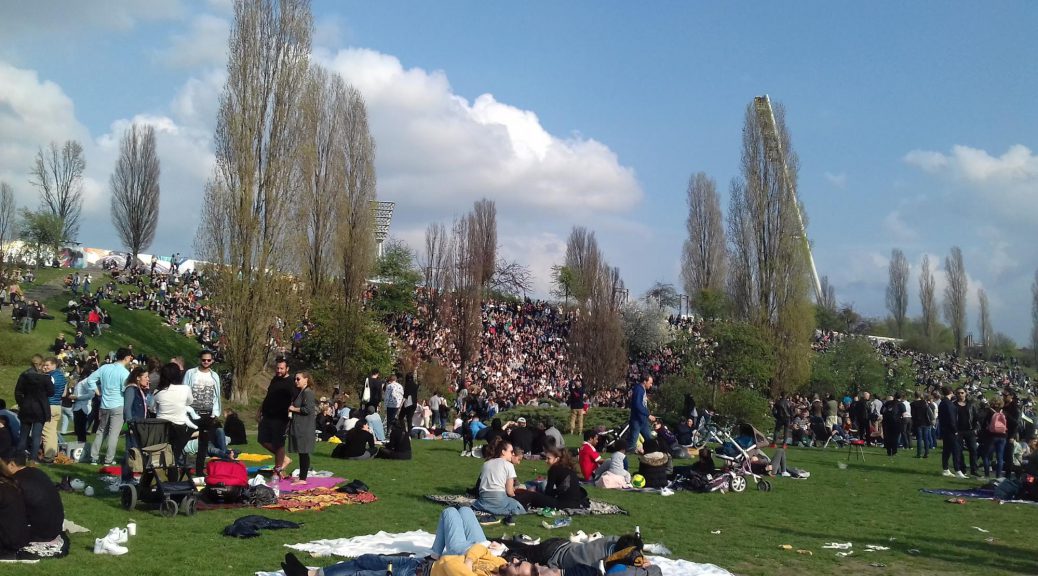 Well, we had nice warm, sunny weather for a few days there. Otherwise, cloudy and cold as usual.

Above is a perfect example of what you would likely never hear in a German conversation. There’s pretty much no such thing as small talk; why waste your breath talking about the weather when anyone can step outside and see for themselves? Besides, there are a lot more interesting things going on in the world. Namely, politics.

It’s a particularly interesting and somewhat nerve-wracking time to be an American in Germany, where there is so much consciousness about history and politics. To put it plainly, everyone wants to talk about Trump. Thankfully no one’s been belligerent about it, but I am super conscious of being American and the connotation that has.

Of course there’s enough going on in European politics to keep everyone busy without even worrying about the U.S., especially the recent and upcoming votes in Germany, France, the Netherlands and Turkey. To get more of a feel for the political climate here, I went to a rally held by an organization called #PulseofEurope, which describes itself as “a citizens’ initiative that does not pursue any political party’s aims” and generally supporting the European Union, diversity, basic human rights, and so on. They hold rallies every week in major cities across Europe, and the one in Berlin is in a beautiful square called Gendarmenmarkt. It was crowded and loud and all conducted in German, so I’m not sure I understood everything, but the general vibe was peaceful and supportive.

So I’m doing my best to embrace all the facets of living here, including but not limited to a more active interest in politics. I’ve set up a bank account in German, as if handling finances in English weren’t scary enough; jumped through the bureaucratic hoops to register my address; and, of course, I bought Hausschuhe: soft slippers to wear inside, which (at least among the older and more traditional set), must replace your street shoes at the door.

And of course, one of the touchstones of setting up in a new apartment as a young adult: a trip to IKEA. Actually, make that two trips—in 48 hours (thanks to the weirdly-sized mattresses here, and a desperate need for sheets). Despite initial bumps in the road, I am finally starting to settle in…just as almost everyone else studying abroad is finishing classes, taking finals, and preparing to return home.

The German semester has actually not even begun. This, unfortunately, means that I am simultaneously registering for this semester’s classes at the Freie Universität and next semester’s remotely at Vassar, which is overwhelming to say the least. But it does mean I’ve had time to work out routines, and, more importantly, travel routes.

I’m getting very good at the public transportation thing. I was already used to taking the underground/metro/subway/whatever you want to call it, but I admit I had a grudge against buses—they can run late, you have to find the correct bus stop, they bounce a lot and you can hit your head if you stand up at the wrong time… But now, the neighborhood I’m living in isn’t super close to any S- or U-Bahn stations, so I’m obligated to ride the bus every day to class or wherever I need to go.

The S- and U-bahns are widespread but connect at different points to the central line, the Ringbahn; to live outside The Ring is not recommended, both for practical and snobbish reasons, but I’ve been taking my chances a bit further south and doing fine. I’ve now experienced all of the possible methods of public transportation: the U-Bahn (U stands for Underground), S-Bahn (an above-ground rail system), the tram (yes, they still have that!) and my beloved buses. The most favored mode of transportation in Berlin is definitely the bicycle, though; I have yet to get one, but I’ve been assured it’s the best way to get around and enjoy the city.

To offset the efforts I’m making to adjust to the ins and outs of living in Berlin, I’m still doing plenty of touristy things. One drizzly afternoon everyone from the BCGS program, together with a good number of the other international students, took a leisurely boat ride down the Spree River to see a bunch of the major landmarks of the city.

We also went to Bauhaus Dessau, the school/workshop-turned-museum designed by famous architect and founder of the Bauhaus School, Walter Gropius. The style of architecture is very distinct, modern and recognizable, the sort of thing you’d probably realize you’d seen before if you saw a picture of it. See?

Probably my favorite place I’ve been so far, though, was not with the program but on a rare sunny Sunday, when I traveled about an hour to see the famed Mauerpark. It’s a giant park situated along the former division line of East and West Berlin; a graffitied section of concrete still runs through part of it. Masses of people gather on Sundays to mill around, listen to musicians, sing karaoke, and hunt for treasure in the flea market—you can find anything from records from the 80s to furniture to vintage rollerblades there, and get some classic Berlin street food as well.

Berlin, I’m pleased to say, is much more relaxed than I expected. The general expectation of timeliness and well-thought-out plans does exist, but there’s definitely also time and space for relaxing (see above), and some wiggle room when things don’t go according to plan.

Case in point: One of the things they warn you about when traveling to Germany is that everything is closed on Sundays, so you really must do your shopping for the weekend by Saturday at the latest. There are actually laws about what hours shops can be open, and it is true that almost all of them are closed on Sundays. However, you’re not out of luck if you find your stomach rumbling on a Sunday afternoon; it’s totally possible to find a coffee or a bite to eat. You can always find what you need. Even things you don’t need, but are certainly quite nice. Like a warm chocolate croissant at a quarter to three in the morning (true story).