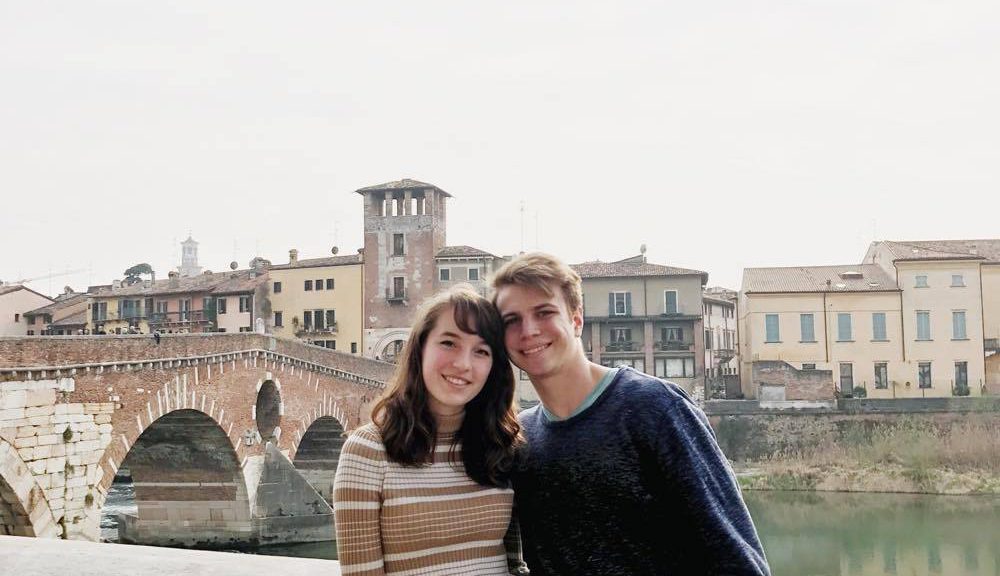 A Tour Guide in Italy

March here in Bologna has been a month of visitors and midterms, which both have presented an opportunity for me to pretend I know more than I do, albeit to two very different audiences. The first audience consisted of my girlfriend visiting during the first half of Vassar’s spring break and my mother and brother, who arrived a few days ago. The other, of course, included my professors, hoping for verbose and accurate explanations of modern art paintings, postmodern literature and medieval urban history in my slowly improving second language.

I do not mean to say that my March contained only “Zandsplaining,” a term coined by my mother and repurposed to the tune of Jason Derulo’s Talk Dirty (Zandsplain it to me) by friends at Vassar. Although I managed to convert many of my lessons on Bologna’s history into useful tidbits during walks through the city, the visits also served as a chance for me to learn. All of the visitors have imparted the wisdom of a first impression of Bologna, Italian culture and my life here.

My girlfriend arrived at the moment I was taking my art history midterm, my last midterm of that week. Thus, that ephemeral post-exam feeling was both heightened and extended by reuniting with Clare for the first time since December. Despite terrible jetlag, an overnight flight and feeling ill enough to request that I make her plain penne pasta the first night here, she rallied for a trip to Florence the next day. It was an exhausting but fantastic day that included art history fact battles, a hike to a monastery and tacky selfies in front of Duomo. None of our other days were quite as full as that one, but we enjoyed the first 65 degree days of spring, that coincidentally arrived at the same time she did, in both Bologna and Verona.

As the slightly more emotional one in the relationship, I must admit that I conducted myself during these days in a “mushy” manner. However, I want to make it clear I was not the one to request getting a heart shaped lock at Juliet’s fabricated house in Verona. I had to put my foot down to avoid that type of thing. We both drew the line at how the live action version of the classic love story “Beauty and the Beast” leaned into the tale’s slightly concerning relationship with bestiality. Nevertheless, we had a fun time watching, and I discovered an easter egg in the Italian subtitles when the interspecies lovers switched from speaking to each other in the formal to the informal.

Things that I have started to accept as the norm here were talking points for my girlfriend as a visitor. For example, the heightened level of interaction and comfort with strangers meant that a few times she was shocked to learn that I hadn’t known the person or shopkeeper I was chatting with. Except for when we left a little too late for “Beauty and the Beast” and had to move quickly, walking around in Italy was a less destination-based affair that included conversations, mostly with people trying to sell you things or go to their restaurant, but still.

For any American, the culture of drinking continually, legally and slightly more responsibly is fun to take part in. Growing up in a country where I signed papers allowing me to be drafted for the army, but technically could not buy booze or even go to a TH party that has more than 25 people, it feels remarkable to see a culture that doesn’t adhere to such regulations. I recently celebrated and survived my 21st birthday pushing the definition of responsible. However, with Clare I kept it classy, and consequently felt more adult, a feeling aided and abetted by the fact that an Italian word for girlfriend (fidanzata) also means fiancée or in adjectival form “betrothed.”

Following my girlfriend’s fantastic visit, the most important woman in my life arrived: my mother, with my brother. It has been great to have them both here these past couple days. Much like with Clare, I had not grasped how much I had missed them until I saw them. It’s been a treat to have my mom once again fussing over my posture, or telling waiters that do not speak English that it is my birthday. Nothing beats seeing my brother, on the cusp of a torrential gain of height, experience the primal joy of Bolognese pasta, or my mom’s timeless and slightly macabre fascination with reliquaries containing the ribs, skulls or teeth of Saints.

I also got to demonstrate my ever growing capacity for angrily speaking Italian when a waiter, as I ordered drinks for our family’s table the evening before my 21st birthday, explained to me in English, “In Italy we have a law that you need to be 16 to drink alcohol.” Two days later, though I recognize that it is comedy gold, I am still utterly offended to type it. My reaction was so incendiary that he did not actually end up carding me, and we ended up having a laugh about it, albeit a bit forced from my end. I suppose that an integral part of my legality will be removing an ID from a wallet.

Being abroad has been a formative but at times lonely experience. Sure, I love my Italian housemates and the Americans on the program, but in reality, the people I love are a continent away. Seeing Clare and my Mom and brother and the heinous set of pictures my closest friends posted on my Facebook wall for my birthday has got me thinking even more about each of them, and my very different life in the States. I have never in my life felt homesick, but I do miss these people and countless others in powerful surges, especially when I see them again. At least I have one more week to fit in with the Italians and be a mama’s boy.