As I sit reflecting on my first month in Berlin, I can hardly fathom how fast the time has flown by. I know it’s cliché (what about having a travel blog isn’t cliché), but time really could not be moving faster right now. Living in a huge, bustling city like Berlin is such a dramatic and welcome change from life at Vassar, and I’m so grateful that I’m able to have this experience.

I suppose I can begin at the beginning. Disclosure: writing exclusively in German has probably completely screwed up my English prose, so please excuse the choppiness of this post. I arrived my first day to our hotel, where we were staying for only a few days before moving in with our host families. I had two hours to kill before I could check in, so I went for a walk around the area. To be honest it looked a lot like Beverly Hills, with designer stores and fancy glass shopping centers. Right in the middle of all of this consumerism was the ruined tower of the Gedächtniskirche, a structure which was left in its post-WWII state a reminder of the damage incurred during the war. 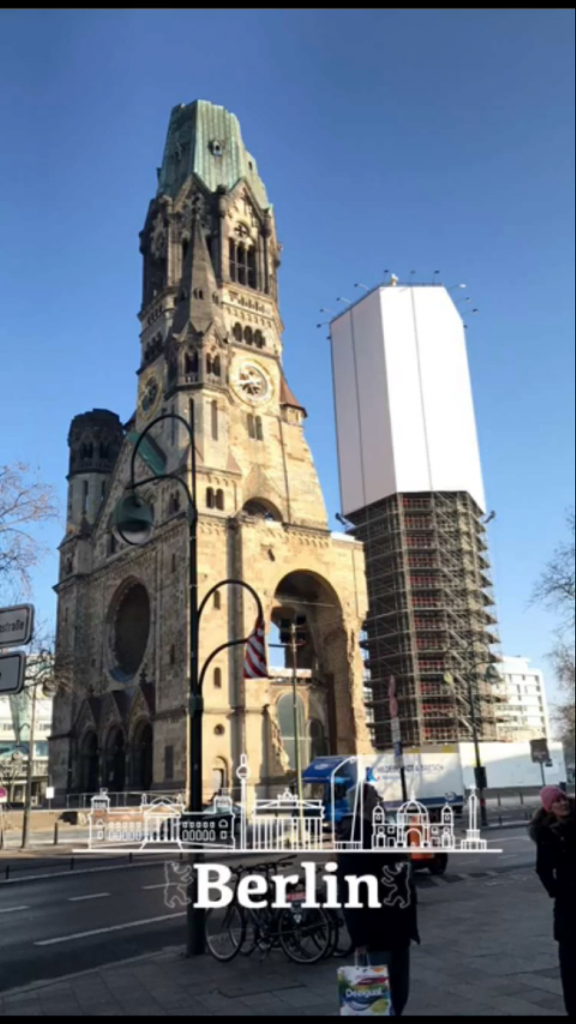 Seeing the church was my “oh right this is Europe” moment. Later in the day I met my roommate, and now one of my best friends on the program, Alessandro from Oberlin. He is also a vegan who likes classical music, so you could say it was fate that brought us together.

After some pretty mundane and casual orientation days, we were introduced to our host families. I was unbelievably nervous; I knew nothing about the family I was going to be living with for six months, and I hadn’t spoken a word of German during the entirety of break. Suddenly in walks a young man with an older couple, and my program coordinator, Claudia, introduces all of us. I learned that I was going to live alone with the younger man, the son of the other two, named Niklas, in his apartment in Kreuzberg. Not exactly my idea of what a host family situation entailed, but after conversing a bit in my crappy German, I learned that we had a lot in common. He also plays the piano and has his own piano in his apartment, which was a welcome surprise for me! My apartment turns out to be absolutely ideal. I have a great location, right in the “hip” area of the city, and my own balcony off my room.

Classes started the following Monday, and wow is it rough getting accustomed to commuting to school. With the subway (U-Bahn) it takes 45 minutes, and class starts at 9 am. We have language every day for three hours, plus a culture course on Mondays and Wednesdays. Additionally, my program offers a class on contemporary art, in which we go to a different museum each week and meet to discuss the art (in German) with the collector/docent. Even though I only understand about half of what is said, the exhibits are an amazing and stimulating experience to go to each week.

I quickly learn that for my other friends studying abroad, Berlin is a must-travel-to city. My friend studying in Copenhagen spontaneously booked a bus to Berlin one week, and I offered to have her stay over in my apartment. The next weekend my friend studying in Spain comes to stay with me, and this past weekend, my friend Gabby from Vassar who’s studying in Bologna came through. With all of these visits, I manage to see different things in the city. Together with my out-of-town friends, I’ve visited the East Side Gallery, a strip of the Berlin Wall that today features murals by various artists, the Jewish Museum, the Berlin Cathedral, the Holocaust Memorial and various other historical buildings and memorials.

Other highlights of my first month: through some interesting channels, I ended up meeting a group of other German students. Together with them and some of my other friends on the program, we played a German drinking game involving throwing a shoe at a beer bottle. If the bottle is knocked over, the opposing team has to drink as fast as possible in order to finish their alcohol before your team reclaims their shoe. I also have had dinner a few times with my host brother (? still not sure what to call him)’s family, and by the second time I was able to actually converse with them! Yay progress! My program also hooks us up with tickets to cultural events, so we’ve been to the opera and the symphony on many occasions. It could honestly not be more ideal for me.

Aaaand I think that about sums it up! I’m going to London this weekend—my first time traveling since being here, and I’m excited to get a glimpse into another European city. Tschau! (German spelling of “ciao”).