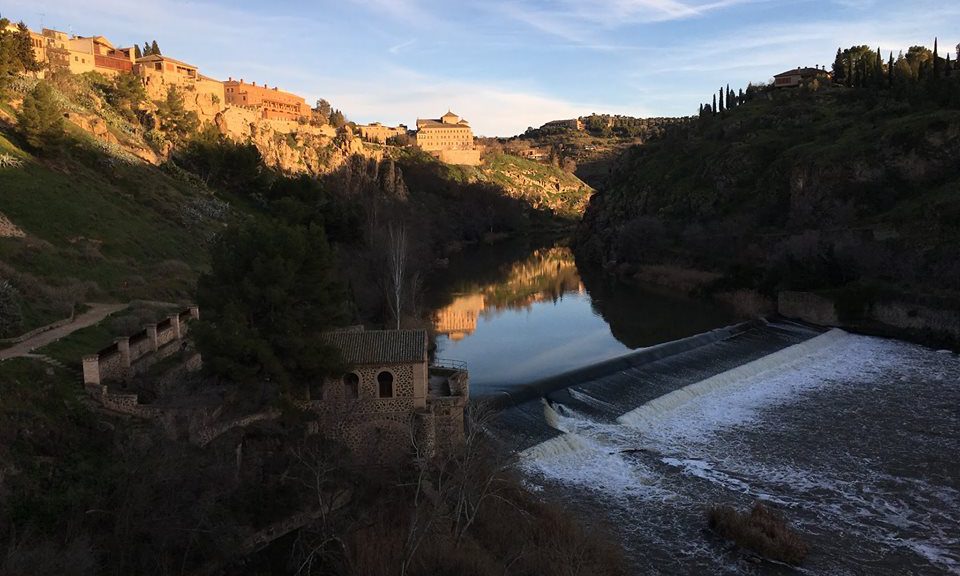 Ironically, I’m writing my first blog post about Spain while on my way back to the United States. The plane is almost empty—I guess not many people have to make a day-trip to Chicago—and it’s the perfect time to finally force myself to write this because I’m so sure nothing else exciting can happen before my deadline. Please God let me be right.

My creative writing professors told me not to start any piece of writing with a flashback, but in Spain all bets are off. Cue the harpist and start the wavy-screen, 90s-style flashback transition.

While many of the students in my program either grew up with Spanish or took like 80 AP courses in it, I started learning when I got to college. While they held full conversations with cashiers and waiters, I was mangling even the most basic colloquial phrases into flaming piles of linguistic garbage. Last semester, as I compulsively joked about probably dying while abroad, people would ask me, “If you’re so bad at Spanish, why are you going to Spain?” I will get back to you on that, as soon as I’m sure I’ve figured it out for myself.

For better or worse, I made it to Granada (after spending another seven hours in JFK because I can’t get enough of airports), not at all ready for 10 days of orientation, but accepting the fact that it was going to happen to me whether I wanted it to or not. As I powered through my first Never-ending Lunch in Granada, I realized that if social anxiety was an obstacle for me in English, it’d literally kill me in Spanish. Three hours later, I wasn’t dead, though if they brought out one more course, I might’ve been. For Spaniards, food and socializing go mano a mano. Okay, yes, I realize that’s kind of a thing everywhere, but it’s really a thing here. At Vassar, I try not to spend more than 30 minutes in the Deece (long enough to get an omelet and get out before I become one with the yellow walls). Here, meals last indefinitely.

Luckily, everyone in my program has been really patient with me as I articulate complex and though-provoking phrases such as “¿Dónde están los aseos?” and “qué guay.” But really, the other students are great, even if they think my self-deprecation is a cry for help. In that sense, nothing has changed since Vassar. I’m still surrounded by incredibly smart, sometimes intimidating, but genuinely wonderful groups of peers wherever I go. There is no escape.

Not that I [usually] wanted one. Granada is gorgeous. While I only caught like, 50 percent of what was said on the guided tours, the places we visited would be indescribable in any language. Granada is old. Like, really old. And you can really feel yourself moving through layers of history in each cobblestone street. The Alhambra was, of course, the highlight. It’s a fortress held by the Nasrid dynasty, the last Arab-Muslim one of Spain. After centuries of religious warfare, the Alhambra bears the weight of each transition of power. Now, the intricate Islamic art and sprawling gardens have been restored, but as I trailed after our guide (a vibrant professor named Mary Carmen), I felt the pull between Granada’s rich history and the tourism that dominates the Spanish economy. As an American student, a visitor, and, of course, a tourist myself, I tried not to take in these spaces at face value and even did some research in English after each tour to make sure I better understood their significances.

We also spent our mornings taking crash courses in language and history in the Centro de Lenguas Modernas, a branch of the Universidad de Granada, but our orientation wasn’t all academic. Los monitores, a group of older students paid to hang out with us, provided a quick rundown of the Spanish nightlife and formally introduced us to tapas, the most beautiful combination of wine and appetizers that you can imagine. The food has been amazing, but unfortunately, Spaniards are obsessed with two things (besides fútbol and walking really slowly): ham and fried food (although there’s surprisingly little bacon here). As someone in remission from Chron’s disease, there are two things that I absolutely cannot eat: ham and fried food. Ordering anything at a restaurant is a game of intestinal Russian roulette, but my friends have helped me double-check ingredients before I order. Plus I think I’ve learned all the different words for pork now, so we should be good.

Speaking of which, if you’re reading this and you’re a student with a chronic health condition preparing to study abroad, please for the love of Jesus, get your medicine in advance and bring it all with you on the plane. All of it. Apparently international customs isn’t super down with large quantities of auto-inject needles entering the country unsupervised and, if you have my luck, your insurance won’t cover your prescription outside the U.S.

This is what landed me on this plane to Chicago in the first place. If I want my intestines to keep working for the next four months, I have to fly back for a hot second, grab my medication in bulk and then drag my butt back across the Atlantic to Spain. It’s a huge pain, not to mention a financial burden, so learn from my mistakes, [email protected] Don’t worry. There are plenty more to come.