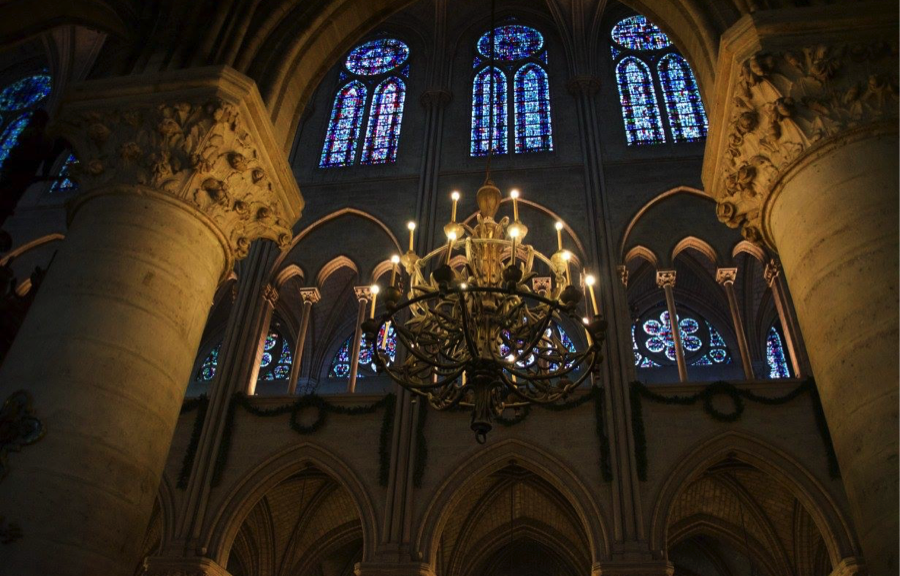 In between finding out that I had been accepted into the Vassar Wesleyan Program in Paris and actually arriving in France, there was about a year’s worth of build up. A year of telling family, friends, old high school teachers, priests, or basically anyone that my mom’s ever talked to for more than 45 seconds that I would be studying in Paris. It’s funny because when you have that much time to anticipate a whole chunk of your life that has been carefully set aside for your intellectual and cultural cultivation, the expectations start to pile up. By the end of it, I’m pretty sure my family—and myself to some extent—envisioned me traveling off to the city of lights with a steamer trunk, a feathered hat and a parasol—the true “Vassar Girl Abroad.”

Fast forward to this January. We’ve touched down in Paris and a fun combination of exhaustion and self-doubt has replaced the excitement that’s supposed to accompany the announcement, Ladies and Gentlemen, welcome to Paris. I’m also avoiding eye contact with the poor passenger next to me whose arm I may or may not have grabbed mid-flight in a turbulence-induced panic. Shuffling off the plane and through the bowels on Charles de Gaulle Airport, I don’t feel as though I’ve really “arrived.”

That feeling of displacement cements itself as I slough through my first few days, facing the unexpectedly biting Paris cold (weather.com lies) and the complete disappearance of the familiar yellow orb that normally floats in the sky. All parasol related imagery vanishes completely when on the last day of orientation—coincidentally the day that we’re going to move into our host stays—I find a thriving colony of ants in my suitcase, volcanically spewing from a box of chocolates I had brought for my new host family, milling about extent of my worldly possessions.

But now I’m a month in, the ants are gone (to my knowledge) and finally, I think Paris and I have come to an understanding. For me, the biggest learning curve was actually figuring out how to live in a city. On some primordial level, I believe my small-town, Midwestern instincts have been actively fighting against this change. Take for instance the seemingly simple process of “figuring out the metro.” For the average person, this means looking at a Paris metro map and understanding that there are multiple lines and that each line goes in two different directions. On my first attempt at taking the metro, I got stuck in between the turnstile and the push barrier and had to be forcibly extracted by an exasperated Parisian. From that point on, it took me essentially the entirety of January to become accustomed to the subtle art of getting on and off the metro (preferably at the right stop), as well as the glassy-eyed death stare of the Parisian commuter.

As a people, Parisians collectively have this air of “I know exactly where I’m going and exactly what I am going to do once I get there.” Even Parisian children seem to have this excess of purpose as they fly past you at alarmingly fast speeds on their possibly government mandated scooters (I have yet to see a Parisian child without one). There’s also a sort of Parisian uniform that includes a dark formal coat, a carefully draped scarf and a handbag/briefcase. Thus far I have managed the coat and scarf aspects, although my draping leaves something to be desired.

But that is a depiction of Parisians from afar. Up close, underneath the coat/scarf/bag ensemble, all the Parisians I’ve met have been exceptionally warm, funny individuals. This has especially been the case for my two hosts, Catherine and Thierry. The couple has been hosting students for the past ten years and they are exceptionally good at it. They handled my plague of insects like a couple of pros and have been amusedly guiding me through my Parisian trials ever since. Just last week they nursed me through a particularly bad cold, over the course of which I was brought salmon and toast points in bed and put through a rigorous set of thyme-infused steam inhalations. It was to date the fanciest period of ailment I have ever experienced and perhaps restored a bit of my Vassar Girl Abroad fantasy.

In a way, that’s been the theme of my past week or two here, that is the “restoration” of my faith in Paris. Slowly but surely, I’ve been re-inflating the balloon inside me labeled “Rachel’s Super High Expectations/Longstanding Paris Dreams.” Finally, it’s warm enough for me to wear my J.Crew Factory Warehouse Outlet pea coat (the height of true elegance) and stroll about the city with some concept of where exactly I’m going. For all of my griping about Paris being mean to me and my asthmatic bird lungs, I’m incredibly lucky to be here and every day my resolve to go out and just be in Paris grows stronger. The other day, I decided on a whim to track down this illustrious falafel place that I had read about and after a delicious, but somewhat regrettable lunch of 14 falafels, I just walked around the Marais and then over to the Notre Dame. No pictures, no map reading, just enjoying the view from across the river, trying my very best to not look like a tourist.

Settling in somewhere new is never easy, but gradually I’m filling up my little bulletin board with opera and museum tickets, my notebooks with frantically scribbled notes in Frenglish, and my coin purse with little five centime coins that I seem to be incapable of spending. I’ve had art class at the Centre Pompidou, theatre class at the Comedie Français, and have accidentally followed my Nouvelle Sorbonne literature professor into the bathroom. If anything, at this point I’ve graduated to at least “entry-level Parisian” status and as long as I keep working on my scarf draping, I think I’ll be ok.