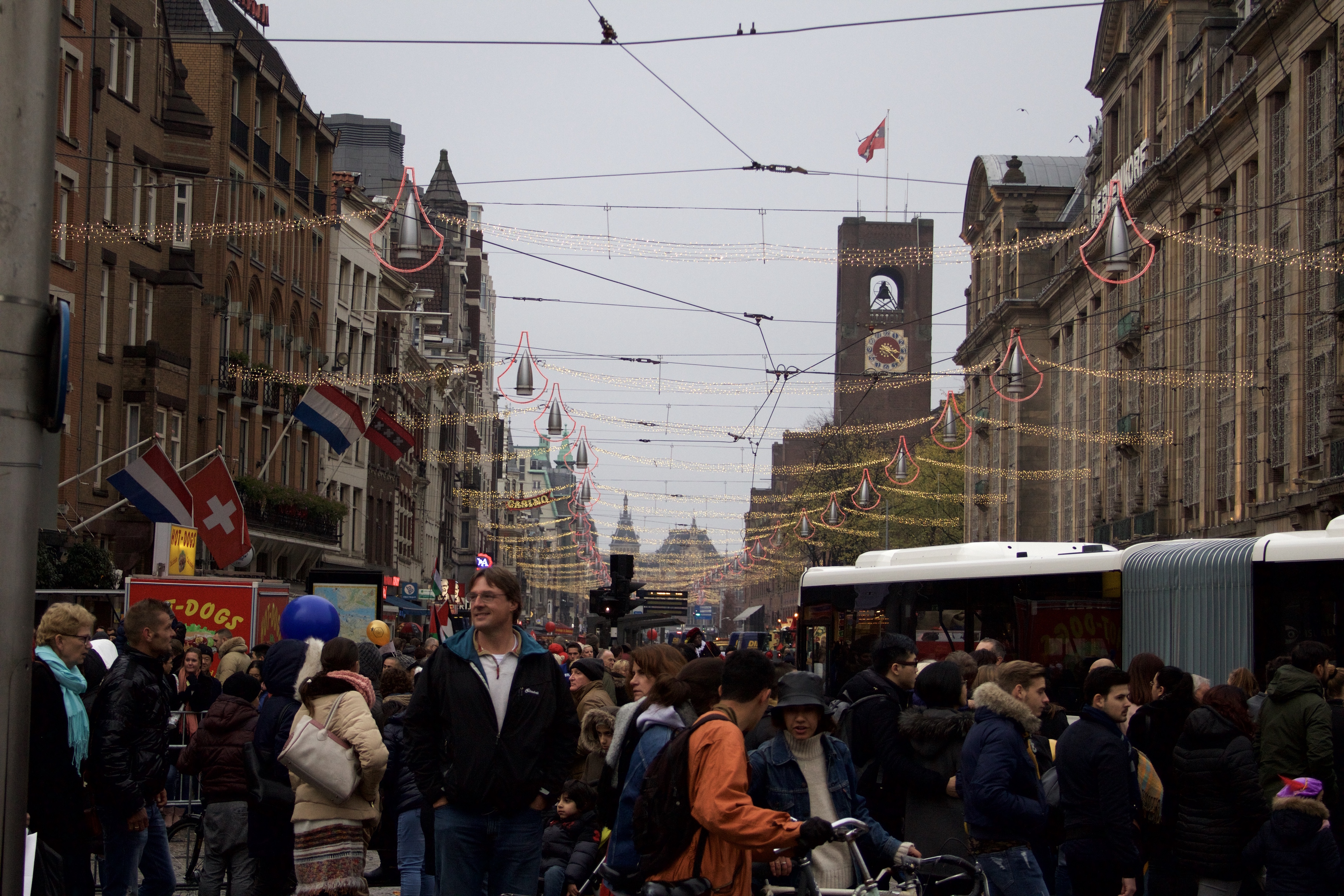 In the Netherlands, December 5th is a much more important date than the 25th. That’s because the 5th is Sinterklaasdag (Sinterklaas Day), which is more widely celebrated here than Christmas. According to lore, Sinterklaas is a royal-looking elderly fellow with a huge white beard, dressed in red and white. He carries a large staff and rides around on horseback, always leaving Spain and arriving in the Netherlands in early November. The traditional story is he freed a Moroccan slave named Piet, who travels with him as a helper, listening at windows and keyholes to see which children have been good as well as slipping down the chimney to deliver presents. This role is generally performed by a host of men and women dressed in colorful pageantry and blackface, in plural known as Zwarte Pieten.

Upon arriving in Amsterdam, the program I’m with gave a briefing on cultural conflicts American students might encounter here, and then again in mid-October they sent out an email regarding Sinterklaas and Zwarte Piet (Black Pete). Despite these notices, I don’t interact with many young children here and heard very little about Sinterklaasdag in the weeks leading up to it. The only other news was emailed notifications about coming anti-Zwarte Piet protests in Utrecht, Rotterdam, and the Hague—part of the annual cycle of public outcry against the celebration of a figure in blackface. The anti-Piet protests first gained major media traction about a decade ago, and every year since there has been a continuous conflict about the role and depiction of Zwarte Piet. The first changes to be made were to remove the gold hoop earrings and bright red lipstick that were traditionally part of the costume, though most Pieten still wear afro-like wigs. There has been a movement toward making the Pieten different colors, and a variety of rainbow faces have replaced the standard black face paint in recent Sinterklaas celebrations. This year, one of the main Sinterklaas specials on television opted to use a smear of charcoal instead of complete blackface, which was considered a major step.

On November 6th I was playing cards in a friend’s room, when we noticed there was a crowd of children outside with lanterns, running from one apartment building to the next. For several hours, small children trick-or-treated from tables that had been set up on a route, picking up small gingerbread cookies (kruidnoten) that are traditional Dutch holiday treats—something we hadn’t seen the previous weekend of Halloween. This was the intocht van sinterklaas, a celebration of Sinterklaas’s arrival in the Netherlands. He wouldn’t be arriving in Amsterdam until five days later, since he arrives by boat in a designated coastal town and generally takes the train throughout the country.

On November 11th, several American friends and I biked to Dam Square, where the Sinterklaas celebration was taking place. We were all fairly nervous about what we were going to see after months of being prepped for it. In front of the Royal Palace was a tall tower structure spewing fog, meant to represent the chimney that Zwarte Piet would climb down. Two Pieten swung around the top of the tower, watching over and calling out to the crowd below. The parade route snaked around the square, and the metal rails constraining the crowd were bending inward with the weight of children standing on them, reaching out for the kruidnoten and sweets that the Pieten were handing out. The smaller children rode on shoulders so they could see and wave at the performers passing by. There was a stronger police presence than I’ve seen anywhere in Amsterdam before, watching from raised platforms and wandering through the crowd. Though I was tense already from the uncomfortable situation we were walking into, the police were laughing and joking with the crowd, obviously there to enjoy the show as well. 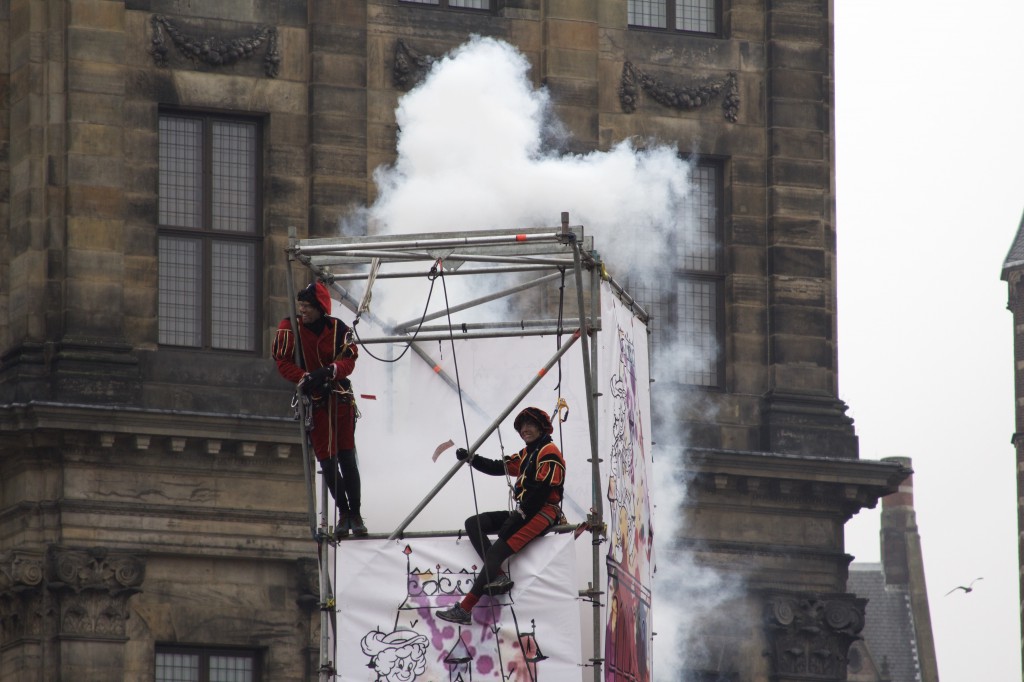 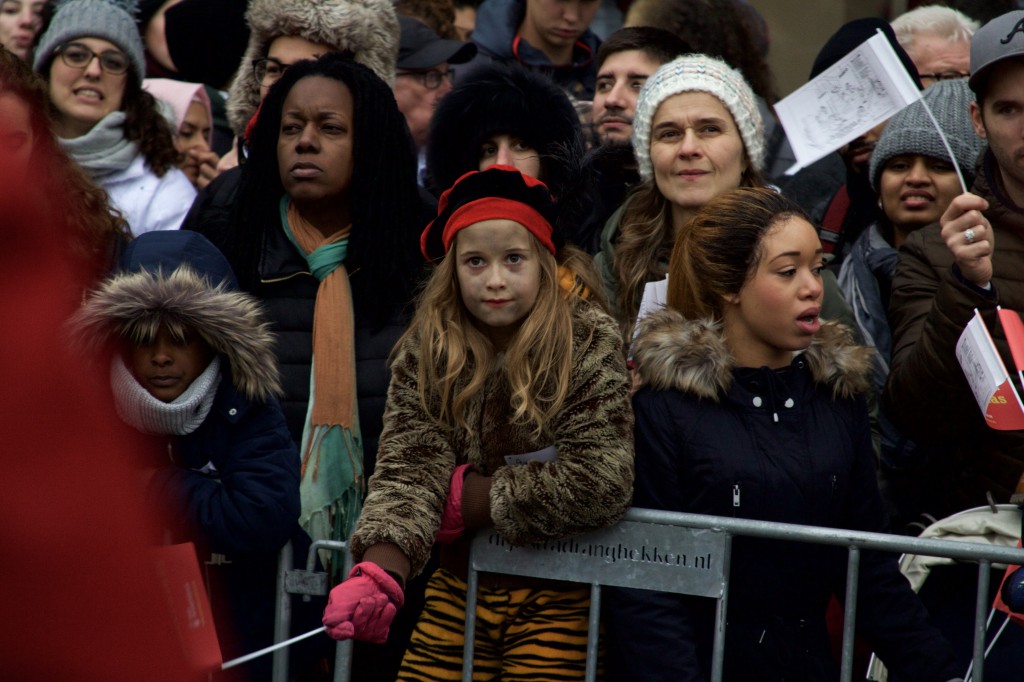 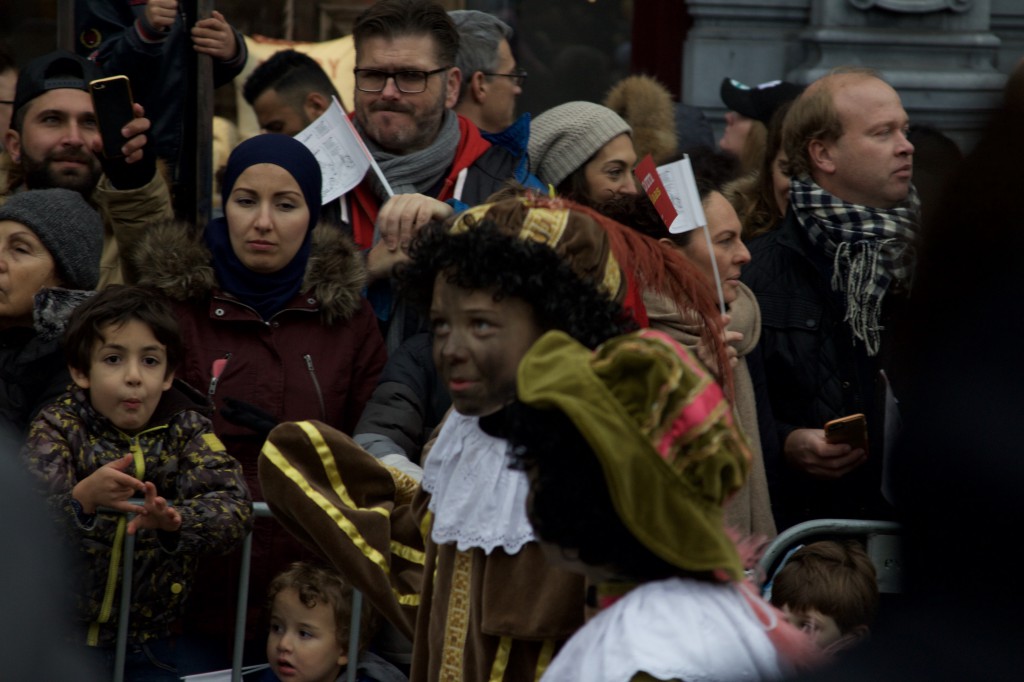 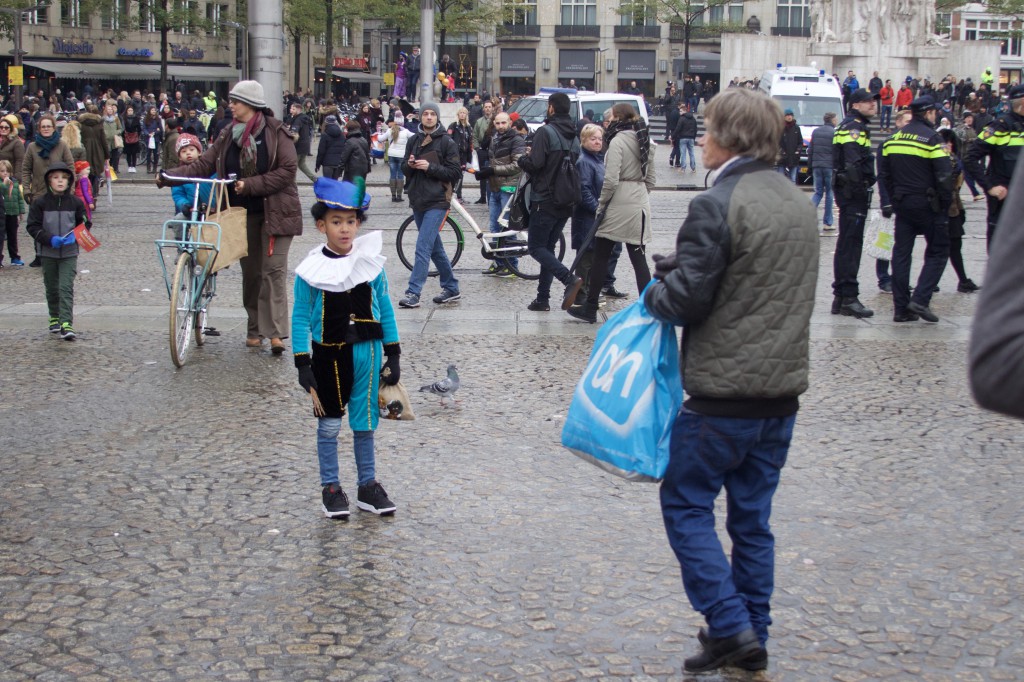 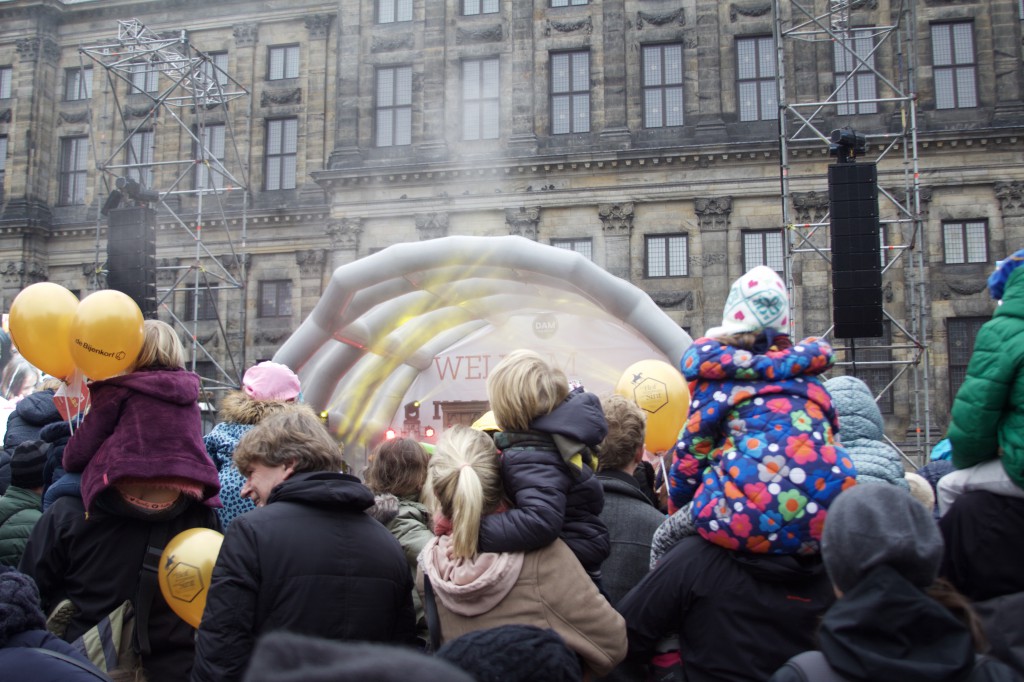 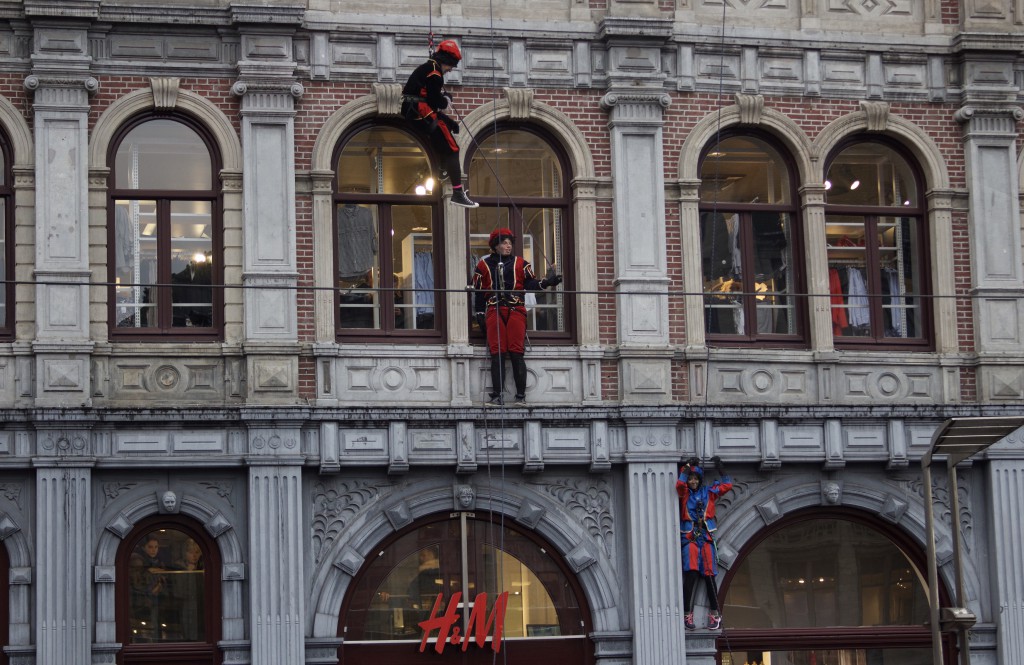 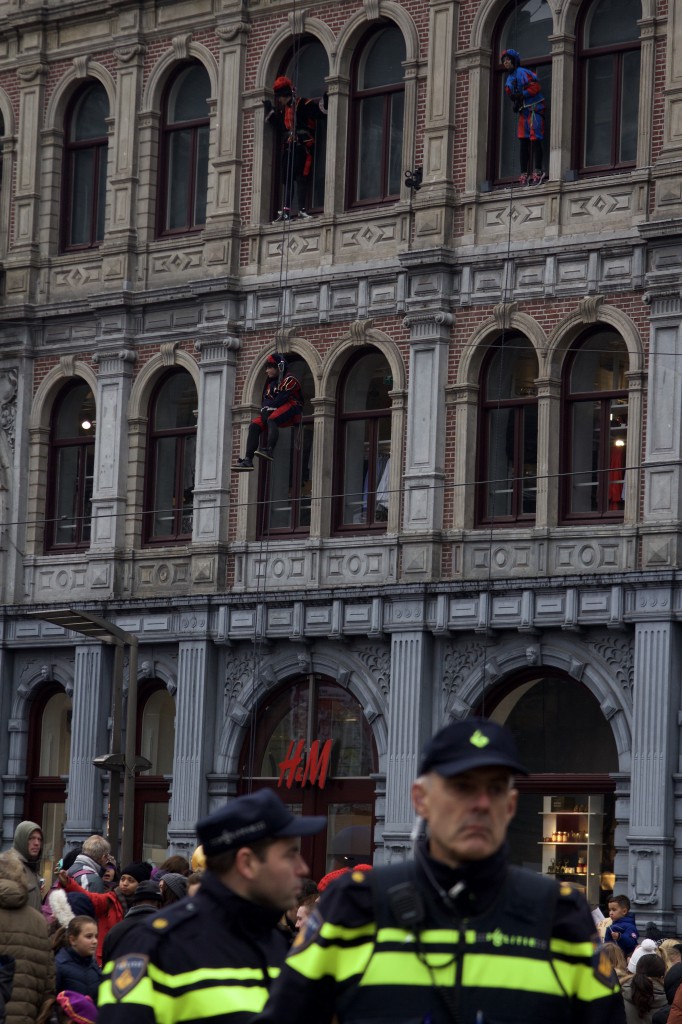 On a stage under the palace were two young hosts introducing the various carts of Pieten that went by, most pulled by horses or tractors. The hosts seemed to be some kind of media personality, but since their Dutch was fast and punctuated with frequent outbursts of singing, we had no idea who they were. When we first arrived, the parade had seemed to just be starting, but by the time we walked into the centre of the square there were Pieten everywhere — hanging off of the buildings around us, walking through the crowd on stilts, biking and skipping through the parade route and leaning off the side of floats. They were of all ages, but seemed to be exclusively Caucasian. The crowd too seemed primarily white, but there were also a number of non-white children calling out to the children as their parents stood by, some dressed in costume. The Pieten, following the new standard, were dusted with charcoal rather than fully painted, but some seemed to have tried to cover their whole faces anyway. It was deeply unsettling to watch the casualness of this mummery, and the way in which children had their cheeks liberally daubed with charcoal. Despite the clear enjoyment of the crowd, the whole experience was disturbing to me, as someone who has been taught that this kind of celebration was antiquated and inherently racist. 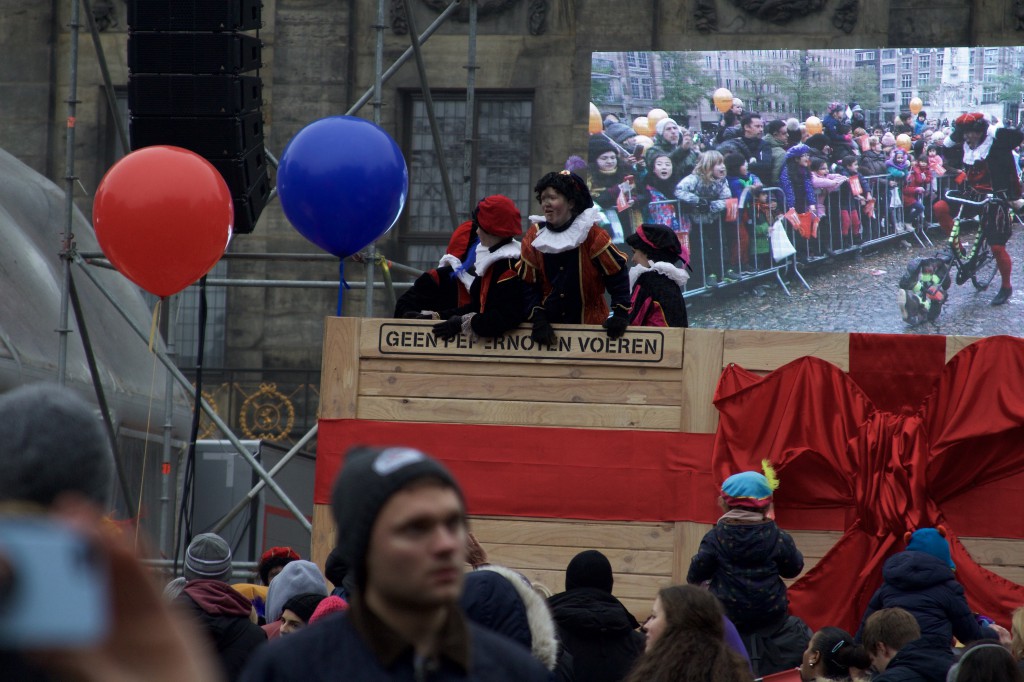 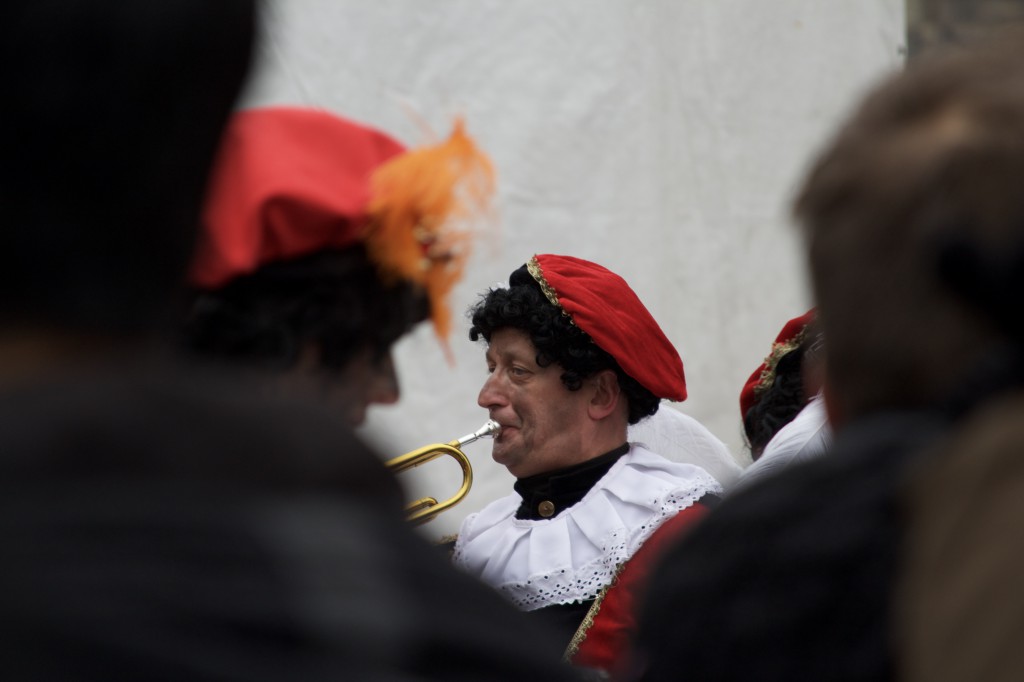 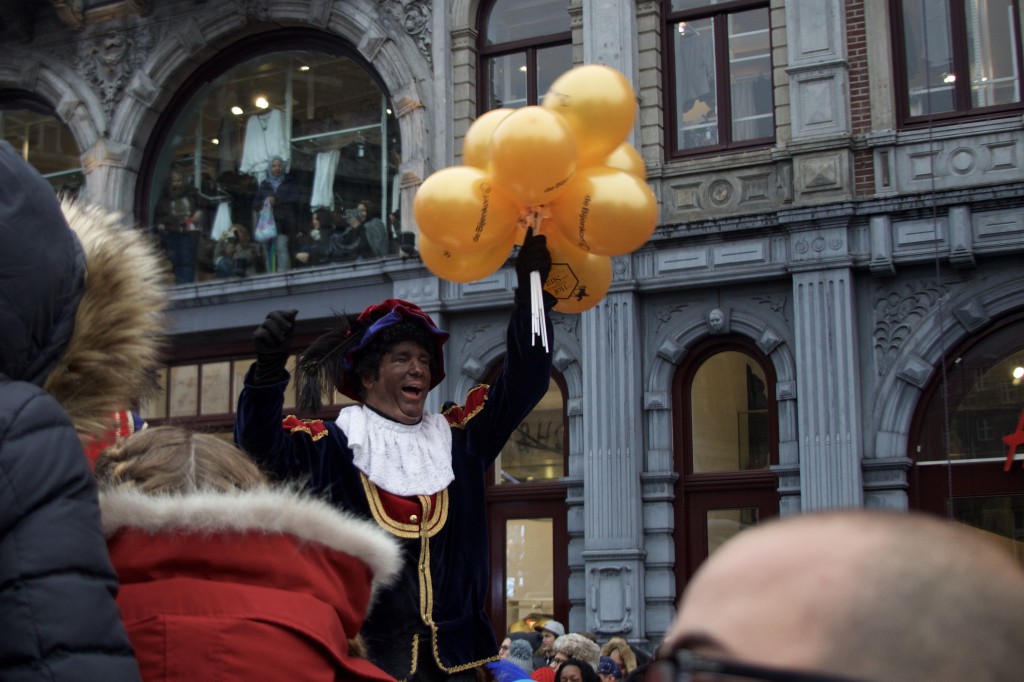 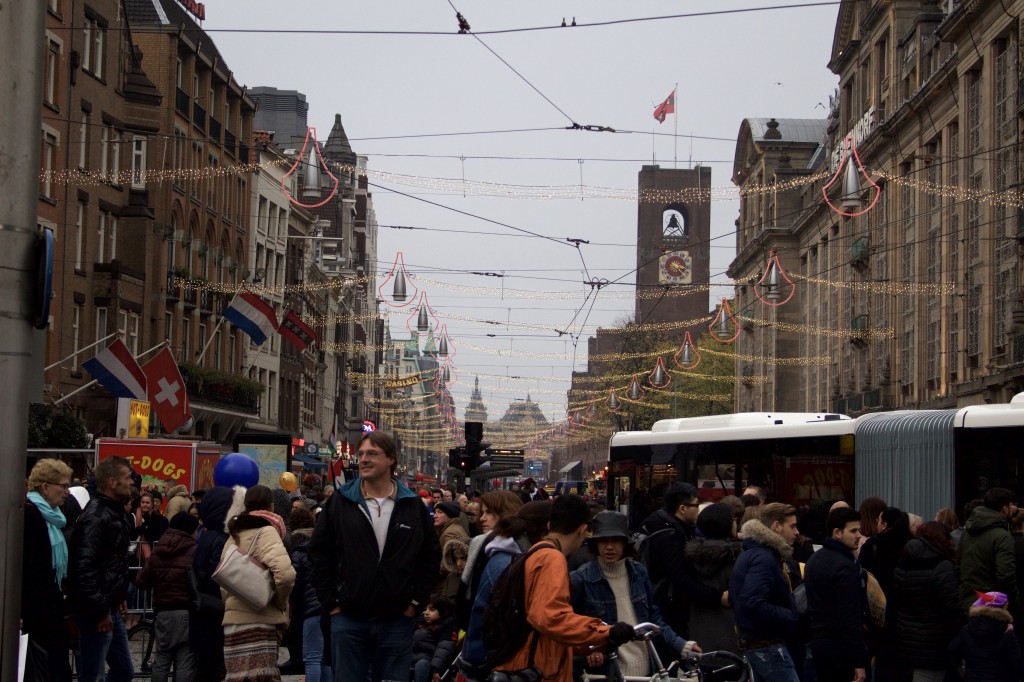 Right before Sinterklaas’s white steed trotted onto the square, the first group of protestors appeared in the middle of the crowd. There were only about twelve at first, mostly black and Dutch quietly holding signs and videotaping the crowd. After some time they were joined by a number of other people, seemingly to have come right out of the crowd—but the group was still no more than twenty-five, but more racially mixed than before. The police had moved directly into the crowd at this point, circling the protestors in pairs while a captain stood next to them, looking outward into the crowd. As Sinterklaas appeared in the square the whole crowd moved toward the palace and the protestors were lost in the swell as children began to scream. Sinterklaas, like a celebrity greeting his fans, waved and leaned down to pat the heads of children along the way. He trotted off the route behind the stage and appeared a couple moments later, carried by several Pieten into a throne onstage. A series of holiday songs were sung, that everyone around us seemed to know, and the event dragged to an end. Done with the spectacle, my friends and I retreated to our bikes and made our way out of the dispersing crowd, in disbelief of what we had just witnessed. 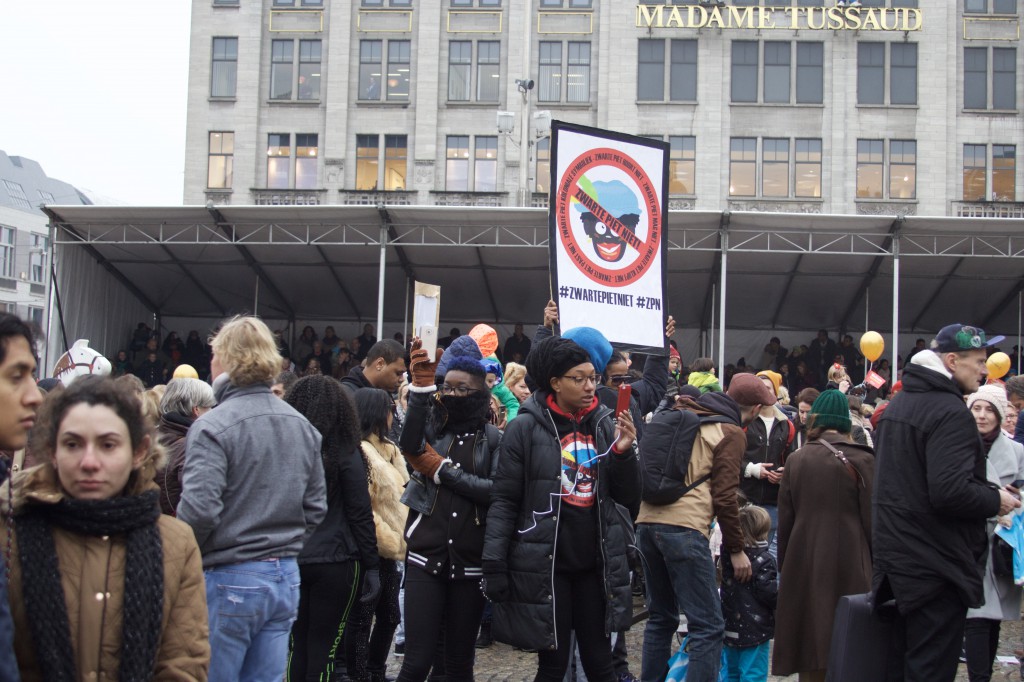 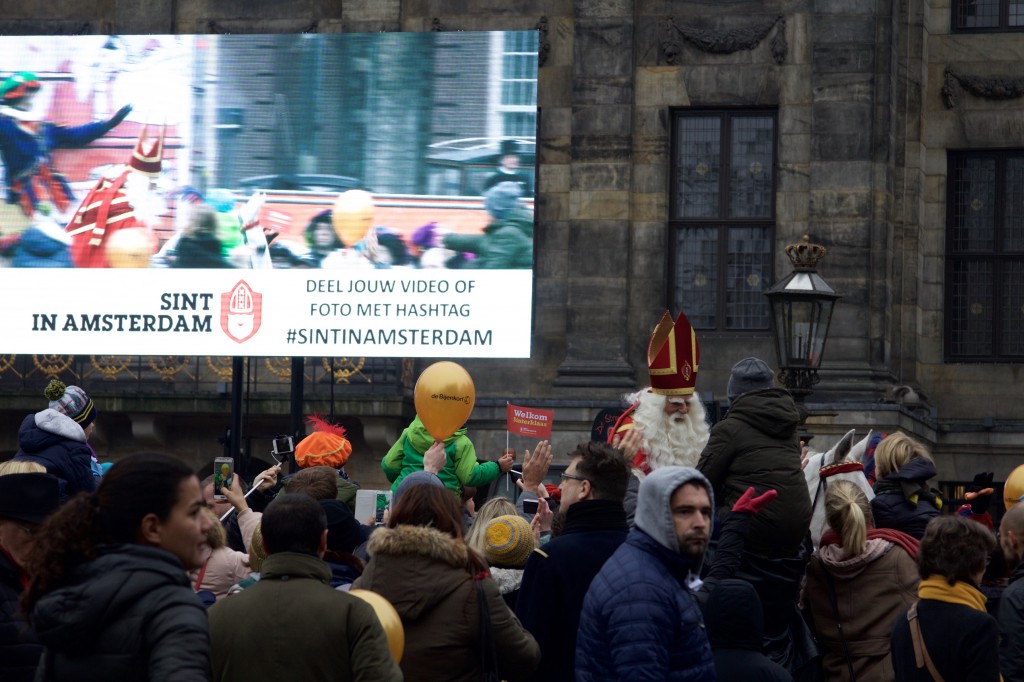