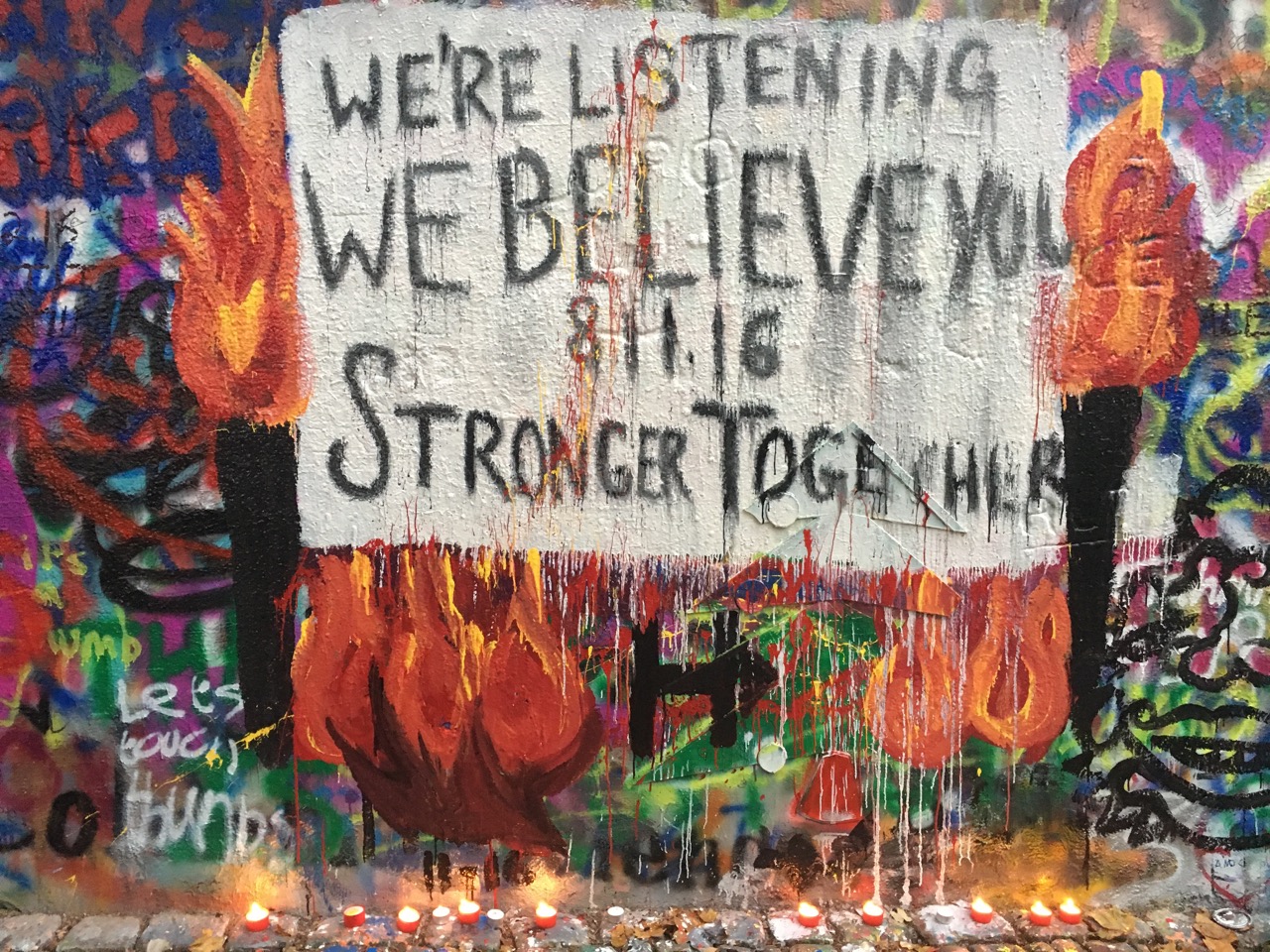 Snow is not only one of my absolute favorite things, it’s my middle name. It’s my mom’s middle name, too, and the middle name I’ve always wanted to give to any future daughter I might have. Whenever it snows it feels a little bit like it’s a present just for me. It’s not just snowing—it’s Kayla Snowing. Every night this week Prague has been dusted with snow. Four days ago was the holiday celebrating the first snow, and on that day the whole city woke up to a powdered sugar coating. This is supposed to be lucky. This morning most of the snow has given way to leaves crunchy with ice and surfaces hardened with cold glass. As I walked from my apartment to my bus stop today I saw that in the remnants of the snow, my present, my favorite thing, someone had drawn a swastika.

Later this week the Czech Republic and Slovakia will both celebrate Struggle for Freedom and Democracy Day. It commemorates the 1939 student protests against the then-incoming Nazi regime. After this day of protest, the Nazis executed nine students and closed all Czechoslovak universities for several years. Hitler would later consider the extermination of Czech Jews one of his biggest “successes”—next to no Jews survived here.

The U.S. election was called at about 7 a.m. Czech time. I had been awake for a full day at that point and had been home for about three hours after the smell of cigarettes and the cheers of people playing election drinking games had become too much to handle in the bar where I was watching the election outcome look more and more dire. My friends and I had sat in a circle sipping wine and writing poetry until we couldn’t anymore. As soon as the result was called, my friend Amy and I bolted from our houses. We sat in a cafe known for funky decor and good espresso and our new political reality started to sink in. Over plates of omelettes we both start to cry. Overcome with fear and desperation, we begin to sob into delicately prepared eggs and lattes with milk hearts drawn on top. Our waiter comes by to worriedly ask if the food is okay.

On the fiftieth anniversary of the 1939 student demonstrations, thousands of students took to the streets in Prague to protest the Communist regime that was then oppressing millions across Eastern Europe. This day of protest kicked off the Velvet Revolution in Czechoslovakia—the peaceful overthrow of Communism. Students and artists together brought democracy to the country. There is now a plaque where the students started their march. In Czech it reads, “If not us, who? If not now, when?”

The guiding paradigm of my program is that art can change the world, that it already has. Being abroad watching the results of the election unfurl in all their violent white supremacist, bigoted horror has filled me, and most students here that I’ve talked to, with a clammy sense of heartbroken impotence. This weekend some of the students on this program took to one of the most tourist-ridden spots in Prague to put into practice what we’ve been learning about art for healing and social change. We spent all day at the John Lennon Peace Wall creating a mural whose message was maybe to the world, maybe to those hurting, maybe to ourselves. As we painted, countless strangers from around the world came to help us, to tell us how they were feeling, or to light candles. At the beginning of the day we felt silly, irrelevant and caught in a tourist trap. By the end we felt a little more whole. Our art wasn’t going to make anyone safer or cause policy action, but it reminded us that there is an international community grieving and fighting with us. We’re just getting started and we really are stronger together.

Two days after the election my Czech teacher told me how terrified she is. She remarked that for those who grew up under Czechoslovak Communism, the U.S. was the great white hope that democracy can work. Now she’s not so sure. Struggle for Freedom and Democracy Day in recent years has once again held student protests. This year the protests will be against the Czech president, who many Czechs have compared to Trump for his racism and xenophobia, and against the unwillingness of the Czech government to accept Syrian refugees. These causes are rooted in the same white supremacy and hatred that burns in the U.S., that incited Brexit, and that festers in Germany and France.

The week that will hold the 2017 U.S. presidential inauguration is called Jan Palach’s Week here. On this week in 1969, right after the Soviet takeover of Czecoslovakia, Palach, then a student in Prague, lit himself on fire in public after his other attempts at drawing attention from the regime failed. He was hospitalized and died a few days later. His funeral served as a widescale protest against the censorship and oppression of the regime. In the following days another student followed suit and lit himself on fire. He died immediately. These protestors have become a symbol of revolution, specifically student revolution, in the Czech Republic. They’re called torches.

As he walked to the spot where he would self-immolate, Palach dropped a series of letters in post boxes that would be opened in the coming days. In his letter to the Union of Czechoslovak Writers he wrote, “Given the fact that our nations are on the verge of desperation and resignation, we have decided to express our protest and stir the sleeping conscience of the nation.”

From my momentary haven from American politics in Prague I get near-constant updates on the dancing of the fires back home and I’m reminded that we’re living a story that has been told before.