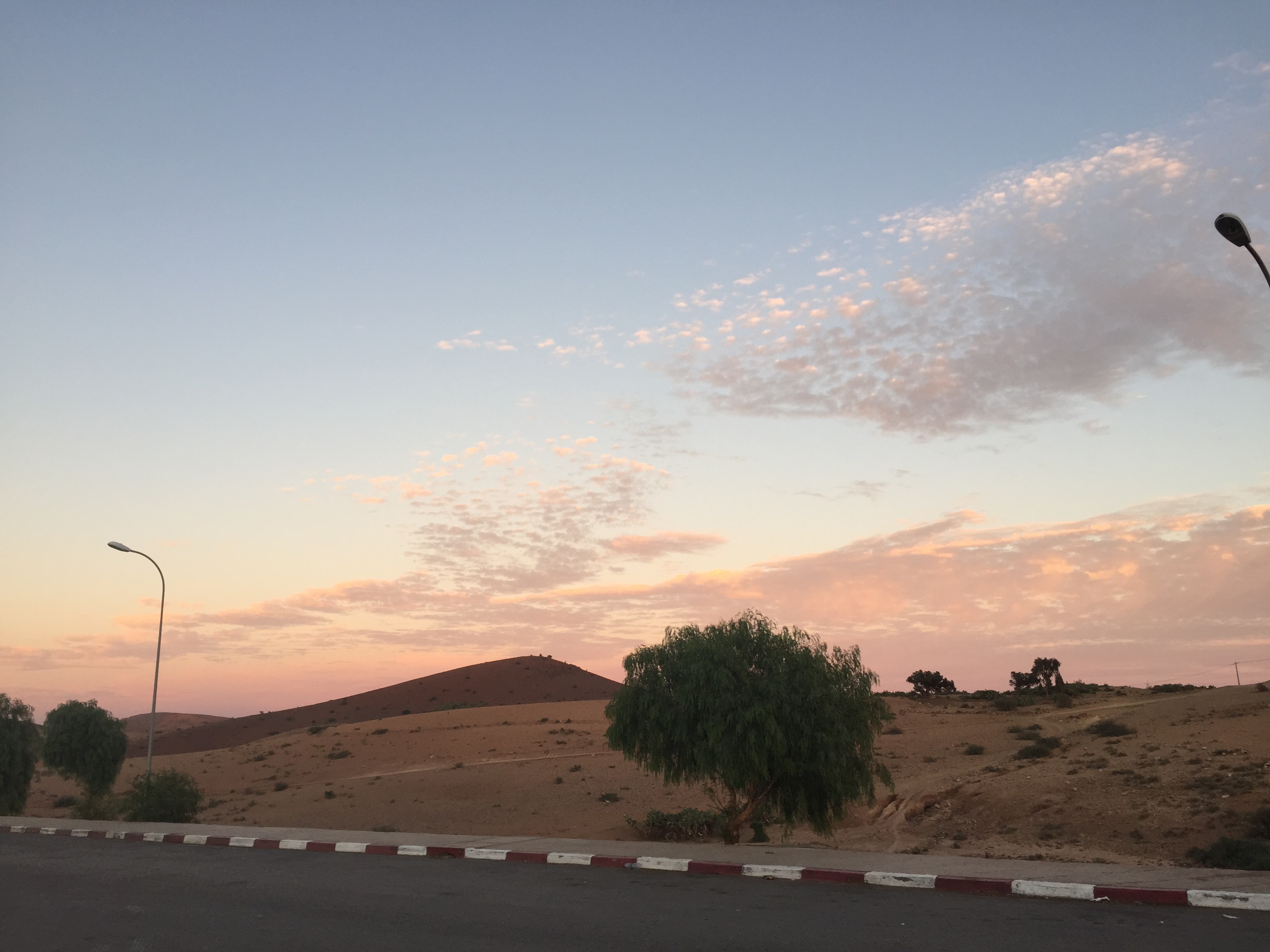 Well, it’s certainly been an eventful two weeks since the last time I wrote! As planned, our group ventured on Sunday the 6th from Marrakech to Agadir, a beach town on the coast of Morocco. While driving around trying to find our hotel, I joked that we should stay at a pizzeria I could see out the window; our van promptly turned left into the parking lot of the pizzeria, which was in fact the restaurant section of our hotel. Our stay in Agadir was very relaxing and enjoyable (at least until election night); I got the chance to play more soccer on the beach with our bus drivers, program staff and fellow students while the sun set, which was definitely an unforgettable memory. We visited a fruit packaging plant to see how fruits are prepared for export to Europe; though this doesn’t necessarily sound that interesting, it was super cool to see all of the machinery for shorting and I’ve never seen so many tomatoes in my entire life. Agadir is also home to a collective/collaborative space for youth called the CONNECT institute, and our group joined the college-age youth there for an afternoon of hanging out and talking about our studies, followed by an open mic session. The one member of our group who can actually sing had taken the afternoon off, so we were thoroughly outshone by our superbly talented Moroccan counterparts, but it was a ton of fun nonetheless.

Funnily enough, the most defining aspect of our Agadir visit was certainly the U.S. elections. Due to the time difference, the election results were due to come in starting at 12 A.M. Morocco time on the 9th, and the election was predicted to be called around 5 or 6 A.M. A decent portion of my abroad group decided to stay up and watch CNN’s coverage online, equipped with fries, mentos, water and not nearly enough coffee. Needless to say, it was not a particularly enjoyable night for us. I slept for an hour on the floor when I grew tired of swing states turning red, and awoke to a group stunned by disbelief and slowly beginning to accept the likely result of the election. At 6 A.M., our professor and some students, myself included, walked to the beach to watch the sun rise. As we stuck our toes in the sand and tried to comprehend what a Trump presidency would mean for our loved ones back home and climate change (the focus of my abroad program), the sun’s light was mostly diffused behind clouds and we were pestered by a stray dog; go figure. The election results presented me with the biggest challenge of my abroad program so far, because I felt as though I couldn’t be present as a source of love and support for the people I care about at Vassar and at home. In a very weird way, the fears for the future that came along with the election results made me feel even more connected to my country and the people there. However, I couldn’t be more thankful for the mutual support of my abroad group, students and staff alike; though the election made me really miss being in my communities in the US, it also made me appreciate more deeply my community abroad.

After returning to Marrakech, we had the opportunity to visit COP 22 for a few days. COP stands for Conference of Parties, and it is the international forum for climate change negotiations; the 22nd iteration was being held in Marrakech at the same time we were staying there. Though we of course had no stake in the negotiations, we were able to attend a bunch of fascinating lectures and discussions and see different people’s ideas for combating and dealing with climate change. I also visited the main square in Marrakech, which was an almost overwhelming whirlwind of activity. After grabbing an incredibly delicious and cheap burrito, I ventured further into the maze of shops off of the square to try and find some final souvenirs to remember my time in Morocco!

After packing our bags at our hotel in Marrakech (turns out it was a German hotel that we got rooms at because all of the other hotels were booked solid), we drove up to Casablanca to complete our circular tour of the country. Most of our time in Casablanca was spent debriefing and saying goodbye to the Morocco country staff, which was actually really sad because we had grown so close over the past month. The next country on our list was Bolivia, but we flew to Madrid from Casablanca since there are no flights directly from Morocco to Bolivia. We had a one-day layover in Madrid before our flight left for La Paz, but were confined to our hotel due to the lack of support staff in Spain. It was certainly a bummer to not be able to explore Madrid, but our hotel was absolutely massive (the largest in Europe apparently) so we had plenty to keep ourselves occupied with, along with a ton of work due before our flight. The next day we finally boarded our plane to Bogota, Colombia, with a connecting flight to La Paz in Bolivia, which is one of the highest cities in the world elevation-wise. I watched four movies on the first leg and slept on the second leg, and our group finally staggered into our hotel in La Paz at 4 in the morning and fell straight to bed. I woke the next morning to discover that our hotel had pancakes, which certainly made for a great start to the day! Though the last couple weeks have been a crazy time, I’m looking forward to the last month of my abroad experience in Bolivia, which is probably the most visually arresting place we’ve been so far. The next blog post will be my last, so definitely check in for pictures of Lake Titicaca and the Andes mountains as well as some reminiscing and reflecting on this wild ride.