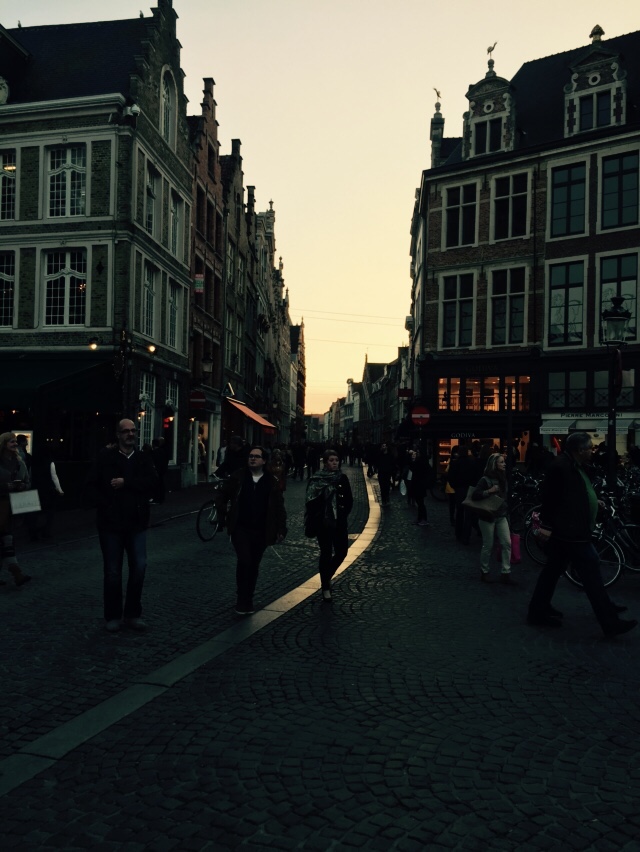 Election night hurt. I’m sorry that that’s the first thing I’m writing about, but it’s consuming the world I live in, both here in London and back home. Because of the time differences, it wasn’t until 5 a.m. that I fully knew the results. I pulled an all-nighter because originally I’d anticipated celebrating Clinton’s win, only to slowly watch it whither away in a tumult of fear and dread. Being a straight white male, there’s little I have to be afraid of, but for the many of my friends, who Trump’s angry rhetoric was attacking, this is a nightmare. One of my best friends identifies as agender and couldn’t even leave their room on Wednesday, their birthday too. It hurt to see them hurt but also that I wasn’t there to help them through. Now more than ever, we need to be there for each other. No matter the distance, say to someone you’re there and it’s alright.

To get our minds off of the election, we had our mid-semester break the week before. I traveled to Bruges, Paris and Barcelona. Bruges was a magical Christmas village with several chocolate stores and waffle shops on each street. It was sheer beauty, a city preserved in the 15th century. My B&B overlooked the canals, so I could enjoy breakfast and see the ducks float in the water. Brick streets were all over, reminiscent of the ones I grew up with in the suburbs of Chicago.

The one downside was my sudden realization that they spoke Flemish, essentially Dutch, in northern Belgium. Way back in high school, I took French and learned about the differing French-speaking nations. There was France, obviously, Senegal and Belgium. What I didn’t take away from that day was that Belgium speaks French, as well as German and Dutch, depending on the region. I was in the Dutch region, much to my confusion. Luckily, most people spoke English, and I got by with few altercations. Among the great places I visited, there was the belfry, and all the 366 steps that came with it, the Church of Christ’s Blood (which was quite creepy), and the Groeningemuseum, which had a great amount of Jan Van Eyck paintings. It was also a fairly cheap trip. In 2.5 days, I spent around 50 euros, not including the hotel, to see all the museums and eat good meals.

My next stop was Paris. I took a train to Brussels and then from there to Gare du Nord Station in Paris. Let me just say, I love trains. During the trip between Brussels and Paris, I got the chance to see the sun set over the hills, creating a purple-orange hue over the countryside. It was beautiful. Simply beautiful.

In Paris, I went museum-hopping. First, the Musee D’Orsay. This is probably my favorite museum in Europe, not just because of my personal preference for Impressionist paintings, but because it used to be a train station. There’s even a giant clock you can look through to see the Seine. Later that night, I decided to see some French theatre. The production was Dom Juan by Moliere at The Odéon-Théâtre de l’Europe. Even though I was relying on the little French I remembered from high school, this show, despite being dialogue-heavy, didn’t require that. The characters were so animated and distinct that it was clear to understand what they’re saying. It was bizarre though, as an understatement. The set fell apart at least three times, a scoreboard marked each time the word ‘ciel’ was said (68 times), and then one character went nude and sang ‘Sexual Healing’ by Marvin Gaye, eventually floating away to Hell. It was a show. Quite a show.

In the middle of the night, I had a shock. The Cubs finally won. There’s little to say but nevertheless, it was an emotional experience to hear about from my family at five in the morning. My brother had the chance to go to Game 4 at Wrigley Field and, while I get the benefit of traveling around Europe, I’m still jealous of him for that.

The next day in Paris, I went to the Louvre, checking out the greatest hits of classical art: Mona Lisa, Venus de Milo, The Coronation of Napoleon, Winged Victory, The Raft of the Medusa and Liberty Leading the People. Art history students should recognize these names. Later, I walked around the Tuileries, a beautiful place to get lost in. The last museum of the day was L’Orangerie, conveniently located in the Tuileries. I’ve been to Paris and the other museums before, but it’s so easy to forget this one. This time, I’m glad I didn’t. I adore Monet. I’ve been to Giverny and dressed up as him once for my French class. This museum has Nymphéas, better known as Water Lilies. The painting is quite colossal, stretching all around two separate rooms in an oval shape. I could sit there for days and take in all the wonder and brilliance of it. Sadly, I didn’t. Instead, I got dinner next to the Sorbonne and visited Shakespeare and Company, one of the best bookstores in the world. While their collection isn’t too broad, the history behind this bookstore tantalizes any literary buff. This is the location of Joyce, Hemingway, Fitzgerald, Stein (no relation), Nïn, the hub of the Lost Generation. They also have a larger poetry collection than I’ve ever seen.

The next day, I took a train from Paris to Barcelona. It was six hours and worth each second. Starting off in the French countryside, it slowly transitioned to golden fields of crops and mustard seeds, then to hedgerows and forestry, then sandy beaches and beautiful oceans, forming into the cascading mountains of the Pyrenees, finally settling into the grassy slopes of Catalonia. For a second, I thought I was somewhere in South America. The city itself was like a tropical Paris. I stayed on La Rambla, the famous street, for its history and pickpockets. When I got there, it was evening, so I walked around, ate some tapas and delighted myself in some Catalonian wine. The next day, I took a tour of the Gothic quarter. I passed grand Cathedrals and remnants of the Spanish Civil War. I also saw the brilliant architecture of Antoni Gaudi. He made this city his. The magnum opus on which he spent the last 20 years is the Sagrada Família, which is still in construction over 100 years after his death. It’s breathtaking. Simply breathtaking. So colossal in height and design.

The next day, I visited the Picasso Museum, indulging in his bent shapes and cloud-like pigeons. I liked it, especially his Blue Period. I also attempted to see some theatre in Barcelona, which doesn’t have much to offer. They are big on music and dance, however. In the end, I saw a musical version of Scaramouche. In short, I don’t think they got the rights for Les Mis and instead got this one. It’s essentially Disney does the French Revolution. I wasn’t a fan. The next day, I left still in good spirits back to London, the end of a necessary break, into rehearsals for my show, Macbeth. I’ll be playing the Porter and the ukulele, so we’ll see how that goes.