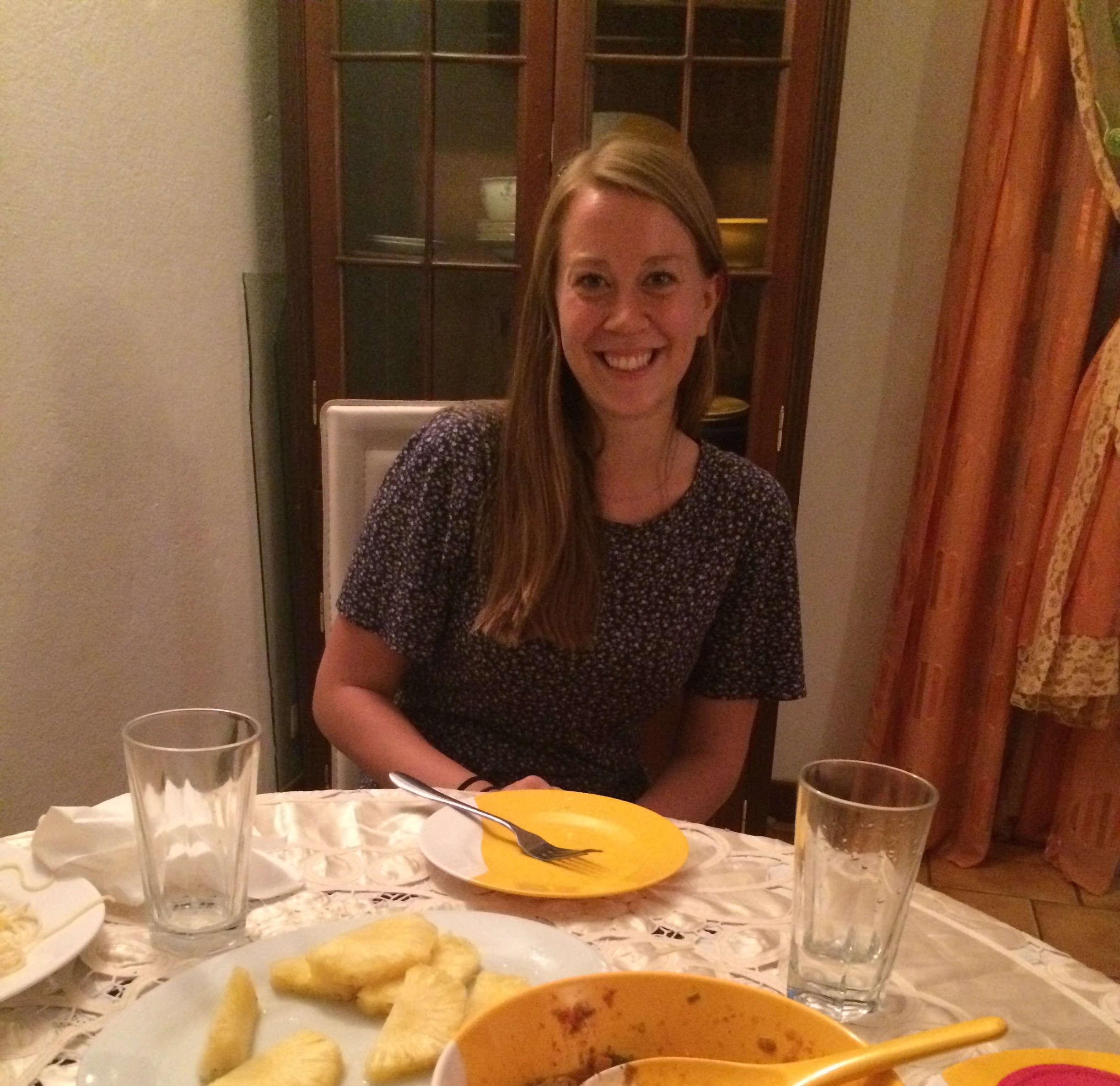 Throughout the past two and a half months, I’ve been confronted by many cultural differences in Cameroon that are hard to get used to. One of these is the clear patriarchy in my household and the fact that I’ve never once seen my host dad cook or clean dishes. As frustrating as it is, I also understand how that’s more accepted here. However, there is one difference that continues to baffle me everyday, and that is meal times.

Meals have been such a confusing part of my life with my homestay family that even now I go through a daily struggle to figure out when, what and where I should eat.

Let’s start with a normal day with my Yaounde host family:

Typically I get home around 6:00, and at this point, I never know if anyone has eaten. There’s usually food on the stove because my host mom or host sister cooks a whole meal in the morning before work, and then it sits on the stove all day. So around 7:00 or 7:30 I’ll wander into the kitchen and see what they’ve made. I then put it in the microwave and go eat by myself in the dining room. Don’t get me wrong, it’s not like I’m home alone. Everyone is at the house, but we don’t eat together in the way I’m used to. Sometimes we will eat at the same time in the same room, but not at the table together, and there’s no dinner conversation.

Cameroonians have a saying: “On est ensemble.” This means that even if you aren’t physically together, you’re together in spirit.

Sometimes I’ll ask the kids if they’ve eaten, and they say yes. But later when I’m serving myself dinner they’ll tell me they’re hungry and I have no idea what to do. Then the mom comes in and serves them the same meal I’m having. So then they hadn’t eaten? Sometimes she’ll come in and make them something else, like a fried omelette and plantains, and I don’t get why they aren’t eating what I’m eating.

Also I’ve occasionally had an upset stomach, and my host mom was convinced it was because I mixed two traditional foods that apparently don’t go together. Turns out it was just a fungus I got from contaminated water.

Weekends are a whole different ball game. On Saturdays I typically leave the house to do homework somewhere else, so I’m not sure what they do. On Sundays we don’t eat breakfast because we go to sports at 6:30. Then when we get back, we shower and go to church at 11:00, but there’s no food in between 8:30 and 10:30. Thank goodness I brought emergency packets of nuts for those situations.

After church we have lunch, and while we sometimes sit at the same table, the TV is always on and there’s no conversation happening. Then for dinner, I never understand. No one cooks a separate dinner, and so I assume I eat what I had for lunch? But the other day my sister asked if I was hungry, and then was like “you should make yourself dinner then.” So I cooked scrambled eggs and was so confused. Also, sometimes the kids just have bread and yogurt for dinner, like what?

I’ve cleared up the breakfast situation by proving myself worthy of making my own eggs in the morning. My host mom and sister made some comments the first few times that I ate my eggs without white bread, but now they’ve come around to realizing that I just like my eggs. Not that I don’t like bread, but when tasteless white bread is a complement to every meal, you tend to try and avoid it.

My other friends here also have had similar situations. One time on Sunday, my friend Becky’s host mother made dinner and it was ready at 4:00 P.M., so they ate then. But the whole time Becky was like, what do I do later when I’m hungry?  Another day, she said she wasn’t hungry at 3:00 P.M. for lunch since she ate breakfast at noon, and about 15 minutes later her host mom asked her if she didn’t like her food. Becky felt so bad because she loves the food, but she just wasn’t hungry!

At my friend Lily’s house, she tries to time when she eats so hopefully she’s in the kitchen at the same time as someone else, but she typically eats alone too. At her house, though, there’s always food on the stove, so she can always have a meal. They even have cut up slices of pineapple in her fridge!

That may not seem like a big deal, but having fruit in the house is rare. Turns out Cameroonians don’t eat a lot of fruit unless it’s an orange or banana sold on the side of the road. My host family used to have fruit in the house occasionally, and I’ve now realized it was because I was living with them and SIT told them that Americans like fruit and vegetables. Now that I’ve been there a while, I don’t get any more fruit since they themselves don’t eat it.

My other friend Maggie’s host family is one of the more confusing mealtime situations. They never showed her how to use the kitchen, so she relies completely on her parents to feed her. She doesn’t even know where dishes go or where to find salt.

The other morning Maggie finally asked if someone would show her how to use the stove so she could make eggs for herself since she didn’t want her usual white bread and jam. But she was told she couldn’t eat eggs for breakfast during the week. Eggs are explicitly for dinner and weekend breakfasts.

Oh, and people also eat with their hands a lot here. Not as much in Yaoundé, but it’s common in some of the other towns we traveled to. And while you think eating with your hands may be easy, I assure you it’s complicated figuring out how to slurp up mushy starch and a goopy sauce with your fingers. I definitely felt like a five year old learning to finger paint.

Meals are confusing here, and I don’t think I’ll ever quite figure them out. I typically tend to just eat when I’m really hungry, or when people tell me to, and I seem to be getting along okay. It is definitely true that I’ve never eaten sweeter papaya or pineapple than I have here, but I’ve also had to eat food that I had to mentally talk myself through so I could swallow. It’s definitely fascinating getting to know new food, but in no way does that mean that I don’t dream about cheese, multigrain bread, broccoli (and a host of other veggies), and just clean water that comes out of the tap.