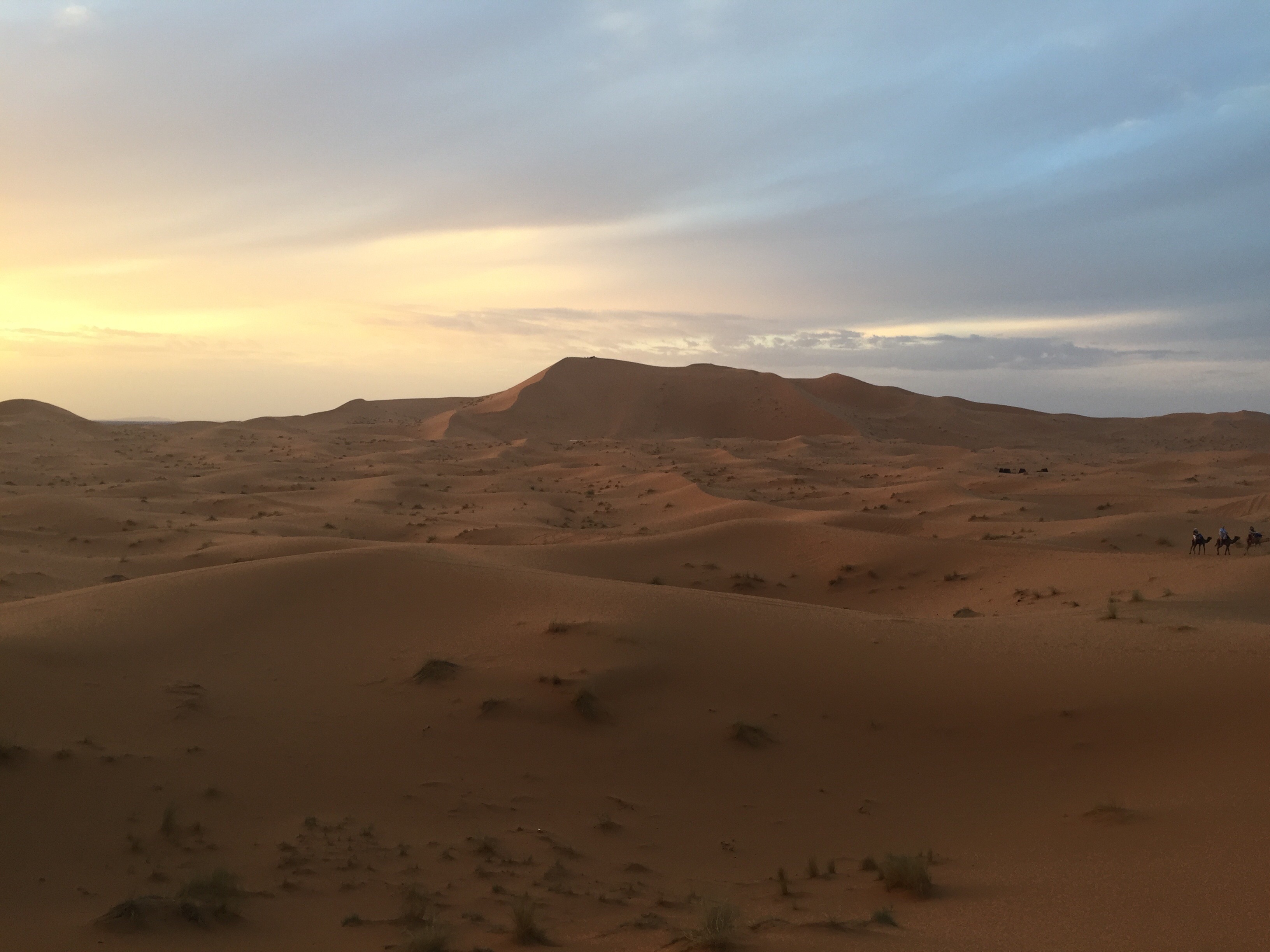 After spending another two wonderful weeks here, I can say without a doubt that I still love Morocco. My aforementioned excitement over the cooler and drier weather has been replaced by a more general excitement about all of the sights Morocco has to offer, and the last two weeks have been jam-packed with fun and unique (and occasionally educational) visits and experiences. Before departing for Ben Smim, a village in the Atlas Mountains, I spent one final day in Rabat exploring a local park and relaxing by the river. The drive to Ben Smim was quite spectacular; the first half was all beautiful sky and cloud cover, and in the second half we ascended higher into the Atlas Mountains and soaked up some stunning vistas.

Our hotel in Ben Smim was certainly one of the most interesting and entertaining places I’ve ever had the pleasure of staying in. The first feature we noticed upon parking was the huge bird nests covering all of the chimneys; the second was the swimming pool, our enthusiasm only slightly dampened by the fact that it was totally empty. The hotel had the strange feel of a place that was both past its glory days and also in the process of being improved. The empty swimming pool, abandoned underground dance hall and run-down facilities were certainly different from most of my past hotel experiences, but only endeared me more to the hotel. It also helped that the setting was so stunning; even though this section of the Atlas Mountains was not the highest or most dramatic (more on that later), it was still quite lovely and a welcome change of pace from our normal city stays. I also had the opportunity to see the Milky Way for the first time, which was just something else. I’ve spent most of my life in places with pretty bad light pollution, and being able to see the Milky Way and the full range of stars was incredible. I also saw more shooting stars than I normally would in a year; I’ll let you know if any of my wishes come true.

Later on in the week, our group was given the choice of heading into a nearby town to work at a cafe or hike in a nearby national park; despite having far too much work as is, I opted for the national park. After wandering through the woods for a long time, we found ourselves in the middle of a wide open meadow filled with cows, in the most calming late afternoon sunlight. This vibe was quickly killed by dogs barking ferociously at us (presumably with the intent of protecting the cows) but it was a great moment nonetheless. I also somehow managed to rouse myself for a sunrise hike the following day, which, like most sunrise hikes, ended up being totally worth it.

We returned to Rabat for one night, a celebration for the host families filled with music and dancing, before beginning the vacation period. I headed north to Tangier for the first half of the break, staying in a hostel in Tangier’s Old Medina. The Spanish coastline is actually visible from the waterfront in Tangier, which was very cool for me considering I haven’t ever been to Europe! Other highlights included reading on the rooftop terrace in our hostel and visiting the Hercules Caves; even though the caves closed for maintenance as soon as we arrived, I still got the opportunity to jump into the Atlantic, which was remarkably refreshing. Unfortunately, Halloween isn’t widely celebrated in Morocco, so I was definitely missing out on my normal level of costumes and Halloween candy. After two days in Tangier, I took a train to Fez to begin a guided journey down through the Atlas Mountains. As with many tours, the sights and activities were much more heavily advertised than the hours of driving that accompany sightseeing. That being said, I thoroughly enjoy long car rides, and everyone in our car was blown away by the scenery! After 10 hours of driving on the first day, we (myself and five other students) hopped on camels and made our way into sand dunes on the very edge of the Sahara Desert. Though my body was certainly a bit sore post-camel, the sight of the sun setting over the dunes is not one that I think I’ll ever forget.

After another beautiful night sky and a solid night of sleep in tents, we arose at sunrise and cameled (not sure if that is a word) back to our luggage and guide. The next day of driving was no less stunning than the first; we had the opportunity to walk through and explore one beautiful gorge, and our hotel for the next night was actually situated in the Dades Gorge itself. After spending the night there, we began the final leg of our journey to Marrakech through the highest part of the Atlas Mountains. The breathtaking, awe-inspiring beauty of these mountains was only tempered by the fact that half of our group (myself included) became violently ill on the car ride. Though this was not the ideal end to my vacation, we arrived at our hotel safe and sound with the chance to rest and recover. This hotel (where I’m currently staying) has awesome amenities (like a pool and fitness center) but is strangely populated exclusively by older German people. I cannot for the life of me figure out why they are all staying here together (they seem to all be great friends), but certainly can’t complain about them or the pool. The next two weeks promise to be eventful as ever; we will visit Agadir (on the coast) as well as observe the COP 22 climate change negotiations, which are happening in Marrakech, before departing for La Paz, Bolivia! Stay tuned for updates on said international climate negotiations and, more importantly, my German hotel-mates.