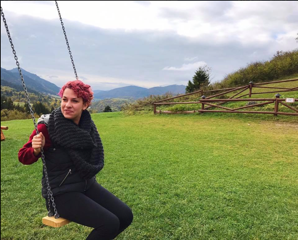 A package of bleach in Prague will cost you about a hundred Czech crowns. It can be purchased from any drugstore or Tesco. It won’t look like the bleach you would get back in the U.S., but maybe you’ll think it’s kind of exciting that all the little things are different here. Purple hair dye will cost another hundred crowns. While the box says purple and the people on the front have violet locks, this dye will turn your dark mane bubble gum pink. Throw in a comb, gloves, vaseline, and the other tools you need to create a new identity, and you’re still only out about 14 U.S. dollars.

When I was 17 I went on a week-long tour of what, at the time, felt like every liberal arts school on the east coast. Armed with a worn copy of Insider’s Guide to the Colleges and a jacket that I worried made me look “too high school,” I timidly explored all the realities that could become mine. One of the things I looked for in the student body of each school was the correct ratio of people who looked spunky and alternative to people who looked average. I measured this in conversations overheard, personal aesthetics and activities seen. At 17 I thought that this revealed something profound. I dubbed this measurement the “pink hair ratio.” Hampshire’s was too high for me. Bowdoin’s was too low. Vassar’s was exactly what I wanted.

The brand of dye that I bought is called LIVE and it has never not been applied less than four feet from a toilet. Grace and Miranda help me attempt to unravel the Czech directions. After we’re 85% certain that this won’t give me chemical burns, Grace dons gloves and begins to apply it. We listen to Girlpool as she works. An hour later I rinse out the bleach and find that my hair has turned bright orange. Not fun blonde or bottle platinum or even mousy brown—orange. I try to calm myself by remembering that part of doing this was about teaching myself to let go. Beginning to think this was a mistake, I slather on the color myself. I half-heartedly do homework as I wait for it to set.

There’s something about going JYA that makes us want to recreate ourselves. Before you leave everyone tells you that it will change your life. Have they told you yet about the people they know who met their spouses while studying abroad? Or those who changed their career plans? Or the ones who went back on a Fulbright? The pressure of becoming that new, older version of yourself, the one who’s worldly and in love and bilingual, lingers at the bottom of your to-do lists. Right after finish a paper, study for a language quiz and buy toothpaste is the expectation that you are growing at all times. Foggy-headed from this pressure and the stagnation of still not being able to really walk after two months of a torn ankle ligament, I storm into my school’s bathroom with my drugstore makeover kit in a plastic bag. Exhausted from always having to be The Foreigner I turn myself into The Girl With Pink Hair.

The Girl With Pink Hair knows where landmarks are and isn’t afraid to talk to strangers. She has fully formed ideas about her independent study project and is always confident in her fashion choices. When I remember to be this girl, I go in search of adventures. Midway through the semester my program goes on an eight-day trip through Poland and Slovakia to study the fall of Communism from the perspectives of other post-Communist states. We zip from Krakow to Zajeckova, to Banska Stiavnice, back to Prague. The Girl With Pink Hair grows familiar with places I had never heard of until arriving.

After a day of site visits she takes the only open seat in a bar and tells the man next to her that she’s traveling with the circus. She overuses the word adventure with him and asks him to pronounce staple Polish words for her. In Zajeckova, Slovakia she visits a vegetarian commune where she weaves a basket and learns traditional Slovak social dances. She finds a kitten outside and, despite her dislike of cats, she snuggles this one and she and her friend Alex fantasize about stealing her and naming her Pella. They could hide her in Alex’s hood through customs. The Girl With Pink Hair embarks on adventures spanning this side of the continent and never says no to anything.

The trip winds to a close and she and her program-mates are deposited in Bratislava, Slovakia. They step onto the train back to Prague to discover that it has been massively oversold. They squeeze through aisles full of angry, tired bodies past occupied seat after occupied seat. With each turn of the train the group splits apart more and more until they’re all stuck in various cabins alone or in pairs. The Girl With Pink Hair and her friend Miranda get trapped in between rows of drunk Slovak men celebrating an imminent sports game (or maybe it passed? Who really knows). They call out as the girls try to move, and even though they speak Slovak it’s perfectly clear what they’re saying. When The Girl With Pink Hair refuses to make eye contact, one of them hisses “sassy” at her, and as the train lurches forward she leaps away from his flailing hands. He leans out of his seat and mimes biting her when the seal of bodies breaks and she can stumble one row farther away from his whiskey breath.

I’m hiding behind this performance, but it doesn’t feel like he’s harassing The Girl With The Pink Hair—it feels like he’s harassing me. Finally trekking back to Prague I realize that The Girl With Pink Hair is girls plural and that they’re all more than manic pixie nonsense—they’re tired of gross men and they have self-doubt sometimes about the state of constant adventure. Finally in a train seat I snap open the seltzer I’ve been saving for a hundred kilometers and toast to the people who were really me all along.