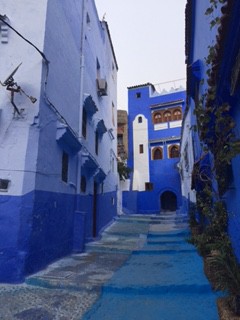 After a month in Vietnam, with its mid-90s temperatures and humidity ranging from 70 to 100%, stepping out of the airport in Casablanca into the dry, cool Moroccan air felt like paradise. Even if the weather wasn’t so perfect, I’m sure I would still be thoroughly in love with this country! Before making it to Rabat in Morocco, where we are now, our last few days in Vietnam were a bit of a whirlwind. On Sunday (October 9th) we said goodbye to our homestay families in Hoi An and flew down to Ho Chi Minh City, and we were on our plane to Morocco by Tuesday night. Ho Chi Minh City, the biggest city in Vietnam, provided an interesting contrast to the crowded streets of Hanoi and the relative quietude of Hoi An. The streets were wider (possibly due to the French colonial influence), the traffic slightly more sane, and the Western influence stronger than anywhere else we visited. Our flight to Morocco left Ho Chi Minh City at 8 P.M. on Tuesday night. The first leg of the journey was an eight-hour flight to Abu Dhabi, followed by a seven-hour flight from Abu Dhabi to Casablanca. Many of my classmates wisely elected to do classwork and get readings done; I decided to watch Rush Hour 3, play solitaire and sleep, in that order. I did manage to wake up to catch the sun rising behind our plane, one of the most magical sights I’ve seen abroad thus far (this picture certainly doesn’t do it justice).

After one night in a hotel and a day of orientation, on Thursday night we moved into our homestays in the Old Medina of Rabat. The Old Medina is a veritable maze of cobblestone streets and tight corners, making it hard to navigate at first, but many of the buildings are beautifully painted, so getting lost isn’t too much of a hardship. One defining aspect of my stay in Morocco thus far has been bread, called “khobz” in the local Darija Arabic dialect. I truly do not believe that I have ever eaten so much bread in such a short period of time in my entire life. I eat bread with cheese and jam for breakfast, bread alongside rice and lentils for lunch, assorted wheat delicacies at teatime (like fried dough!!), and bread with dinner as well. This emphasis on wheat products has made things something difficult for the gluten-free members of our group, but I have been having the time of my life to be totally honest. The other key (and heavenly) staple of food in Rabat and Morocco more generally is the mint tea, which can be seen and smelled everywhere and is always accompanied with a considerable amount of sugar. Another really awesome part of Morocco has been the abundance of patterns everywhere. It’s definitely a treat to have your eye caught so many times just walking through the streets, or even walking down the stairs!

On the topic of patterns and sights, the highlight of my time in Morocco thus far was undoubtedly my visit to Chefchaouen. Chefchaouen is glowingly referred to as the “blue city” and the “blue pearl of Morocco” in tourism literature; these descriptions make perfect sense once you get to the city itself, because all of the buildings are painted blue. After arriving Saturday night and having a delicious traditional Moroccan dinner, our group of six committed to waking up early on Sunday morning to try and catch the sunrise from an old temple overlooking the city. Led by a one-eyed dog we lovingly referred to as Buster, we made it past some much meaner dogs and over many slippery rocks to the temple itself, where we were greeted by a beautiful vista of fog and maybe 15 feet of visibility. After waiting for half an hour, the fog lifted for a blissful five minutes, during which we each snapped approximately 200 pictures each.

After the fog returned, we collectively decided that we were really hungry and returned to our hostel for a delicious breakfast of fresh bread, tea and jam. At this point the fog finally decided to lift for good, which was slightly frustrating but still made for an excellent breakfast atmosphere. Chefchaouen has a wide variety of interesting shops and restaurants, and exploring all of them occupied a whole afternoon. There was a shop full of scented candles, soaps and other aromatic goods, and I also decided to purchase a pretty blue rug to remember the city by. Before leaving the city for good, we hiked partway up to the temple again to view the city in full sunlight, and also grabbed some delicious strawberry milkshakes.

I absolutely love almost everything about this country so far, from the fresh bread to my incredibly kind and welcoming host mother to the beach five minutes from our classroom. We’re headed to a village in the Atlas Mountains in the next few days and have our vacation after that, so stay tuned for more patterns and mountains and definitely bread.