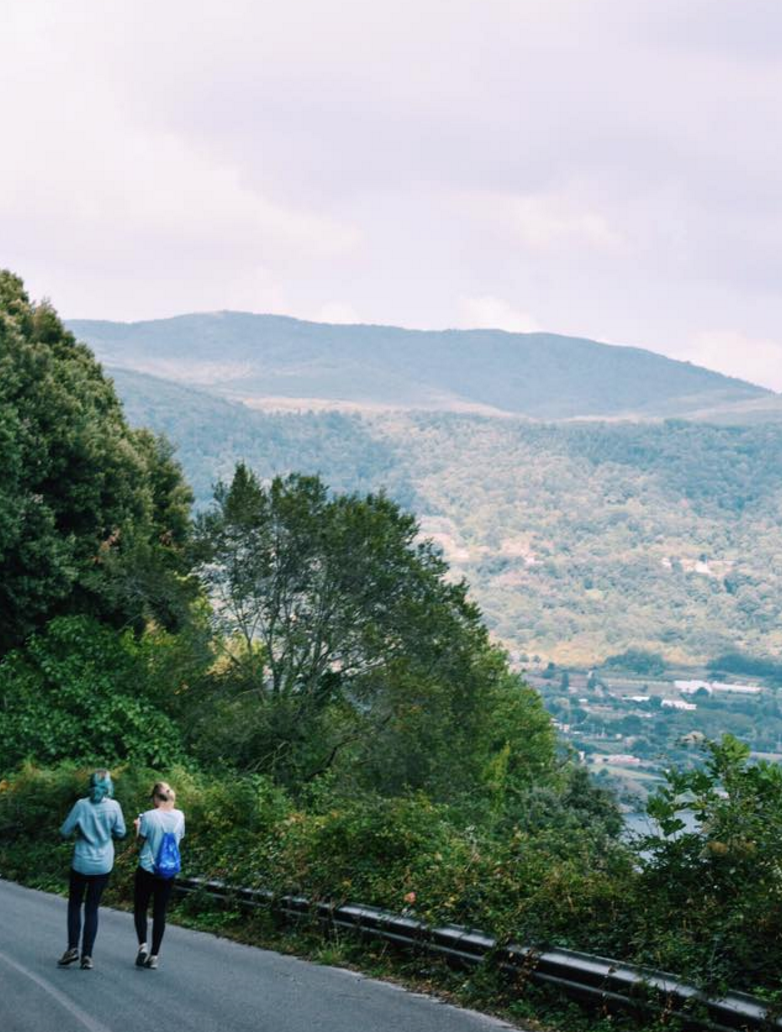 It had been a long day of traveling, and I was honestly desperate for a moment of inspiration. Our group had just travelled for hours from Rome to Paestum headed towards Sicily, preceded by a tough week for me with a Latin test, an Ancient City (ancient art, culture, architecture and archaeology) quiz and an art history presentation. It’s like the week before October break at Vassar when the professors feel the need to cram in obligatory midterms. On top of that, it was the week that marked two months of me being abroad—major feels.
By then it was time for the next stop in our journey—Paestum. Originally Poseidanio but changed after Roman conquest, Paestum was founded as a colony of Magna Graecia in the 6th century BCE. We, classicists, fawn over the remains of three massive Greek temples that were built there in 550 BCE, 500 BCE and 450 BCE to Hera and Athena—absolutely gorgeous, towering structures with lush, scenic backdrops and the shoreline nearby. It should’ve been a moment of inspiration—and it was, in many ways. The sheer sizes of the Doric temples coupled with the wealth and architectural precision needed to construct them were spectacular.
But ancient archaeology takes an emotional toll. It wouldn’t do the temples justice to not look at them in the fullness of their historical context—a history filled with both beauty and oppression. The temples are a lasting emblem of the intertwining triumphs, conquests and wars of the Greeks, the Italic Lucanians and the Romans—histories ranging from the awesome to the terrible.
Internalizing the gravity of those histories is hard, and being with those temples after an already emotional week felt more like a weight than a transcendence. It reminded me of another site we had been to, which had carried similar gravity in my heart. A few weeks ago, my group went to the Museo Della Navi di Nemi in Praeneste, which once held the ships of Nemi. Dated to the first century CE, the two ships were found in the late 1920s and early 1930s—supposedly the party boats of the emperor Caligula. They were so large that one had an entire Roman bath complex onboard.
At some point, the massive ships sank in the nearby lake Nemi, close to the sanctuary of Diana in Praeneste. They wouldn’t be discovered for almost 2,000 years, at which time the Italian government would spend a huge amount of money to drain the lake and recover them. In a way, the Nemi ships became a cultural symbol for Italy – still a relatively new nation at the time. An entire museum was built with a specific architectural design for housing the ships. In 1944, Nazi forces occupied Praeneste and a precious symbol of Italy’s ancient past—the Museo Della Navi di Nemi. When the Italians came back after the Nazis left, the ancient ships had been burnt to ashes.
My professor called it the saddest museum in all of Italy. Now filled with a few Nemi ship remains and other trinkets from antiquity, the place feels heartbroken and empty. Our group was floored. It was one of those moments where you could feel the pain in the silence. Walking around, I could see my classmates try to put on brave faces even though I knew they deeply felt the accost to Italian and Roman culture and history. Amongst the deep sense of connection to the past one feels upon visiting ancient sites, there is yet another sense of loss at moments like these.
Flash forward, there I was—thinking of the lost Nemi ships as I stood in the gorgeous, towering temple of Hera, waiting for that inspiration which should have been overwhelming.
Finally, we were given break time, during which we all rushed to the Napoli coast. My classmates and I were so excited to be in the Mediterranean—immediately we were racing and throwing balls and jumping in the waves. In a rush of lukewarm October Napoli water, surrounded by my classics family, the inspiration came flooding in. I found myself just standing there looking out into the sunset (truly a Kodak moment) and feeling rich with experiences. I looked onto the surrounding shores and thought of the temples, the Nemi ships, the italic lucanians, the Greeks and the Romans.
My friend, Love, who had also found himself frozen in the setting sun, looked at me and said, “It’s triumphal, dude,” and I couldn’t agree more. Contrary to the feelings of loss I had felt for the ancient peoples and their decaying history, I then felt inspiration—and triumph. It was the kind if triumph that humans have craved and killed for, the kind I felt while reminiscing in the memories of material beauty and simultaneously surrounded by natural landscapes and a community of people. But I realized that it couldn’t have existed without my empathetic feelings of loss.
You have to appreciate people and places and pasts for the entirety of what they are—not some romanticized, convoluted version. The truth is, we can learn anything or take anything from the pretty parts of the past, but the the darker parts can be the most informative and even the most beautiful. It’s even more amazing to be able to experience it all within the context of this community—certainly feeling blessed.