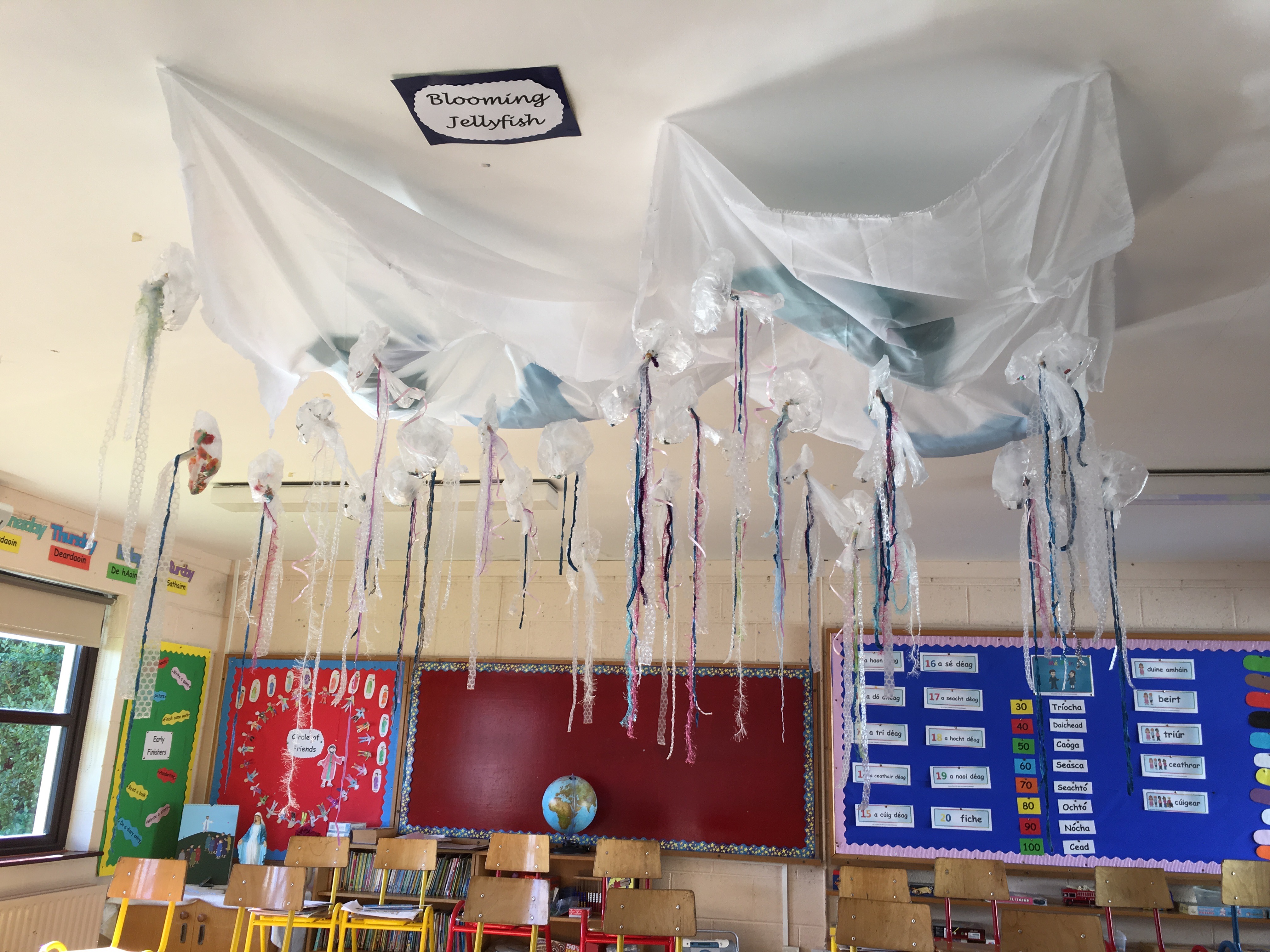 Studying abroad in Clifden during the fall semester involves an extra perk: The Clifden Arts Festival! The little town becomes transformed as the population doubles due to the influx of tourists. Regular school curriculum gets pushed aside by opportunities to meet with world-renowned poets, musicians, and artists. It is honestly refreshing how much the educational system here values the arts. This year was the 39th anniversary of the festival, which was actually started by my internship director, Brenda Flynn. Due to our status as students and our connections with the school system, Jake and I were generously allowed free admittance to every performance. We went to an incredible concert by the Kilfenori Band, which is one of the oldest Céilí bands in Ireland. Legend has it that Michael Jackson spent at lot of time with this band during his time in Ireland and used their music as inspiration for his iconic song “Smooth Criminal.” The concert ended with a surprise performance by one of the best flutists in the world, Sir James Galway, nicknamed, “The Man With the Golden Flute.” We also attended a one-man performance of Beowulf and another one-man performance depicting the life of the Irish Antarctic explored, Tom Crean. My knowledge, as well as appreciation, for the Irish culture grew exponentially throughout this magical week from the many poetry readings, concerts, galleries and plays I attended.

While I thoroughly enjoyed all of the professional performances I attended in the evenings, I think that I enjoyed Arts Week in the primary school even more. A musician came to teach the kids about the history behind traditional Irish music. He told stories of household gatherings where people would use things such as spoons and pots and pans to make a beat. He then introduced a variety of percussion instruments and explained the origin of each. I was very impressed with how attentively the students listened to his stories. Next, it was our turn to make some music. Fortunately, I got to join in! I am working with second class, which means they are seven or eight years old and were very excited about becoming musicians. The students were split up, and each group was given a different instrument. He taught a different beat/sound to each of the groups of students, and then had us all come together. For the beginning of the song we would follow his beat, and then he went into the solos where each of the different instruments got to show off the beat they had previously practiced. We finished the song with a “grand finale” where everyone just went crazy making as much noise as they could. It was fantastic to see the kids appreciate music and the culture connected with each of the different types of instruments. 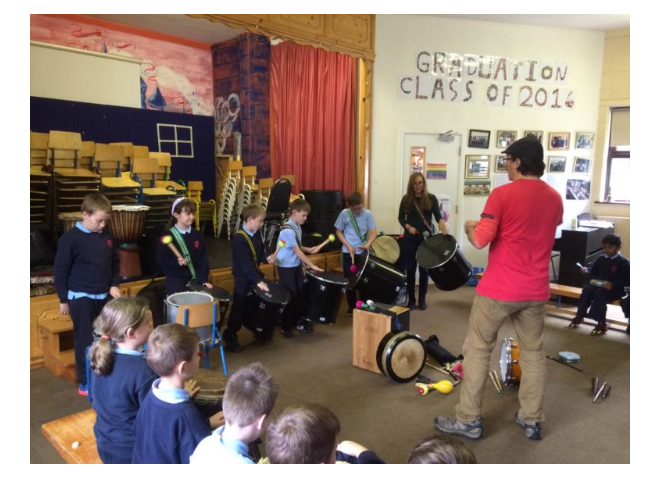 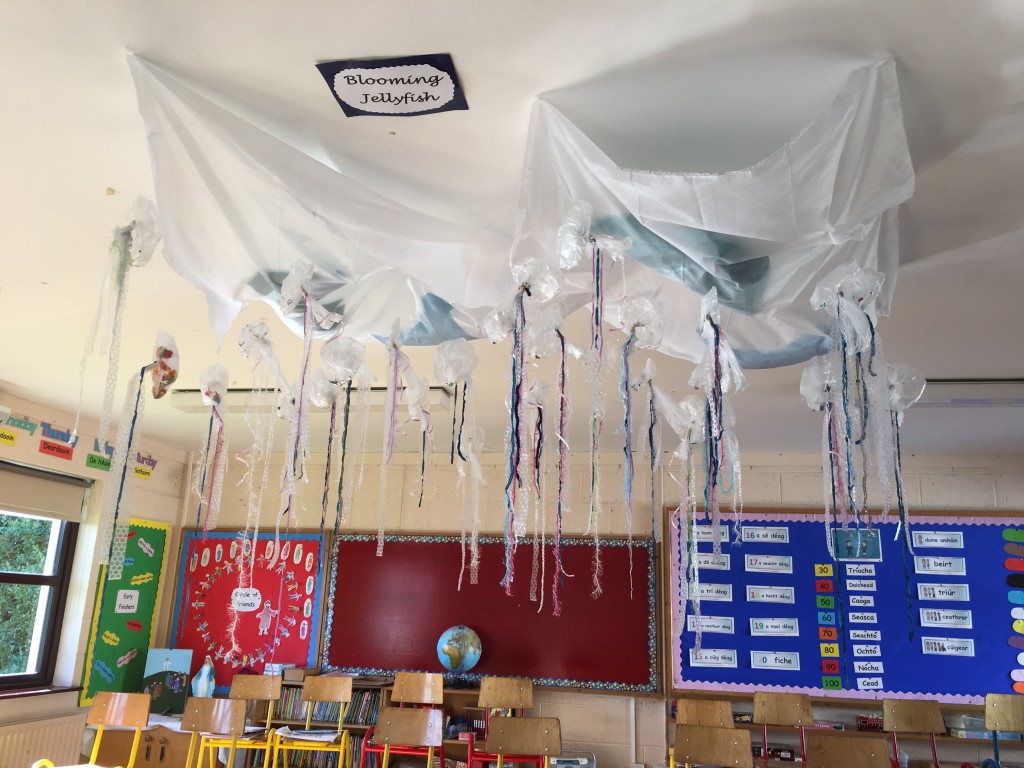 Another exciting event from Arts Week was getting to milk a cow and then turn that milk into butter! A father of one of the students in my class brought his cow to school one day. Imagine that! There was a pen set up in the corner of the school where the cow was calmly eating potato peels. The farmer demonstrated how to milk a cow, and then patiently let each student of our class have a try. I got to milk a cow! It is definitely more difficult than it looks. He took the milk we had collected home where he strained and refrigerated it. Each day he would take the cream off of the top of the milk and put in into a separate container. After three days, he came back with the cream he had collected in a butter churn.  Again, he gave all of the students a chance to turn the handle and churn the cream. Everyone was buzzing about who would get the “magical turn” when the cream would get think enough to be considered butter. I did get a chance to use the butter churn, but I unfortunately did not have the magical touch. Actually, no one did because he had to keep it churning for a while after the last student had gone until it eventually became butter. Only cream turns into butter. So, the milk that was originally mixed into the cream stays a liquid, and this is what we call buttermilk, which is used a lot in baking.  He scooped the butter out of the jar and molded it into a rectangular prism using special paddles. Fresh butter is very soft, so it needs to be placed in the refrigerator for a period of time before it becomes the consistency we expect from store-bought butter. Also, the fresh butter obviously doesn’t have any salt in it yet, so it has a different taste. People started salting their butter for preservation since unrefrigerated butter turns rotten pretty quickly.

Arts week was a wonderful adventure filled with many once-in-a-lifetime opportunities. I appreciate all of the artists who came to share their passions as well as the teachers and committee members who put so much work into making it a smashing success!