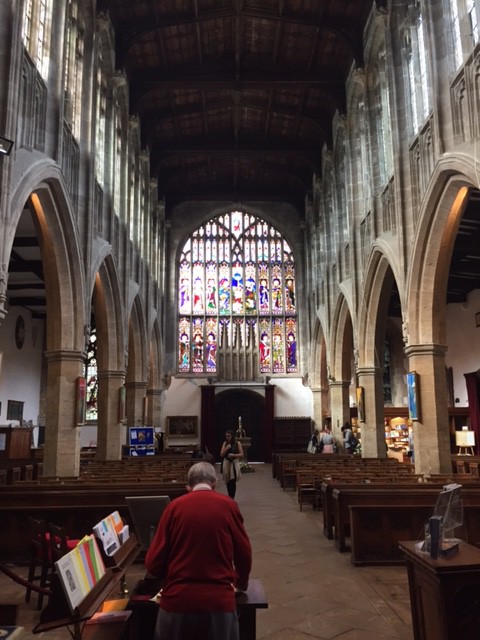 I’ve almost been in Jolly old England for a month and yet it feels like an eternity. That’s the thing about big cities. You spend a week or so in one and then consider yourself a native.

For various obvious reasons, I’m not quite a Londoner, and one of those is this American accent that seems to follow me everywhere. In nearly every conversation I have at a café or a tube station, it takes the other person a few seconds and a head tilt to respond. Being an American comes with a set of assumed opinions. Everything in America is bigger, sugarier, and unhealthier. And to many Brits, that’s a point of jealousy. The candy tastes better and there’s more of it for less.

The other big topic that comes up with being an American abroad is the Presidential election. Just the other day I was talking to a falafel maker and, before I could even put my order in, he brings up Trump and the joke he is. Everyone it seems is invested in this election, not just us Americans. It’s going to be fascinating voting in another country.

Luckily, my classes at BADA allow me to take a break from the world of politics. As my week starts, my the day starts at 7 a.m. and I’ll get back to my flat at 7 p.m. Within this month, I’ve had to learn heaps of scenes and monologues. By the end, I’ll probably be able to recite a whole Shakespeare play.

The benefit of learning all of this is that I’m able to try roles I might not otherwise get the opportunity to. One of the great roles any classical actor sets their eyes on is Hamlet. Regardless of your opinion on his misogyny and mopiness, he’s a difficult character that provides a challenge for an actor. I’m currently working on the ‘Get thee to a nunnery’ scene, and it’s probably one of the hardest I’ve ever confronted. But the payoff’s been great, with the challenging words feeling very fulfilling. It’s stretching my emotional capacity and shaping a new way of how I approach scenes.

Besides just attending classes, we’ve seen our fair share of shows, about one each week. We saw the Royal Shakespeare Company’s version of Doctor Faustus by Christopher Marlowe. This is a play that’s a classic tragedy, yet their ensemble burst into a musical number. I shuddered the whole time.

We also saw Threepenny Opera by Bertolt Brecht at the National Theatre, with Rory Kinnear starring as Captain Macheath. He is quite a talent and it was impressive. The set fell apart and in a Buster Keaton-esque moment, a sheet fell right on top of him, Kinnear breaking through and scaring the audience in the process.

The following week, we took a day trip up to Stratford, home of the Bard himself. I’d been once before a few years ago, but it was with my dad and he made us wear these weird hiking backpacks which was just awkward. This trip didn’t involve that. Instead, I walked around with one of my roommates as we explored the banks of the Avon river, including the church where Shakespeare’s buried.

Seeing his grave inside, I took a long moment of silence to reflect on who was in front of me. Before me lay the man whom Western civilization revolves around, giving us some of the greatest texts to bear witness upon. He’s also one of the reasons Sparknotes is so popular. It was quite a powerful moment. It was a nice moment of the day, before we saw a three-hour production of King Lear that caused at least 60% of the audience to fall asleep. The one souvenir I got from the trip was a book of Shakespeare characters imagined as cats, aptly named Shakespeare Cats. It was quite a day.

Besides shows for the program, I’ve also gone to see shows on my own. Tickets can be really cheap and any show gives you something to learn from, be it good or bad. Independently, I’ve seen 946: The Amazing Story of Adolphus Tips at the Globe (standing as a Groundling again), The Play That Goes Wrong, which was right in so many hilarious ways, and Yerma.

There was quite a journey in getting to see Yerma at the Young Vic with Billie Piper. Tickets were sold out and it was closing with only a few days left. The great opportunity for the Young Vic is the returns line. I had a few friends that waited and got in, so my chances of waiting were very hopeful. The first day, I got there at 5 p.m., with the show to open at 7:30 p.m. Sadly, I didn’t get in, with four people in front of me. I did, however, get to see Timothy Dalton, who was probably there to see her Penny Dreadful co-star, and Matt Smith from Doctor Who. I tried again the next day to no luck.

The third day I showed up, Friday, was the day before it closed, and we were doing the Stratford trip that day, so this was my last chance. I got to the theater at 1:30 and waited until 7:30 to get in. Nerves were high the entire time, and I probably waited a total of 12 hours for a return ticket over the three days. That day, the gods were in my favor because, with 10 minutes before the curtain was to go up, I got a ticket. I also saw Geoffrey Rush and Liv Tyler at the show, which wasn’t bad.

The show itself was astounding. The language was quick and it reached an emotional catharsis I’d never thought possible. One scene takes place in the rain, and they managed to make it rain onstage. Billie Piper’s performance shook me. For the last half hour my mouth was open, amazed at the sheer beauty and madness of what I was witnessing. For the time I gave and the high expectation I had, this surpassed it in every way. I laughed, I cried, and it was better than Cats could ever be, with or without the rap song. I left the theater only able to say “My god.” from the utter brilliance of this performance. I’ve spoken enough now I think, but the saga of Yerma was worth it wholeheartedly, and I hope to see and make theatre like it in the future.