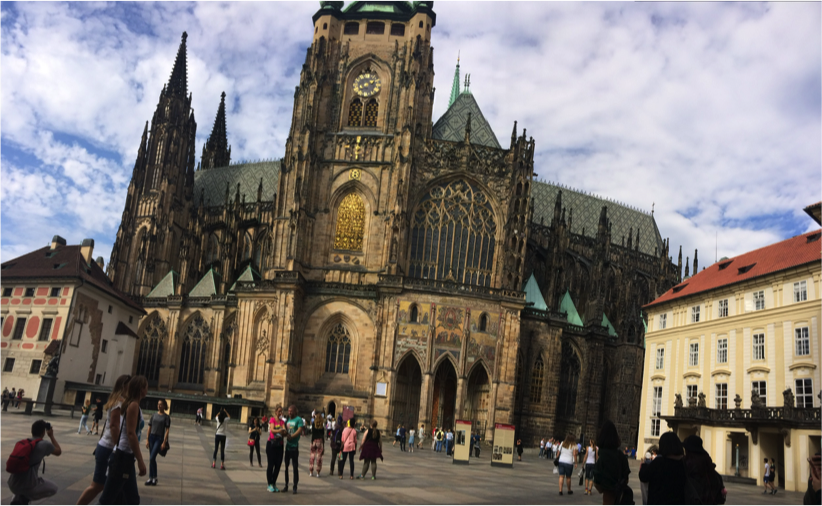 The great thing about studying abroad is the new places and people you meet. The bad thing about traveling abroad is that if you don’t know the language, you end up wandering aimlessly for a month trying to figure out basic language skills. For example, try saying “Welche sprachen sprechen Sie?” three times in a row. Despite initial language barriers, I feel somewhat integrated into the German lifestyle.

The last month in Germany has exposed me to new experiences and new friends. Whether it be through traveling to different cities or sitting down in the college servery for dinner, I have definitely made connections that will last a lifetime. It is in this atmosphere that I am very grateful to have celebrated my 20th birthday.

My host family very graciously cooked an authentic Southern German dinner for my birthday. Despite time conflicts (German class ended at 8:45 p.m.), my host sister and I arrived at our host families’ place to enjoy pretzels, sausage, a vast array of cheeses, dumplings, sparkling wine and homemade apple flan all prepared by our host mom’s eldest son. Everything was mind-blowing, especially the homemade flan. Though it had been a month since I had arrived in Germany, this was my first genuine German meal, and I was glad to have shared the experience with them. Over dinner, we discussed school, our lives back in America and the current political elections. Because of our rousing discussion, we both ended up staying for dinner until nearly 12 a.m., but it was totally worth the sleep deprivation the next day. 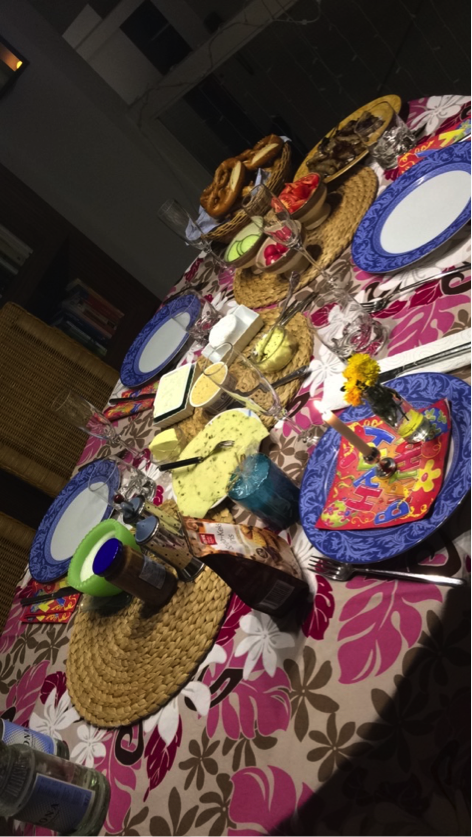 One great thing about studying abroad in Germany is the limitless possibilities of travel. Germany is centrally located in Europe; therefore, it is relatively easy to plan weekend trips to explore other European cultures. This past weekend, a group of us exchange students visited Prague in the Czech Republic for the first time. Prague is a cultural hub and has contributed to the arts vastly through literature, architecture and music. 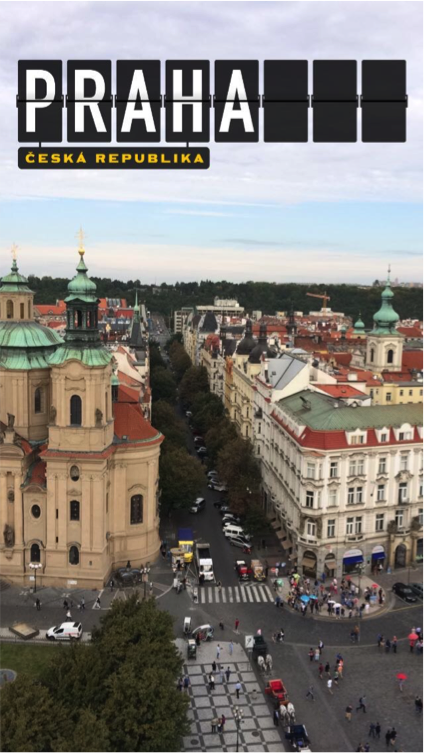 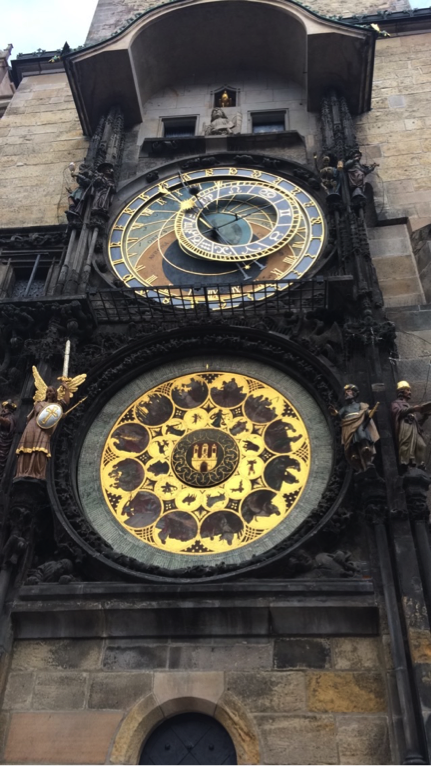 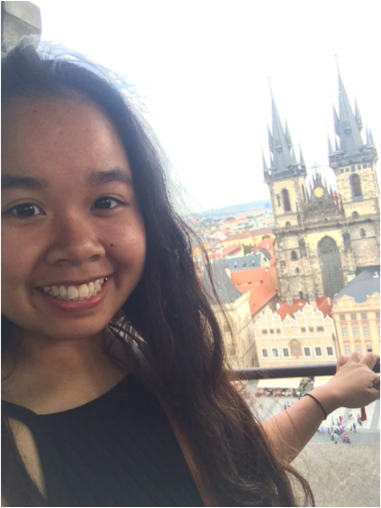 Our first day in Prague centered around Old Town Square (Staroměstské náměstí). It is here where both Baroque and Gothic architecture can be experienced simultaneously. From the observation deck on top of the Old Clock Tower, one can experience the panoramic view of not just the Old Town Square but the entirety of Prague. Despite being afraid of heights, I willed myself to walk up the stairs and experience firsthand the stunning scenery. 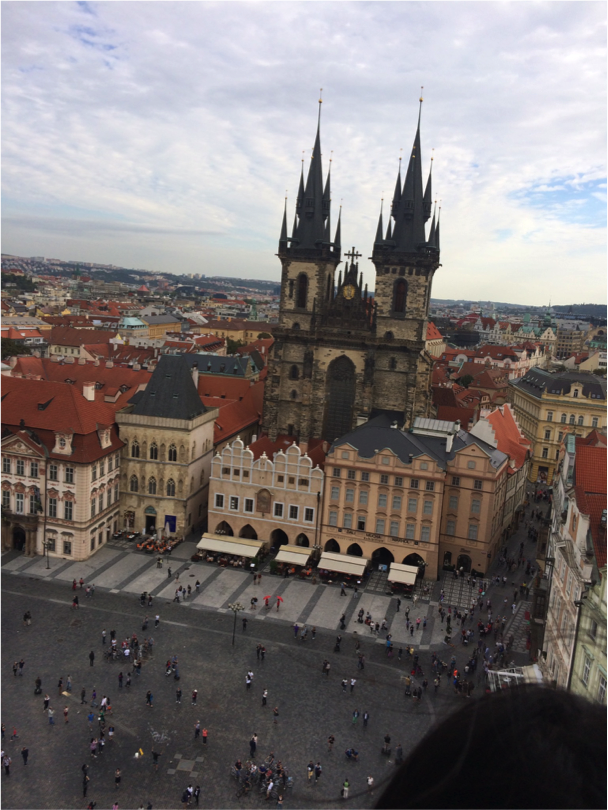 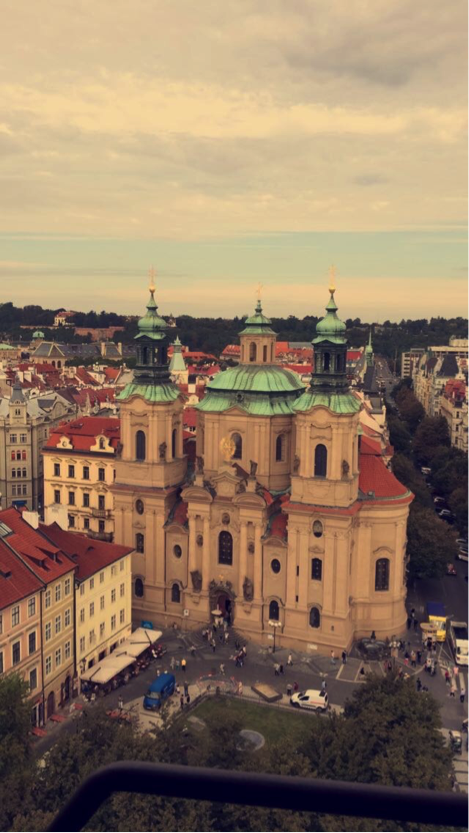 From the Old Town Square, we trekked our way up toward western Prague toward Prague Castle, experiencing the sights and sounds of the bustling city. Prague Castle itself is not just one building but over thirty palaces on the grounds, including the famed Saint Vitus Cathedral. It is in Prague Castle grounds that the empire of Bohemia was housed and where the President of the Czech Republic is based. Its focal point culminates in the large gothic structure of the Saint Vitus Cathedral, the biggest church in the country. It was totally worth the thirty flights of stairs to climb up to this view. 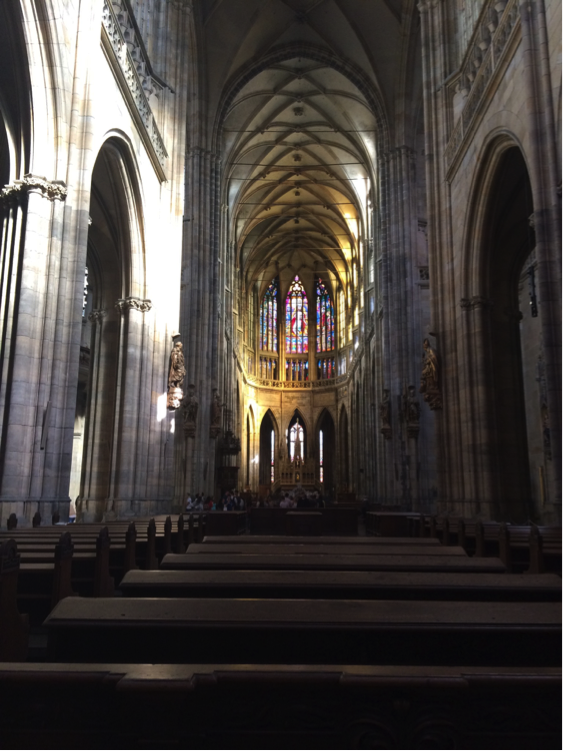 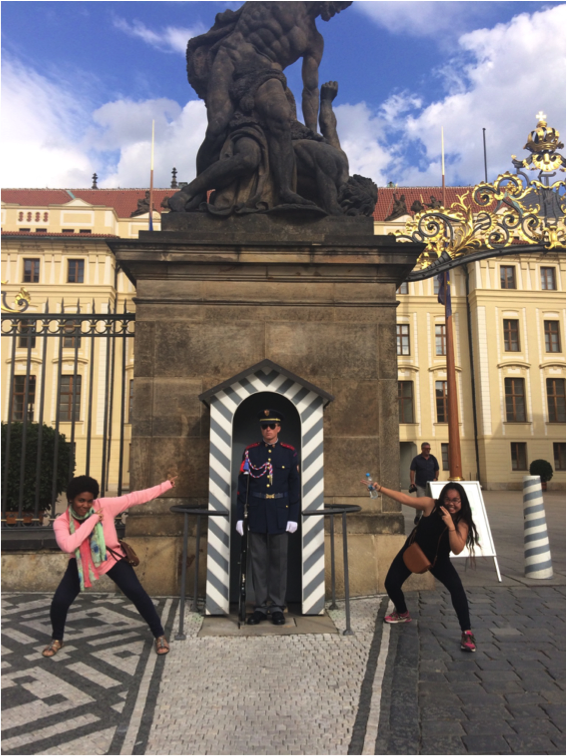 The following day, a group of us decided to an educational tour around the city to learn more about the intricate history of Prague through the centuries. Headed by our tour guide Czech David (there are three Davids in the company and we ended up with the one of Czech origin, hence his self-assigned name), we started out in Old Town Square and visited the Rudolfinum, the Jewish Quarter, the Estates Theatre (Stavovské divadlo), which is the only remaining original structure where Wolfgang Amadeus Mozart himself performed that still stands, Kafka House, and the intersection between Old and New Town Prague. 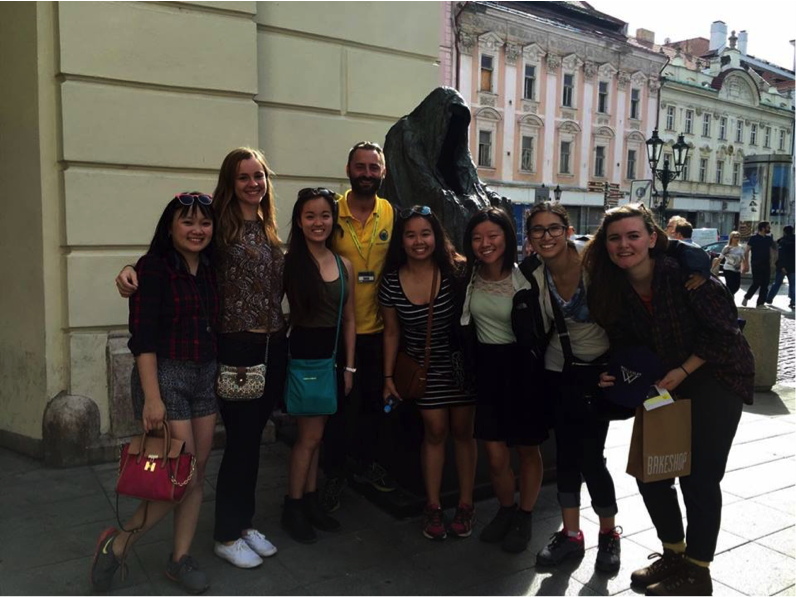 After the tour ended, we walked through Prague finding various churches and interesting places, stopping occasionally for gelato and bathroom breaks. Another tourtisty thing to do in Prague is to walk the Charles Bridge. It is here where you can find local vendors selling jewelry, paintings and souvenirs. The Charles Bridge was the original connection between the castle grounds and the rest of Prague. Monarchs of all kinds strode through the cobblestones and the original towers of the stone bridge. To walk through the same path and to experience the same views from thousands of years ago was just one of the highlights of this trip. 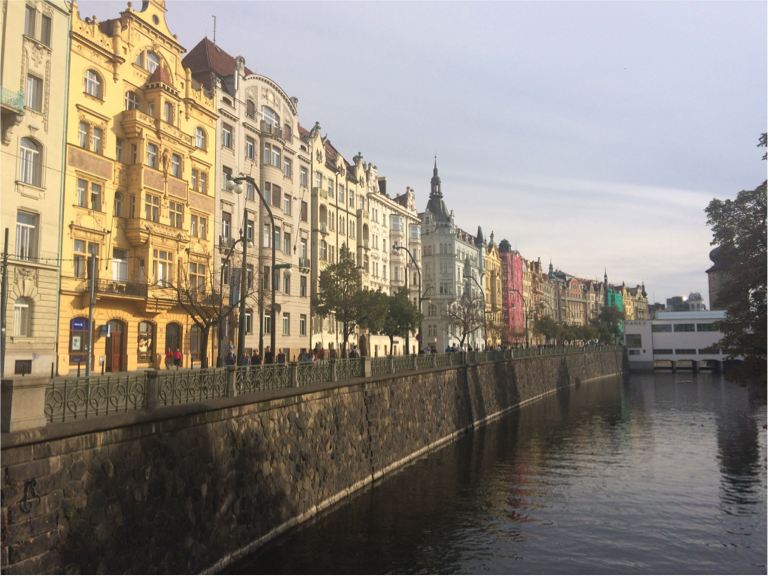 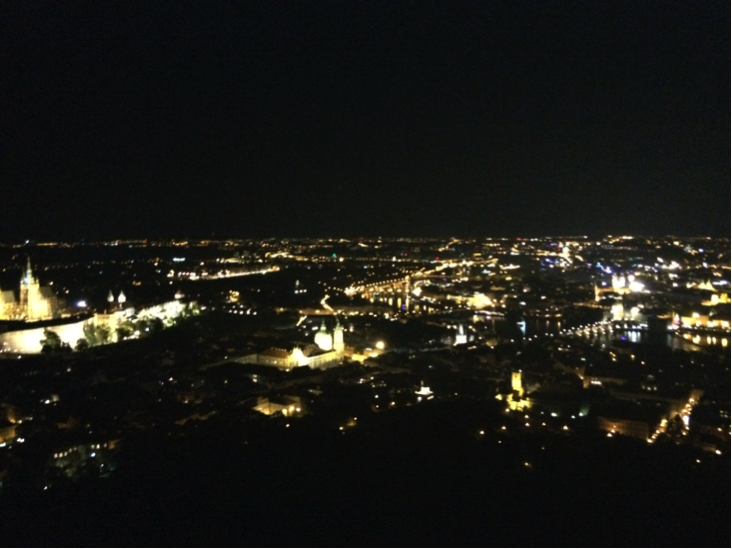 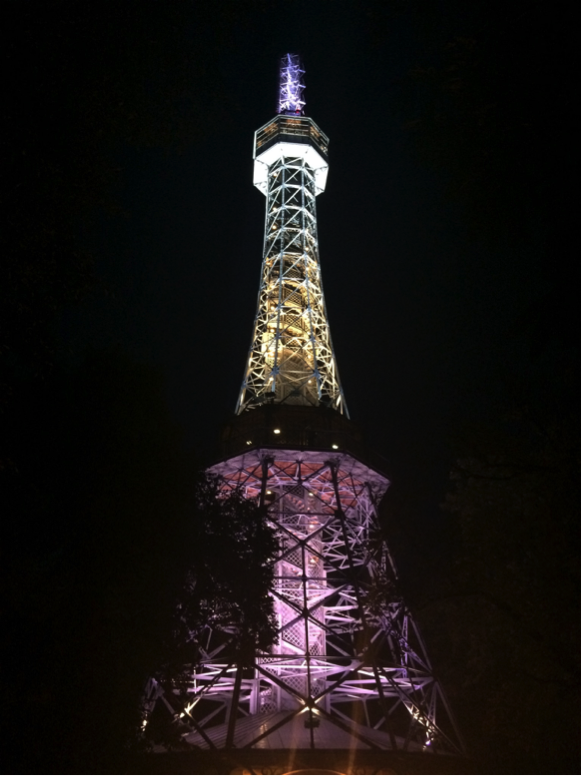 If Prague is beautiful during the day, then it is just as breathtaking during the night. After dinner, the group of us decided to stroll through the hills of Prague in the dark. Eventually, we stumbled on the Petrin Lookout Tower (Petřínská rozhledna), which looks very much like the Eiffel Tower. With enough time to spare before closing time, we were able to climb up to the observation deck. At first, the heights really got to me to the point where I headed down because I was too overwhelmed. But seeing as how I paid 65 korunas, I decided to get my money’s worth and climbed up the stairs again, keeping my eyes averted from the ground. And I’m glad I did. I did, however, take the elevator down after experiencing the magnificent panoramic sights.

One thing that is a must in Prague is to taste the local beer (pivo!) as recommended by our tour guide from earlier, Czech David. So we headed to a beer hall near our hostel to experience it for ourselves. Like the non-beer person I am, I was given apple cider as a substitute after telling our waiter that I didn’t like beer despite the fact that I was in a beer hall. He was clearly amused by the group of seven American young women who were clearly not typical customers. But I am told that the beer was good, and the atmosphere was lively and entertaining. Cheers or Na zdravi!

Unfortunately, the weekend ended as quickly as it came and we were soon back on a nine-hour bus back to Germany ready to tackle on another week of classes. Děkuji Praha! 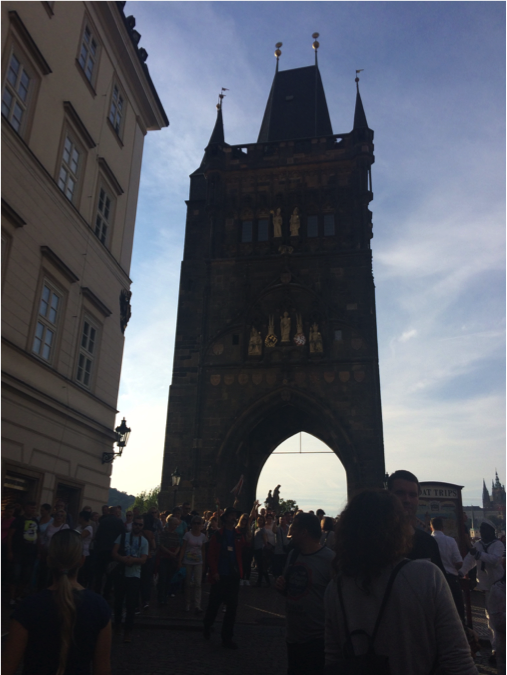 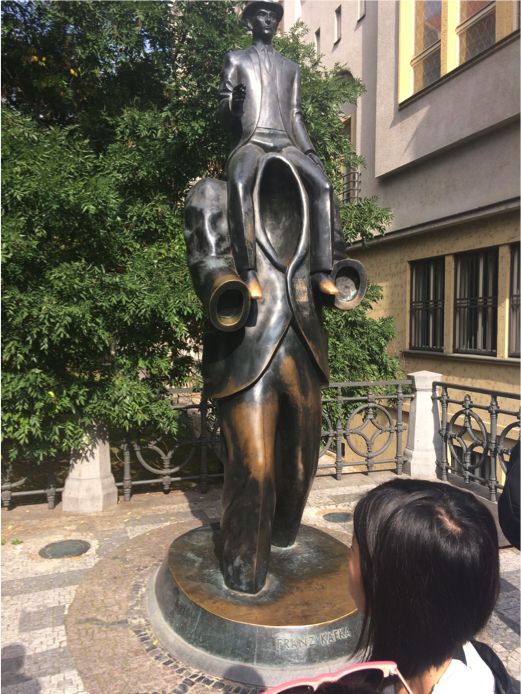